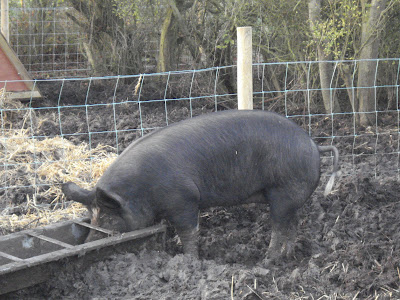 When I went to feed the pigs this morning only two little piggies ran to greet me, whilst Maud and Martha ate their breakfast of pig nuts and apples, Betty was still in her bed.
I went to see her and she was on her side with laboured breathing and seemingly unable to get up. Never has someone been on the phone so fast. The vet was called, the lovely Carron was called for Betty knowledge (Carron was Bettys former Mum until I came along), she gave good advice but obviously the arrival of the vet was the only way I could get an idea of what was wrong with Betty.
My hero arrived just 30 minutes later, and strode manfully through the mud (well limped pathetically really, he had a squash injury!) and gave Betty a throrough looking over, an antibiotic shot and an anti inflamatory shot too for good measure, and described her as a 'very poorly pig'.........well that's what I already knew!!
Seemingly she most likely has a bacterial virus that just needs antibiotics and bed rest, alternatively and more worrying is that it could be a twisted gut caused by a slip. After her second injection Betty with our help had struggled to her feet and made an effort to get out of her ark, but, sorry Betty, she is confined to quarters for a couple of days to make sure it's not a pulled muscle or a twisted gut that knocked her off her feet. 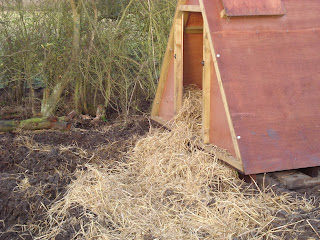 Bed rest and TLC with a shot of antibiotic every day is the order of the vet. If Betty does the bed rest and I provide the TLC, that only leaves the injection for Lovely Hubby to administer each day, lucky him. (Don't worry he has been trained to do this!!)