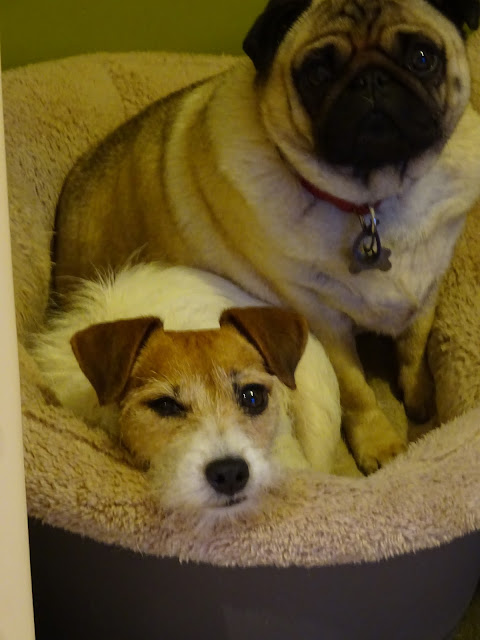 Mavis is around five, officially of course we don't know her age and her previous owner was less than forthcoming, so we didn't press for any definitive information.  When we first took her to the vets just after she came into our lives on 31st December 2013, they estimated her age by her bone structure and her teeth, so officially on her vaccination record she is down as having a birthday of 1 January 2011.  So in a couple of weeks she will be five.

Absolutely in her prime  :-) 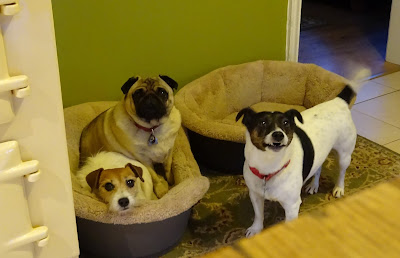 Having three dogs does tend to mean that they get less one to one time with me, but I do try and give them that whenever I can.  They get individual outings with me, and of course Rosy is often out and about with Lovely Hubby as she loves to ride in the cab of the truck with her Dad.  As pack leader I have been the one to train them, and whenever I can I fit little training moments into their days to keep them learning and fresh with their tricks I do.

When Rosy was young she learnt her doggy ways from Sophie our beloved Border Collie, anyone who has or has had a Border Collie knows that they are the nearest dog to a human there is.  Training a new dog with an intelligent older dog that does the command immediately it is uttered is a doddle, and thus Rosy knows as many words of the English language as it is possible for a Jack Russell to know.

We've tried all the spelling of the words so she doesn't pick up on what we are saying when we are discussing the possibilities of a walk in wet weather.  But even W. A. L. K.  spelt quietly out means get to the door fast we are on our way somewhere exciting, as does 'should we have a perambulation along the prom', a jog round the field etc etc.   We've given up ... she knows we're going out before we do!!

Mavis on the other hand came into our lives knowing only orders, following a pack of dogs for information on what would happen next, hoping one would get it right and therefore none of them would be punished ... and at all costs to keep out of the way of any raised hand or booted foot.

She flinches if you move suddenly, presses herself into her bed if something scary startles her, and ducks low if she doesn't understand the words leaving your mouth.  Because of this she's harder to train.   Repetition leaves her fearful, the tone of your voice if impatience leaches into it even slightly, means the end of you loving her .... in her mind .... and she shuts down.

So to train Mavis I work slowly, imperceptibly slowly, she doesn't know she being trained.

It takes me an average of one to two months to get a command into her sweet little brain so that it can stay there.  She's learnt sit and stay.  She knows that 'wait' is for her own safety and she will wait, watching your face intently all the time for confirmation she's doing it right.  As the only dog that wears an extendable lead on our paddock walks she was apt to get herself wrapped around trees when she went this way and that, so I spent over our allotted two months teaching her 'round' ...  she got it!!  She now knows if I say 'round' and she backtracks her last few steps, the lead will magically free itself from the gate post or tree and once again her freedom will be there.  She can even double 'round' and free herself from two obstacles.  I'm proud of my little girl for this trick, neither of the other two have the faintest idea what 'round' means.

I made the mistake of trying to teach her to 'high five' after reading about it being a marker of a dog's intelligence in an article .... big mistake!!  A hand in that position strikes fear into her heart and her eyes, we tried it twice ... we won't be trying it again, she doesn't need to know how to high five.

Last week she had her fastest ever lesson .... 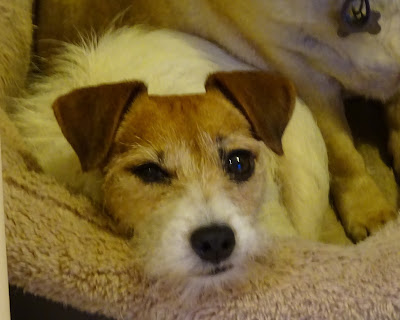 It was harder to photograph than it was to teach her.

Where is she at the moment I can almost hear you asking ..... 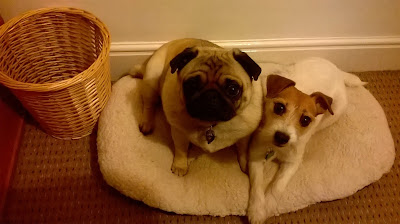 ... she's on the Blogging cushion with Suky!!

While I am on the computer my two little companions in crime sit on the old dog cushion at my side,  watching to see when blogging time will be over and snoozing peacefully away until Mum springs back into action with something that will be much more interesting to them.

The next little trick we are working on is 'paw'.  I simply wait until she is sat next to me on the sofa and every now and then, just a couple of times a night, I lift her paw and say the word.  The first few times she lept off the sofa, now she is at the stage of just looking at me slightly bemused.  The other two both do this easily and have since they were tiny, and of course Rosy being the little show off she is does 'other paw' and 'other, nother paw' (three handshakes) with great gusto, Suky does it with much trepidation ... she has extremely ticklish feet, and one day very soon Mavis will join in and that will be one more trick under her collar :-) 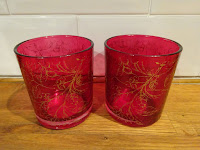 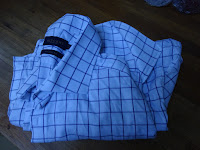 I didn't post yesterday as I was feeling pretty yuk, just a bad cold no need to worry, but luckily I had already sorted out two things to go.  Two Christmas candle holders and a dress shirt that Lovely Hubby no longer wants.