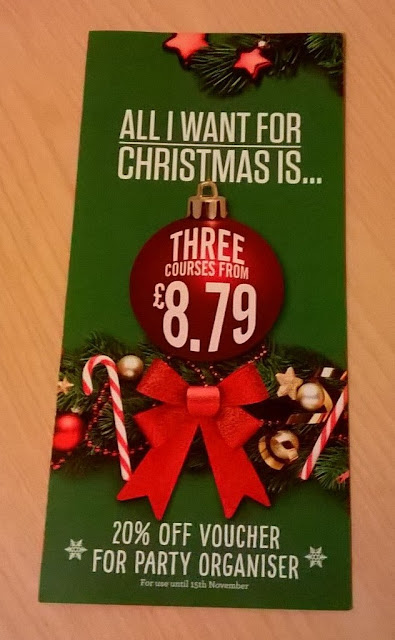 Last week was our eighth wedding anniversary. as I had been lucky enough to be asked to review the new festive menu at The Bells of St Mary's in Prestatyn we asked if we could be booked in on our anniversary.

We were lucky and that's exactly when we went.

We were greeted warmly by the lovely chap behind the bar, we should have asked his name but he was busy and other people needed his help so we kept things brief.  He got our drinks, opened the tab and then invited us to choose a table to sit at.  The restaurant was quiet as we had chosen to go for a 6pm meal due to the distance we had to travel, but the folk that were there were lively and chatty and it was a brilliantly informal atmosphere.

We had a look at the offerings on the carvery table, had a chat with the cheerful chef and one of the other kitchen  lads and then sat with the menu and made our choices. 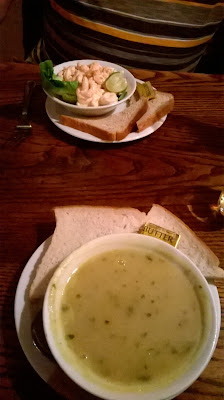 Lovely Hubby started with a Prawn Cocktail, a real blast from the past but he just fancied it.  I had the Roast Parsnip soup.  I'll let you into a secret .... I don't like parsnips, but this was the only veggie option on the starters ..... it was delicious, I am a convert!!

The only thing we both felt left the starters down was the cheap sliced bread, a small bread roll would have been much better and most likely not added much cost to the course. 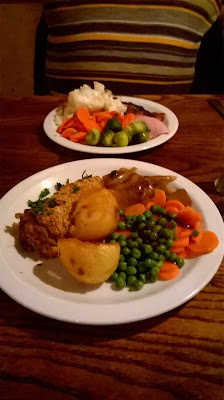 The mains we chose were a two meat carvery selection for LH and I had a Sun Blush Tomato and Squash Kiev with a selection of vegetables from the carvery.  The vegetables were delicious, all steamingly fresh straight out of the kitchen and you could help yourself to as many Yorkshire Puddings, vegetables and as much stuffing as you wanted.  The gravy was all suitable for vegetarians which I thought was a nice touch.

The mains were delicious. 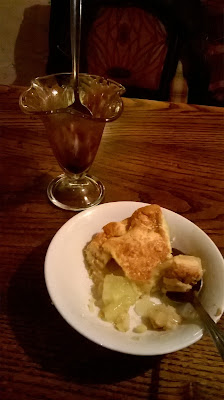 And I think this photo just shows how good the puddings were ... we got stuck in the minute they arrived and then remembered to take a photo!!

Lovely Hubby had the Profiteroles, and I chose the Apple Pie, which usually comes with custard or ice cream, but I had it plain .... deliciously so, it tasted completely homemade. 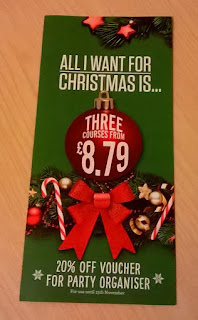 And the exceptional thing about this lovely three course anniversary treat was that  it was £8.79 a head!!  So with a glass of cider each on arrival and then another pint for LH and a sparkling water for me as I was driving, the whole bill came to less than £25.

Where else can you get good, wholesome food and two drinks each for this price, well I guess other Crown Carvery establishments .... we will have to look out for them on our travels.

The absolute stars of the night were the staff ....  everyone from the chap that greeted us and got our drinks, the chef that chatted about the food and explained how everything worked with the carvery system to the smiling girl that delivered each course and kept all the tables cleared as folk left the restaurant were lovely.  It was nice to go to such a friendly, relaxed place on our special day.

I would like to thank Chloe at Spotty Dog Communications who offered us the opportunity to do this review, she was warned that I would say it exactly as I found it and I have.

A brilliant night, with good food and excellent company.

Happy Anniversary again my Lovely Hubby ... now where are you taking me next year  ;-) 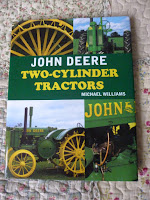 A book all about John Deere tractors, it didn't feature the one that Lovely Hubby restored so he's donated it ... he doesn't actually know yet .... ooops!!      ;-)