The Smallest Room in the House 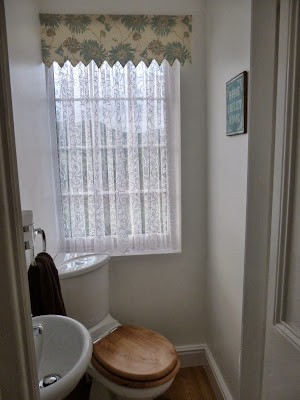 After the big reveal of the kitchen yesterday ... even though it's not quite finished, I thought I would show you one room that is totally finished.  The smallest room in the house.  With a downstairs bathroom you really do appreciate having an upstairs loo in the middle of a dark cold night and having this is brilliant.  Although we are having some troubles with the cistern, she flushes when she wants to and puts the Niagara Falls to shame in the sound department when she refills.  Being an unusual shape and very small is really hampering DIY attempts at fixing it. 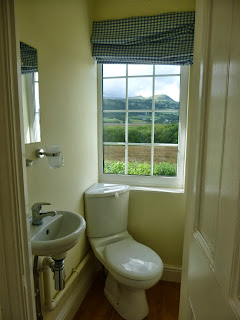 This was how it was when we viewed the house, 'the loo with the view' and although we would have loved to look at the view you are obviously facing the wrong way to truly appreciate it when in action so to speak and anyway the very same view is right next door in the office which has the other two thirds of this window, so it was not the end of the world to spare the blushes of passing motorists as well as our guests by hanging a net curtain. 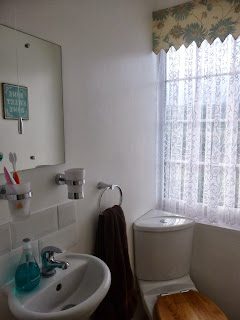 And have you spotted something in here yet .... yes, you're right .... this is the one room in the house that is not getting a flash of green.
We have recycled in here, the pelmet was originally in our bedroom in this house, the nets are from the spare bedroom at our old place, the little 'Home Sweet Home' sign was in the kitchen here left by the previous owners, well they had to really ... they had stuck it to the wall with double sided sticky tape!!  The towel is one I never got round to using back at the other house, so we bought a matching pedestal mat to hide a bit of rough flooring under the loo.  We also bought a new oak toilet seat and a new cup to go in the holder.
It was of course the hardest room to paint being so tiny but Lovely Hubby persevered and now it looks lovely and fresh, for not too much outlay.
So that's two rooms shown, now would you like to see another one tomorrow or would you prefer to see the 'not so little' chicks again, they grew amazingly while we were away, or are you feeling greedy and would like to see both?
Sue xx