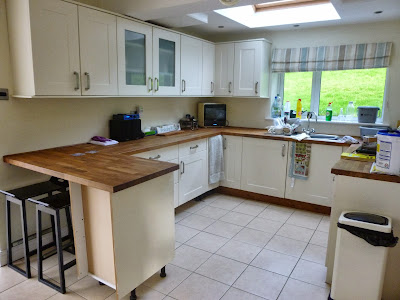 One of our main priorities over the last two weeks was to get the bones of the kitchen in place.  We have yet to decorate it but now it is all ready to start painting. 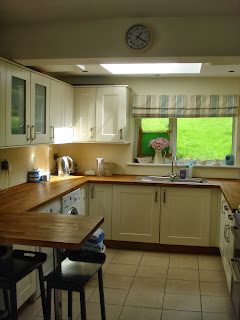 As it was when we viewed the house.
The first job was to re-model it slightly, the last owners had a washing machine and tumble dryer on the left hand side just behind the breakfast bar and a dishwasher under the sink.  We don't use dishwashers or tumble dryers so we decided to put our new washing machine into the gap we would make by removing the dishwasher (we phoned them up and asked if they would like it back and they said yes and came to pick it up).  They took their washer, drier and electric cooker with them when they moved out so we had a large gap on the left-hand side of the kitchen which we filled with the unit that had stood next to the cooker.  This then left us plenty of room on the right-hand side of the kitchen for the Aga.
We paid for a days labour from a qualified joiner to help us with all this. 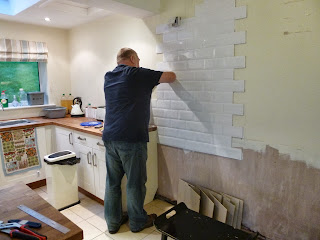 Once the large cooker hood was removed from the wall Lovely Hubby soon got stuck into the tiling, using our choice of plain white 'Subway' tiles.  We were advised to have the tiling in place before the Aga was installed, the walls were no problems but the floor tiles took forever to set!!  I really think LH was losing the will to live by the end of the first week. 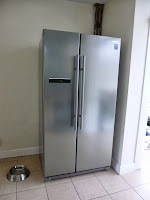 Our lovely new fridge freezer arrived on time and fitted into the end of the kitchen perfectly.  At last nice cold butter and milk, and we were able to shop for more than one days food at a time. 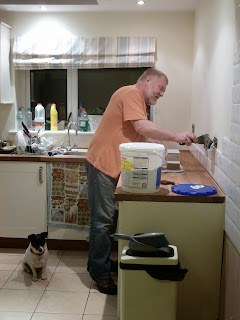 The tiling went really well, obviously the little doggy supervisor made sure that LH kept going. 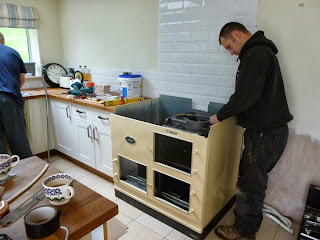 And then it was Aga installing day.  I've waited so long for this.
It was really fascinating to see it being built from scratch.  Every panel and part arrived carefully wrapped, with the ovens being carried in by both the installers as they were so heavy.  I think they thought I was slightly crazy popping in every few minutes with a paint brush in my hand to see what the next stage was :-) 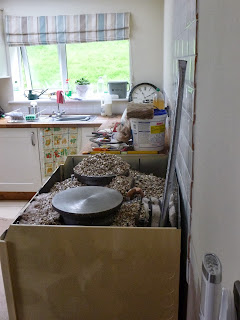 Once assembled and checked it was filled with little chippings which were then carefully packed into every nook and cranny with the rod in the foreground.  The guys did a brilliant job and it was installed and working within about four hours. 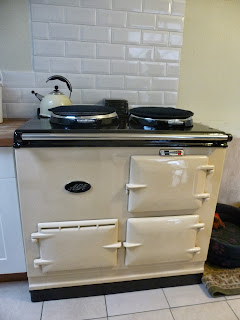 After a quick wipe down, she looked lovely.
She is a reconditioned electric Aga bought from Twyfords  and I really cannot praise the installers enough.  Hopefully by next Summer she will be being powered by our solar panels and saving us lots of money as she keeps the house lovely and warm. 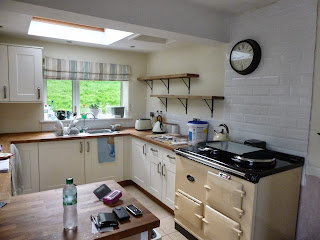 Later in the week the shelves, made by cutting a left over piece of worktop into three, were put up so that we will be able to paint over the pencil marks and drill holes when we start decorating the kitchen next weekend.
It's all looking so good, and now that the Aga is in place there is a steady hum of warmth that permeates through the entire house. 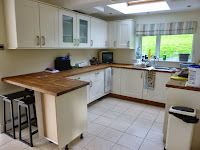 The gap at the end of the run of units is to be filled in with a bookcase that LH is building with some of my Dad's wood, that will house part of my collection of cookery books and it is supported by a small single cupboard that was next to their washing machine.

But the star of the show is most definitely my 'new to me' Aga.
I'm a happy girl :-)
Sue xx