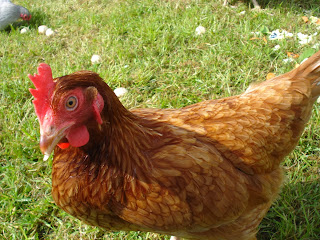 This Blog post was going to be called 'The Chicken That Ate My Earring', then something amazing happened.
The other day whilst cleaning out the henhouse, on my hands and knees and with as usual always one too many chickens than really can fit in the henhouse with me inside there as well, little miss naughty chicken (above) decided that the flash of gold from my earring was just too tempting and she had to have it.
I didn't even realise it was missing at first it was later in the morning after washing my hair I realised I was 'earring-less', remembering the attack on my ear I knew where it must be.  Obviously my first thought, being the kind chicken mummy that I am, was  'Oooh I hope it passes through alright', yeah right my first thought was something a little bit more like 'bl**dy gold robbing chicken', nope I'm not the angel some of you might think I am :-)
I told Lovely Hubby about my earring theft and he just said 'well at least now I know what to buy you for Christmas' ... typical man!!
Next day back on chicken shit mucking out duty I had my eyes peeled, in a vague and very unhopeful manner for my gorgeous little stud earring and guess what ..... there it was!!  Lying glistening in the nice clean bedding staring up at me .... miraculous!! 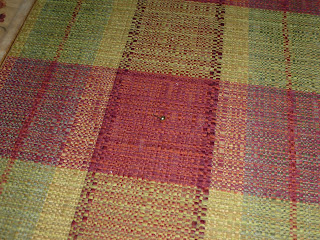 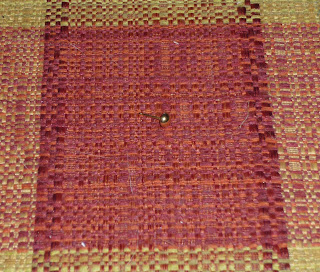 In close up.
Knowing I had a few spare earring backs because I am always losing my earrings, I was as happy as Larry and brought it back indoors to sterilise in some boiling water.
Then while getting changed from my workout, guess what I spied lying on the bedroom floor ..... the back of my earing.
It must have been stuck to the back of my ear when I came in to get changed from cleaning out the henhouses into my workout gear the day before (yes I am currently on three changes of clothes a day, it's getting tiring, I really must sort something out after all I'm most definitely not Sindy or Barbie needing to be changed over and over).
So I now have a pair of gold stud earrings again ..... and this post would have been totally not needed to explain my lop-sidedness, but I just thought I'd mention it because some folk think chickens are a little bit daft and can't see very well .... 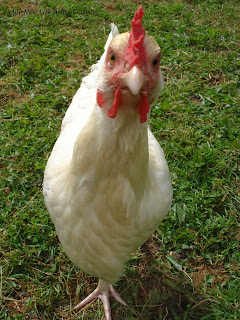 ... WRONG.
They have better daytime eyesight than us.  Seemingly they have more cones in their eyes that can distinguish colours, movement, shiny things (bugs as well as earrings) and whereas we may look down and see the grass they see a whole sub-culture in the grass, tiny movements of potentially edible things on the soil beneath.  They are also long-sighted in one eye and short-sighted in the other, hence their cute tipping their heads from side to side movement, watch your chickens when a large bird flies over they will all tip their heads the same way to watch it's progress and make sure they are safe.  They manage this little miracle when they are in the shell, a couple of days before hatching the tiny chick turns it's head so that one eye is near the shell and the source of light and the other is tucked down looking at it's own body so the eyes develop slightly differntly, amazing.
Their only downfall is their night vision which is why they take themselves off to bed as soon as the light dims and dusk is upon us,  and now that the clocks have gone back this means our chooks are all tucked up in their henhouses by 5.15pm which makes for a perfectly long evening to have our tea, sort out some more stuff for packing and generally have a little bit of time to ourselves.
So  be warned ..... watch out if you glisten near a chicken - it'll have you!!
Sue xx