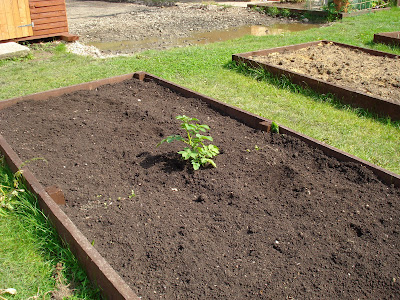 All our potatoes are harvested (well almost). This is a late bloomer that showed her face after the bed had been dug and then weeded ready to rest for a week before re-planting with other crops. We are leaving her for one more week just to see what we get!
We have done surprising well for potatoes, the first harvest was in the first two weeks of July, these were dug up slightly earlier than they should have been as the dreaded Blight struck two of our beds very hard.
Although we were warned that harvesting them the way we did, (because of the blight and in our rush to save the spuds) we chopped the plant tops off one day and dug up the potatoes the next, would cause them not to keep too well, we have been pleasantly surprised. What we should have done, I now know, is chop the tops off but leave the potatoes in for a week or so, so that the skins could toughen up a bit. 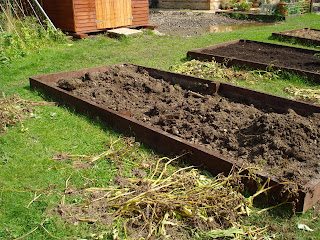 We are still eating the baby new potatoes as they are, just boiled and then served with parsley and a knob of butter, and the larger ones we have either as boiled, mashed or (yummy, yummy) cut into wedges sprinkled with sea salt and garlic and roasted in the best olive oil for 40 minutes in the Aga . And this is now seven weeks after harvesting and they still taste lovely and fresh.
We are storing them in hessian potato sacks in our utility room which is quite cool, but unfortunately light, so we do lose a couple every now and then because they turn green. I think we are going to have to do a Tom and Barbara Good storage system next year, and use a spare bedroom, kept cool and dark to store our supplies. 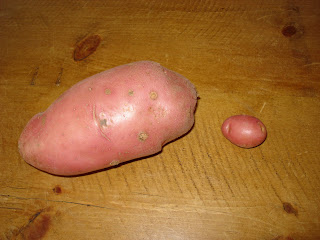 Then last week we dug up the final bed of redskin potatoes. I should know the names, but although I carefully labelled the boxes containing the 'chitting' potatoes I forgot to transfer the labels to the beds after we planted them (ooops). Next year I will be more efficient. 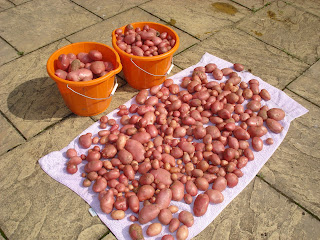 We managed to get just over five and half stones of potatoes (thats about 77lbs).
Next year I think I should also check what the costings are for all this and see if we save any money by growing our own, as well as the obvious advantage of having such gorgeous fresh, organic spuds.
#
Because they are all keeping so well we have not had to eat potatoes at every meal as I thought we might. As much as I love potatoes I could not think of a breakfast dish I could face after eating them for lunch and dinner the day before.
#
The only drawback is that because we have so many I tend to cook too many at once, sometimes I use the cold, cooked leftovers to make a potato salad for lunch the next day or as a last resort the chickens seem to enjoy them as a snack with their corn.
#
This morning I have been weeding in the veggie beds and in the polytunnel. In the PT all of the planted seedlings (except the celery) are now showing their heads above the soil, in fact the radishes are already turning red and expanding. I'll take some photos later to show you tomorrow.
Have a lovely sunny day.
Sue xx
Posted by Sue at 09:18