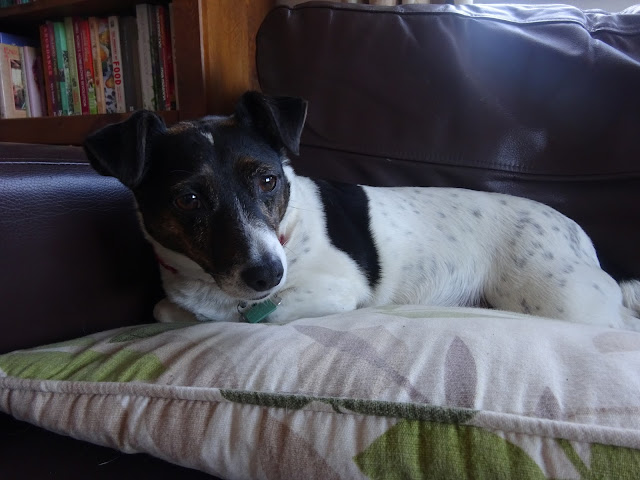 Rosy appears in lots of my posts, in the background, snuffling around in Chicken World while I clean out the henhouse and photographing the chickens as I did on the last post.  If I'm in the polytunnel she's out and about round the Veggie Patch or on a rabbit chase in the woodland.  If Lovely Hubby gets ready to go out in his truck she's there eager and waiting to take her place in the front seat next to him, watching the world go by from the side window.  She's our constant companion and loyal little girl.  Well she's not so little now she'll be seven years old in May of this year. 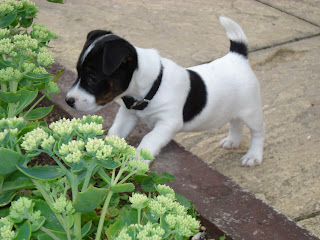 She came into our lives during the Summer of our first year living this country life,  when she was just eight weeks old, and was taught 'chicken manners' by the hens that loomed over her, she tried to grab one by the tail and got such a telling off from it that she never attempted it again.  She learnt good manners and all things 'dog' from Sophie, our Border Collie that she absolutely hero worshipped from day one with us. 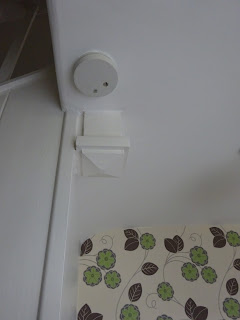 Well the night before last the smoke detector started beeping at me, you know that annoying 'cheep, cheep, cheep' that signifies the battery is running out.  When did it start this ..... why about ten minutes after I fell asleep just before midnight.  I think someone programmes them to do this just to be as annoying as possible!! 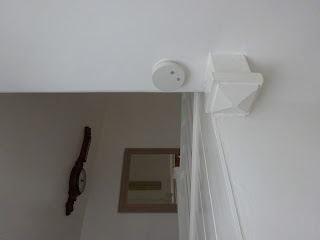 I staggered downstairs took took the offending battery out and left it, and the casing on the ledge in the hall to remind me to go out and buy a replacement the next day.  I went back to bed and slept soundly .... because I have a little back up smoke detector in my gorgeous girl.

The kitchen door was opened a jar, so the dogs would know to stay in their own beds and I went back to bed, knowing that if by any chance a fire broke out my little black and white clever girl would be by my side letting me know.

Because Rosy is super sensitive to the smell of burning, she has never been trained to be so but she cottoned on very early in her life to the fact that burning smells trigger smoke detectors .... and she hates, hates, hates the sound they make.  So at any whiff of slightly burnt toast or if an ember falls from the fire onto the rug she comes and sits closely by mine or Lovely Hubbies side pressing her whole body against your leg trembling from head to foot.

I felt guilty putting in the replacement battery this morning because of course I had to press the test button to make sure it was working.  It was .... and Rosy was by my side before I had even stepped off the chair. 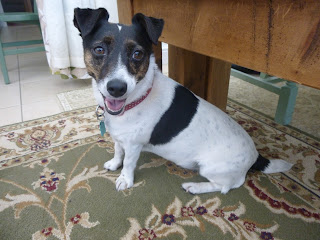 With this skill she would have been a perfect little assistance dog for a deaf person, she picks up things so quickly she would have been very trainable for all other sorts of tasks and she sometimes seems to speak English and completely understand things we have never ever taught her!! 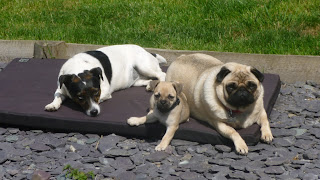 One occasion we found this out was when our darling little Charley was hit and badly injured by a car.  In a complete state of shock and fuelled by adrenaline she took off up our hillside deep into the woods.  Lovely Hubby and the driver of the car were hunting for her for half an hour before I returned home.  I immediately pulled on my wellies and started to join the search.

Seeing and hearing nothing I called for Rosy and said 'Rosy find Charley', she set off up the hill on her mission and reappeared after five minutes with little Charley slowly following her. Rosy shot out through the undergrowth to my side but Charley with her badly injured leg and hip could not find a way through the dense mass of brambles and branches, and in her fear and pain doubled back out of view again.  We couldn't reach her at all.

Once again I called Rosy back to me and said 'Rosy find Charley, she's stuck .... SHOW HER'.  Rosy vanished from sight and returned almost immediately with Charley behind her, step by step, inch by inch she led Charley down through the brambles, checking behind her every few steps and using her body to make the opening in the dense brambles bigger for Charley to pass through.

She had never been taught any this, she had never been instructed with these words and yet she knew what I wanted from her.  And sadly, as most of you know, Charley was too badly hurt to survive her injuries and we had to make the heartbreaking decision to have her put to sleep.  Rosy grieved for weeks and even now if we mention Charleys name there is a flash of sadness in Rosy's eyes.  She has lost three of her playmates, Sophie, Archie and then little Charley and she misses and remembers them all.   I guess the downside to intelligence is the ability to make true friends and lose them during your lifetime. 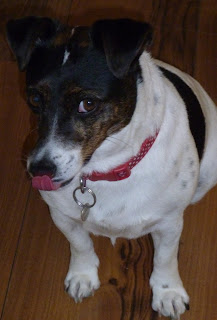 But .... before we get all maudlin and tearful, we have to remember the upside to intelligence is the ability to cause mischief and to know that you are causing it ..... and enjoy it all the more.  The naughty snatching of your sisters toys because you want to kill the squeak that lives inside them, the burying of your bone under Mum's freshly dug flower bed because the soil there is easier to turn over and hide your prescious treasure, and then adding your sisters bones to the stash ... just in case you get peckish later.

The upside to intelligence is knowing that you are loved and playing on it, sneaking quietly to Dad's side just before he puts the last tasty morsel into his mouth knowing that with a quick tap with your paw on his leg you can announce your presence and hint with your eyes at the starvation you are suffering and your absolute need for that tasty titbit.

She lives a lovely life our little Rosy and she makes our lives even rosier with her presence, which is exactly how she got her name.  We were driving back from picking her up, on a lovely sunny August day in 2009, she was a tiny trusting pup sat in a blanket on my knee not knowing what life had in store for her, and we were so looking forward to introducing her to Sophie, our Border Collie and I simply said 'isn't life rosy at the moment'.  We turned and looked at each other and said 'that's her name'.

So she is Rosy, not Rosie as in the name, but Rosy in the way she makes our lives just that little bit better by being part of our family.  All our animals have their own back stories as to how and why we got them and how they got their names..... this is Rosy's.