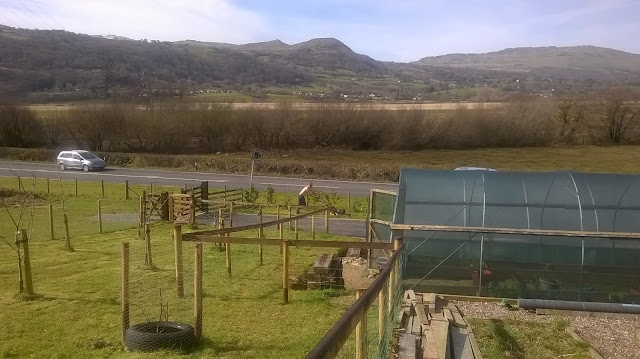 It's a UK Bank Holiday weekend which of course means that sunshine is usually the last thing we see, so when the weatherman said it would be sunny on Friday of the weekend and on no other day we made plans to get lots of jobs done.

Luckily we had a very able-bodied guest staying for a couple of days, my eldest son Simon, and he is always only too happy to muck in a get jobs done, he really earns his keep.  He cut ALL the grass, both in and around the new Chicken Land, which Lovely Hubby was busy finishing the fencing of, and also around the house and driveway too.  When we first got up in the morning the grass was a bit too wet to cut so he washed three cars while the grass dried up a bit.  He had soapy water over from washing the cars so he washed all the windows, frames and sills on the downstairs of the house. 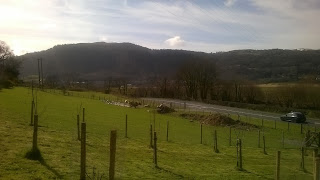 Once he had finished all this he asked what else he could do  ... so he joined in with Lovely Hubby and sieved more top soil from our soil mountain to fill up the last beds of the net tunnel, then they leveled the floor and filled behind the beds with the sifted out stones to make a good weed free drainage area. 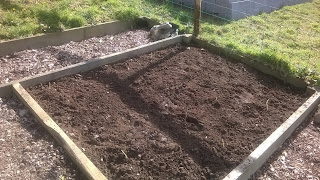 While they were doing all this I managed to get last of the copper tape around the net tunnel beds and watered in the Nematodes to hopefully finally combat our slug problem.  The I uncovered, turned over the soil and planted my chitted potatoes in this and one other bed in the Veggie Patch. 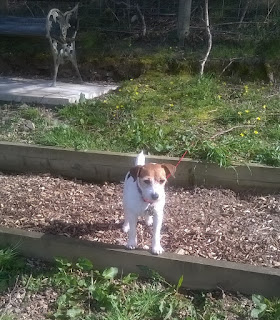 Watched over by a certain little madam, who with the other dogs had a lovely day in the sunshine watching the humans work.

Today just as the weather people forecast it is raining, so after waving off our guest on his travels to visit other family members ... who don't make him work anywhere near as hard as we do ... we are taking it easier and after running a few errands we are sitting down to do a bit of television watching ..... a glass or two of wine may be consumed  ;-)