Sheep .... and The Yorkshire Shepherdess 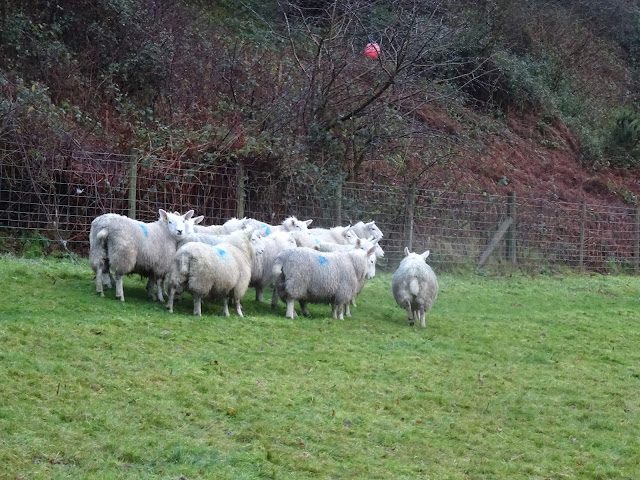 We had fourteen of Will's sheep on our paddock since Christmas, he had had to move them from waterlogged fields and our grass was lush enough, considering the time of year, to give them a good feed for three weeks.

It means they have to get used to the dogs, for this is our field and just because the sheep are in doesn't mean we stop using it.  I'm always careful with the dogs obviously, especially for the first few days, but now they are used to the sheep appearing every few months and have learnt to keep their distance. 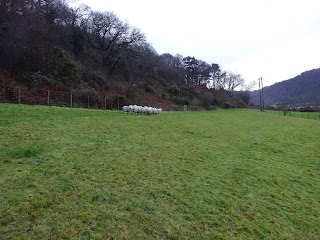 Rosy is made to walk by my side until I know she has sussed out the situation, Mavis is obviously on her extended lead and Suky, well Suky wouldn't harm a fly ... if she's in a field with sheep she wants to be a sheep, if she's in a field with cows she wants to be a cow.  She stands and watches them and copies what they are doing if it's eating grass, she eats grass, if one of them has a wee ... she has a wee, you get the idea ... totally funny to watch.  She gets most upset because they just won't let her join the gang.   She stands with her tail sadly droopy until one of them looks straight at her and then she wags it, as if to say 'I'm a happy doggy look, can I play with you', when they look away or stare her out the tails droops again!! 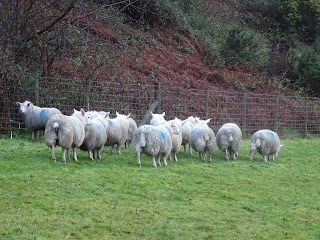 This particular group of sheep are last years lambs and don't have much experience to draw on, so they were determined not to be near us or the dogs.  As we made our way round the paddock they would keep ahead of us and make for the far top corner and stand there as a tightly pressed group until we had passed by.  Once we were making our way back towards the gate only then would they split into their pairs and singles and get back to the business of the day, which with sheep is always just eating the grass.

After three weeks in the paddock the grass was completely grazed right down and then they were moved into our end triangular field, as it's much smaller I doubt they will be here for much longer, there's about a week's grazing in there if they're lucky. 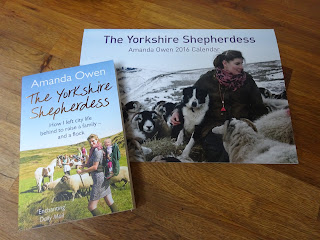 And talking of sheep ... I've just finished reading the book that Lovely Hubby got for Christmas, it's a brilliant read, highly recommended.  I felt a bit guilty reading his present before he did but he's engrossed in a book about a man that makes numerous things out of a single Beech tree .... I don't think I'll be borrowing that one!!