The Last of the Potatoes Harvested 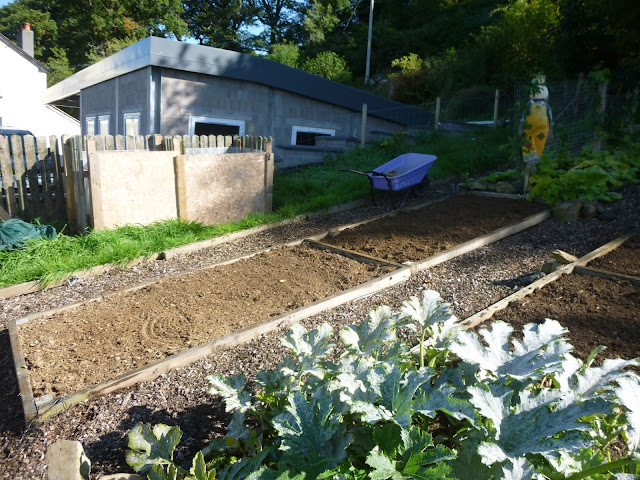 We finally got round to digging up the last of the potatoes at the weekend.  The two of us spent most of Sunday tidying up the veggie patch and the surrounding area.  While Lovely Hubby started off by digging up the potatoes I gradually worked my way round the other beds weeding, pulling up spent plants and turning over the soil. 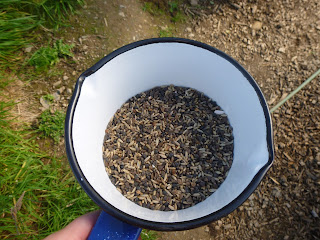 Once this had been done the bare raked soil was fed with 6X which is a nice natural fertiliser that we will use until our own compost is ready for use next year, and then topped with Green Manure seeds, a mixture of Rye and Buckwheat. 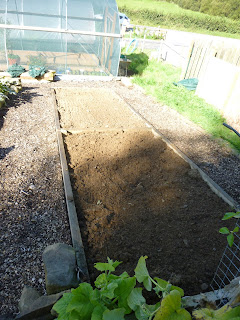 Looking good, if a little bare, in the sunshine. 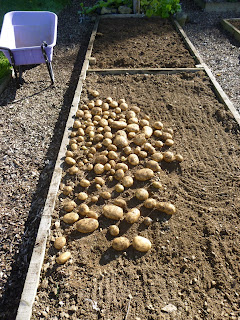 We managed a total of 27lbs (around 12kgs) of potatoes from the top bed, the lower bed had been harvested just before the Trelawnyd and Llanrwst Shows .... it's taken us this long to use up the potatoes.  Looking back on the blog post I did then I have just noted we dug up 5.5kg from the first bed, so leaving them growing longer has definitely boosted the size and weight of the crop. 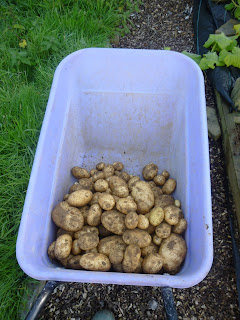 Once they had been drying in the sunshine for a couple of hours they were taken into the house, 20lbs of them were in perfect condition and have been stored in the cupboard under the stairs where it is cool and dark, the other 7lbs most of which are either slightly damaged or have some green patches, will be used first and are in the kitchen cupboard. 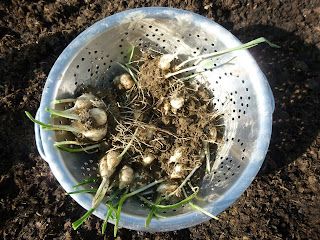 I made a very nice discovery while I was weeding the garlic bed.

Remember way back in the growing season when I lamented that the birds or rabbit had eaten all the greenery off the garlic and I had to pull up what I could before the lot vanished, well although since then we've had lots of rain and damp somehow the planted cloves that remained in the soil had started to sprout.  Now the pesky wildlife have once again been nibbling the tops, so they were all dug up.  I managed to plant 84 single cloves of garlic safe and snug in the net tunnel, we will see how they do over the next few months.

It's just a shame that we didn't wait until after this tidying session to go out and buy next year's garlic!!

I  had just the previous day bought two packs of three heads of garlic for planting.  So one of them has been added alongside the rescued cloves from the hillside as a comparison crop and I will try and find space for the some of  others in the polytunnel to see how it compares.  A couple of heads will be planted on the hillside with a net cloche to complete the comparison.

Hopefully we will have more garlic than we know what to do with by this time next year.  There will be no vampires on this hillside for sure!!