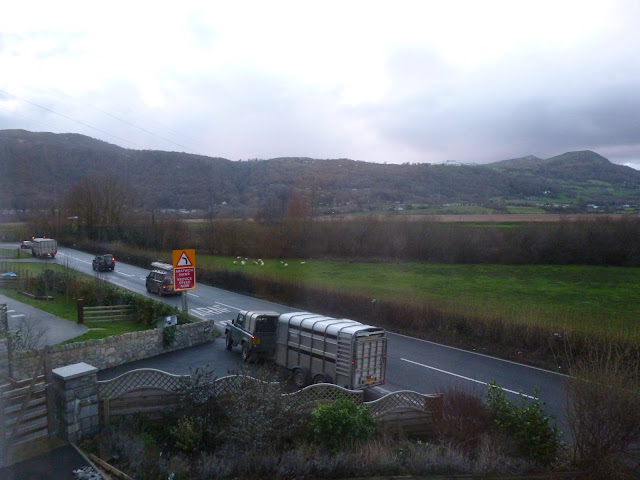 Yesterday was a busy day from the start ... and not in a good way.

The day started with Alan going to down to make us a cup of coffee, only to find copious mounds,  splats and puddles of doggy sick.  Christmas presents strewn all over the conservatory ... and the cause of the sickness epidemic ... missing chocolate Santa's bought for the grandchildren!!

So the washer was put straight into service washing dog bed liners and towels, two very guilty looking pooches didn't know where to put themselves and Ginger the cat ... who is the only one who could possibly have knocked the bag over containing the presents ... was his usual 'I'm a good boy aren't I ' self.

Much cleaning, present wrapping and little jobs later we were suddenly distracted by the sight of five sheep running past the conservatory doors, then tucking into our laurel bushes near the shed.  We pulled on our wellies and then spent an hour herding the very energetic sheep this way and that until we managed to get them contained in the paddock.

They had wandered in through our open gates as we were expecting Will the farmer with his gift for Alan .... half a sheep!! 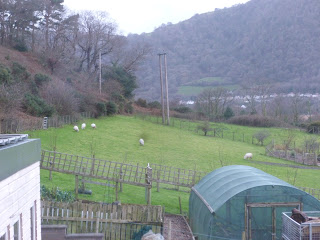 We thought they were Thomas' sheep, the farmer that owns the field opposite so we gave him a ring, he turned up half an hour later with a trailer to collect them.  As it happened they weren't his sheep at all,  the sheep I thought were missing from his field had just been hiding in the trees there.  Will, showed up while Thomas and his brother were chatting to Alan, so three Welsh farmers and a Scottish engineer had a bloody good laugh about things and set the world to rights.

Thomas' trailer being there though turned out very useful, as we had our old sofa in the conservatory that we have been trying to find a good home for ... and he has a bunkhouse that needed some seating, so it was loaded up but not in the way we had originally expected.  While the guys were chatting two of the sheep leapt out of our paddock over the fence and had to be chased back in ... not good.  We made good the escape route and hoped for the best.

This morning we were awoken by the sound of Mavis barking, so Alan rushed downstairs only to find the sheep once again passing by the conservatory.  In his dressing gown and wellies he managed to get them round the house but they made for a gap in the hedge and out on to the main road.  He could have herded them back in if it wasn't for a very mean spirited motorist who refused to stop his car, and spooked them into running off up the main road.

So the sheep have gone, hopefully for good.  They are no doubt at this very minute munching on someone else's garden, and for those of you who follow our frequent sheep exploits they are owned by the same farmer who's sheep (including Ethel) are routinely found roaming the area in search of their own grazing.

And just a footnote, the dogs are both fine after their consumption of a chocolate Santa  each, if there hadn't been so much sick everywhere we would have taken them to the vets, chocolate is very poisonous to dogs, they don't realise how lucky they are!!