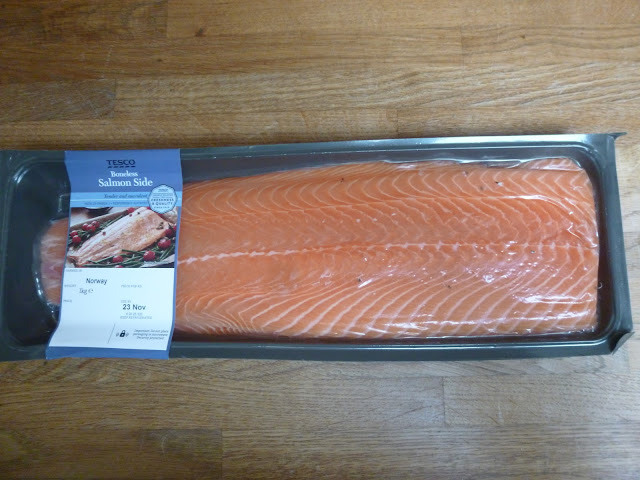 Last Friday I posted all about our Musclefood delivery and the meat that we bought to stock the freezer for Alan's meals (see here) ...  this week's bulk purchase for the freezer is fish.

In Tesco one day last week I noticed the end of one of the chiller cabinets was absolutely full of sides of salmon at the reduced price of £7.50, instead of the normal £15.  After checking all the other fresh salmon prices I bought two.  In the cinema half an hour later I thought about this and decided to nip back to get two more thinking that they would last us a long time at this brilliant price.  By the time my film had finished and I had driven the three minutes back to Tesco the fridge had been stripped bare ... as had lots of other shelves, it seems the Christmas buying frenzy is already upon us.

But never mind I had my two safely in the boot of the car  :-) 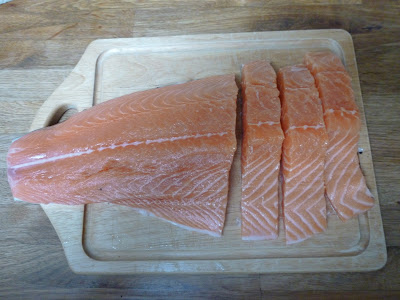 They have now been sliced into meal sized portions. 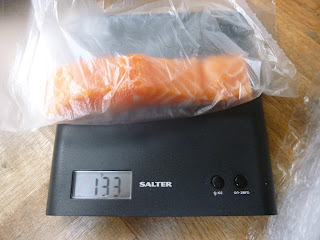 Although a couple were slightly over the recommended 100g of meat or fish allowance for a meal. 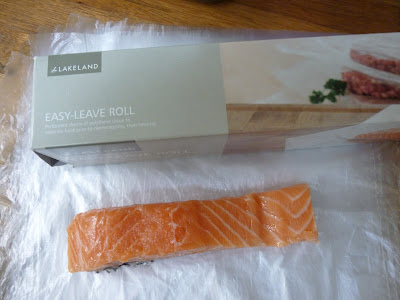 Each portion was wrapped in Easy-leave, so it would be safe in the freezer and separate from the pieces next to it. 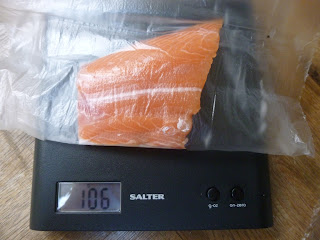 I just weighed every now and then to keep me on track, especially as the fish changed shape towards the tail end. 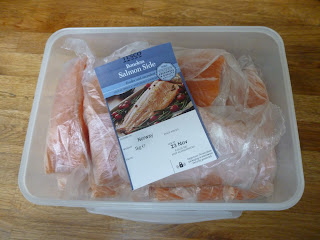 Once both sides had been portioned out and wrapped I put them into a freezer proof box and added the label off one of the packs. 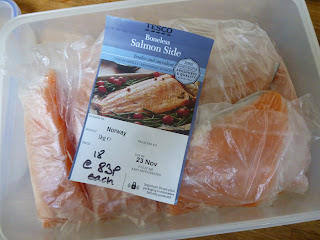 Then I decided to write on the label how many portions I had started with and the cost per portion, because as much as I think I'm going to remember I never do.

A Tesco single plain salmon fillet is currently on sale at £2.35 for 130g.  So I think my portions at just 83p each are an absolute bargain, and with 18 slices now nestled in the freezer Alan will have a fish dish every now and then at a much lower cost than usual.