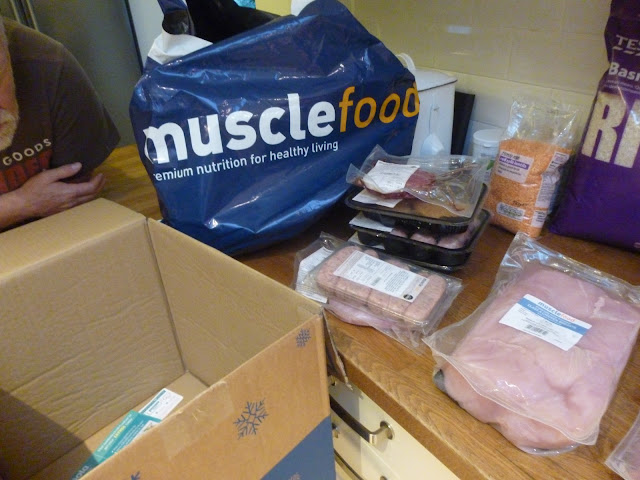 This week for the first time ever I ordered from Musclefood.  My son has used them a couple of times but I had always resisted temptation.  But now with not a lot of meat left in the freezer for my lovely hubby I decided to stock up in time for Christmas with the idea that this would form the major part of his Christmas dinner and keep him well supplied into the New Year. 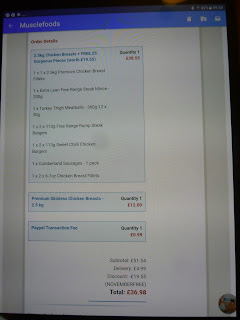 I chose an offer that I picked up off a Facebook frugal foods page, which gave me 2.5kg of chicken breasts, with a 'hamper' of various mixed meats that were worth £19.55 but which were the 'free' offer, and then another 2.5 kg of chicken for £12. 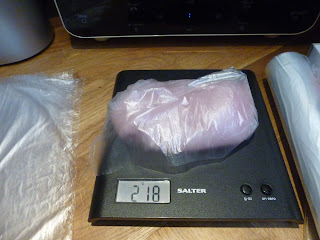 It was delivered on time by courier in a chilled box yesterday and after it spent a night in the workshop, which is as cold as a fridge overnight, we set to this morning to get it all ready for the freezer.

I was surprised at the size of the chicken breasts, so I got out the scales and weighed them.  Not bad at all, they were well over 200g each.  Which means that following NHS guidelines there is more than enough in each one for two adults to have as part of a meal. 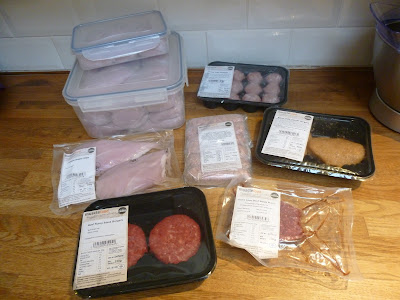 With Alan doing all the meat handling and me doing the wrapping it was all portioned out and ready for the freezer in no time.  The chicken breasts were wrapped individually and then put into boxes to avoid freezer burn, the sausages were snipped apart and wrapped with a layer of EasyLeave between but everything else was just checked for a level of separation and then popped into the freezer as  they were. 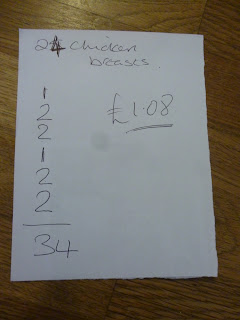 I was wondering how to work out the costings for each item at first, then Alan suggested to simply count the portions we would use for a meal.

So a grand total of 34 meals, which if I divide that by the total amount the order cost me to have sent (including delivery), would make the meat part of each meal £1.08.

But after seeing the size of the breasts we now think that most of them will be used for two meals if it's something like curry, casserole, stew etc.  If they are to be the 'star' of the show, sliced meat for sandwiches, a large roast dinner etc, then they might be used for just one meal.  So counting three quarters of them as two meals, and using the mince for two instead of our original thought of one meal (it's very tightly packed, not loose like you get from a supermarket or the butcher, so seemed small, but after checking the weight it does weigh in at over 200g), we now have a working total of 55 meals.

Which brings our cost for the meat part of any meal down to 67p.

I know it's not very often that you get a 'meaty post' from me, but living with a meat eater is my life and something I can't change, so it means that we just make the best of things, and one of the things I am good at is saving money with food .... but I am glad I had Alan to help with the handling of all this well packed meat, otherwise I think a thick pair of rubber gloves would have been called into play   :-)

If you would like to have a look at the Musclefood site for yourself and see all the bargains there you can use this link to get you there:   MUSCLEFOOD

If you do decide to buy anything while you're there use my referral code ... which is SH731226 ... and you will get an extra freebie that can be chosen from one of four items ... and being totally honest I will get a 500 point referral fee.  I have also added a link to the sidebar for while so you don't have to keep coming back and finding this post.  Just click on that and you will have access to the site and my code.

Have you used this site before, what did you think of it?

We were very pleasantly surprised and wondered why we hadn't taken the plunge before.  One thing for sure is that we will be ordering again in a few months when the 55 meals have been eaten and there is some more space in the freezer.