A Successful Day at a Very Wet Show 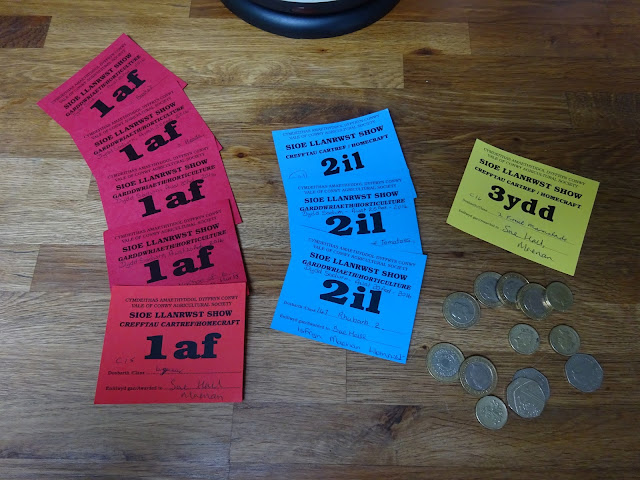 I'm happy, happy, happy ..... we had a really successful day at the Llanrwst Show yesterday.

As you can see from the photo I came away with five firsts, three seconds and a third, they gave out two thirds in the Two Fruit Marmalade section as there were such a lot of good entries, so I was extremely pleased to be one of the winners. 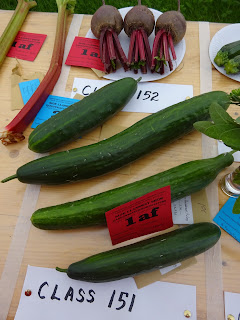 My cucumber got a second place. 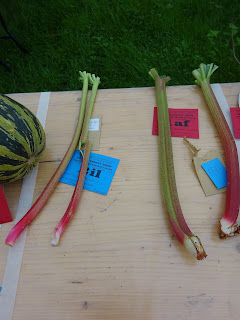 As did my rhubarb. 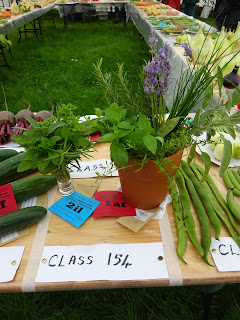 My pot of 'Six Cut Herbs' got a first. 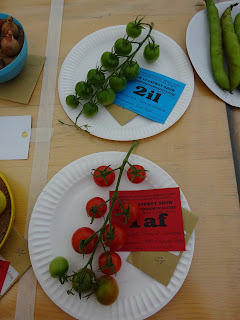 And my pathetic unripened green truss of tomatoes got a second.  None of my tomatoes are red yet, well except for the little Tumbling Toms and they don't have trusses as such. 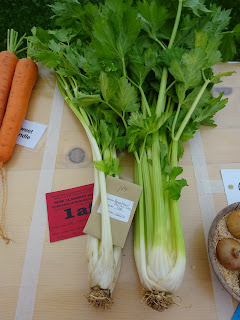 My '2 bunches of Celery' got a First.

The one on the right which was pretty damn perfect and came about as a unusual result of my celery experimentation, which I'll tell you about another day, was obviously the one that swung it ... well that and me being the only entry in that section!! 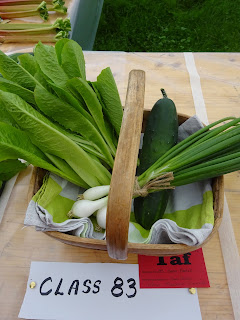 My 'Lettuce and 2 other Salad Ingredients also got a First. 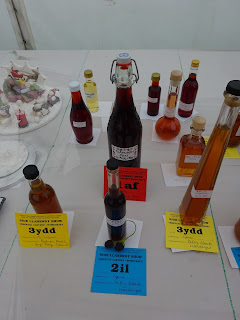 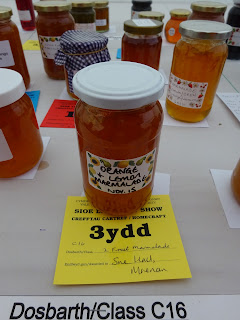 The third placed Marmalade.
That's two wins in almost as many weeks for my marmalade ... I must be doing something right. 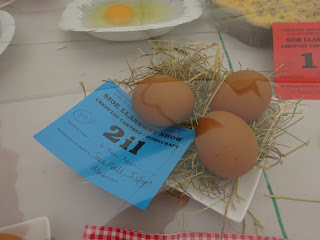 Our eggs got a second place in a category that had lots of entries.

A big thank you should go out to our newest girls the Calder Rangers who lay such consistently good and very matching eggs.  And I had the inspiration to line our little plate with some hay, everyone else had used wood chippings, it made our eggs look even better being in their own little nest :-)

So we had a very good day at a very wet show, as unfortunately the weather gods did not smile favourably on the show at all yesterday, it had rained very hard all night long the night before, and this and the high winds continued throughout the whole day.  It meant that lots of the outdoor classes were cancelled, exhibitors either didn't show up or took their animals straight back home.  The fairground couldn't run and the only tent other than the poultry and horticulture tents that saw any real crowds was the beer tent.  I should imagine the show has lost an awful lot of money this year and to rub their faces in it even more today the sun is shining and the weather has improved in every way.

Still there was a good atmosphere in the 'Horticulture and Homecraft' tent and I really enjoyed entering again, ... and of course it means we have lots of already harvested and washed food to eat over the next couple of days.