What a Difference a Month Makes 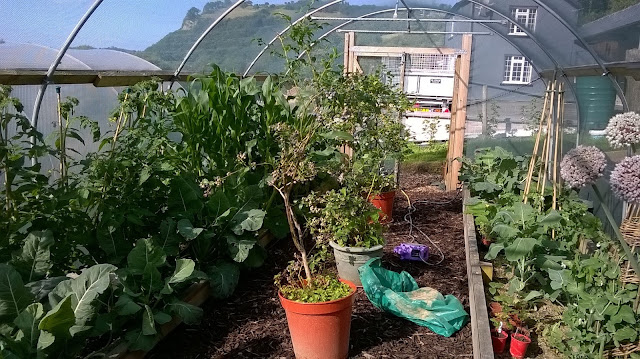 What a difference a month makes at this time of year.  Using the net tunnel photo that I already had for yesterdays post, I realised just how different it looks now just under a month later.  So this morning I went out with my phone in my pocket and took a couple more photos for comparison.

I think the main difference is in the Sweetcorn and the Tomato plants, but the Purple Sprouting Broccoli and the cabbages have put on some pretty impressive growth too. 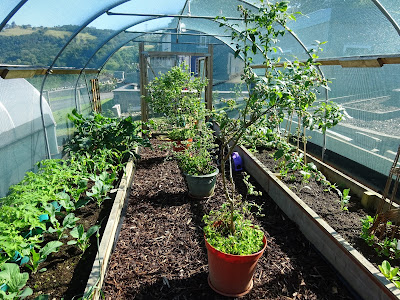 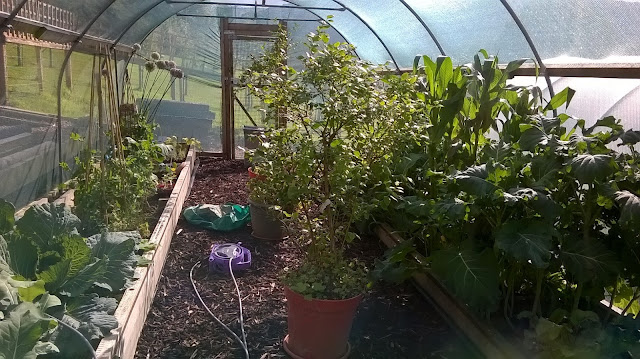 This is how it looks taken from the other end.

The Blueberries are still cropping profusely and I have an enormous tub of picked berries in the freezer ready for use.

There are now two beds empty in the net tunnel with the onions and the garlic all having been harvested and strung,  so I'm about to start off some crops for Winter.  A few Mooli radishes for sure and perhaps a few more Cauliflowers, I feel a mooch through the seed drawer coming on.

It's nice working in the net tunnel and I enjoy being in there, I can watch what the dogs are up to as they tend to stay nearby when they see me in the tunnel, funnily enough they don't like it in there at all,  because of the close weave of the net the edge is taken off the wind when it blows a hooley, and the heat of the sun when it's out in all it's full force is subdued slightly, the only thing it's no defence from is the rain ... but then that also means that I don't have to water so much.

We were sat having a break on the bench at the top of the Veggie Patch one day over the weekend and we both agreed that if we knew then what we know now about growing here, we would probably have put in two net tunnels to grow in, as well as the polytunnel, and just have a smaller outside area of raised beds.

Oh well maybe it's an idea for the future.