The Most Unexpected Visitor 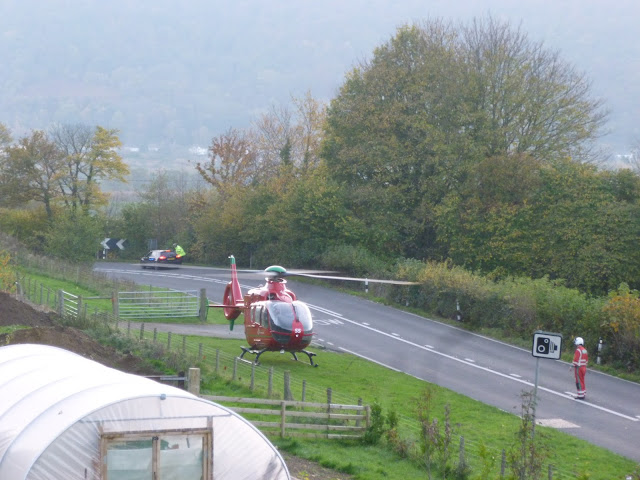 Yesterday we had the most unexpected visitor, although with the speeds people reach on this winding and dangerous road it shouldn't have been that unexpected I guess  :-( 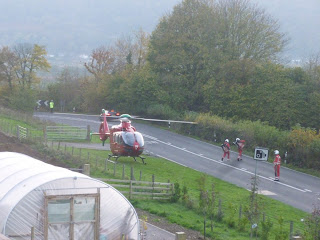 I was upstairs in the office, which is on the road side of the house, Lovely Hubby was downstairs relaxing watching a game of rugby when the sound of the helicopter drowned out everything else and sent the dogs into a frenzy of barking.  It whizzed closely by the window and then settled briefly in the field opposite while the first man jumped out.  It lifted back up immediately as the field is really much too boggy to land in and then when a car that was parked in our top gateway moved out of the way it turned and landed on the grass verge by our fence.

The police were quickly on the scene and had been able to stop the traffic on either side of the road traffic accident, and luckily for everyone trapped between Tal-y-Cafn and us, our new widened driveway proved the perfect place to turn round and head back towards the detour.

We made an offer of help if any was needed, and then left the emergency services to get on with what they do best. 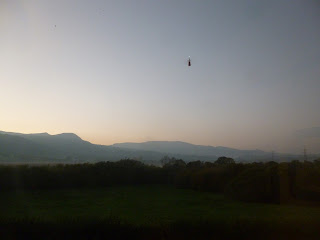 The road was closed for hours, then with darkness just about falling suddenly the helicopter was back in the sky and heading across the hills in the direction of Bangor Hospital.

I watched it until there was nothing left to be seen, saying a silent prayer for the occupants.

The road stayed closed but with the helicopter now gone we fed the dogs and walked them around the paddock and then we all settled down for the evening.  It was deathly quiet outside the now curtained windows, no traffic noise, no sounds at all until much later on when the flashing blue lights of an emergency vehicle and then the orange flashing lights of recovery vehicles lit up the living room and suddenly the road was back in action as though nothing had happened.

This road has claimed too many lives through accidents caused by unfamiliarity and excessive speeding .....  I hope there is not one more to add to the list.

Updated to add link to information about the accident -
http://www.dailypost.co.uk/news/north-wales-news/elderly-woman-cut-free-overturned-10369628