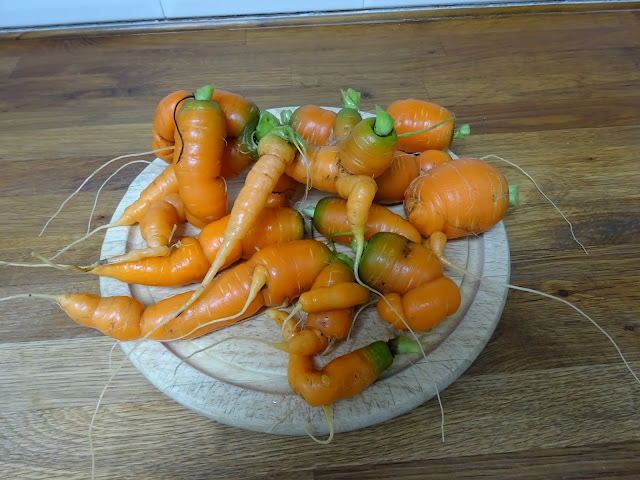 The weekend weather forecast made me rethink what I was going to do today and instead I went into the polytunnel to pull up, well cut off an inch above the soil, some of the celery.  If we do get the promised frost I want to be sure that I am at least in the process of using up the things that could be frost damaged, and the celery is on the edge of the polytunnel and so could possibly be affected.

I cut off two of the big bunches, and realising what was on my mind to do with it I pulled up some carrots to go with the celery.  What I got was the fabulously shaped carrots you see in the photo above.  Each one I pulled up had grown in it's own weird and wonderful way. 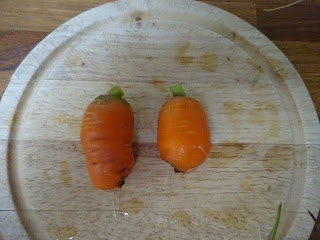 The carrots I was supposed to plant in this bed were short and stubby like these two, but obviously I had transplanted some that were meant to be long and narrow into the same shallow bed .... ooops!! 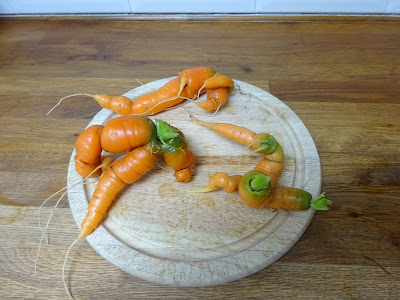 In their efforts to grow they had taken off in every direction,  I must say I felt guilty ... like a Mum who has left her child in shoes a size or two too small.  The poor things, determined to grow they had gone this way and that and even joined forces to grow in the small space allowed them. 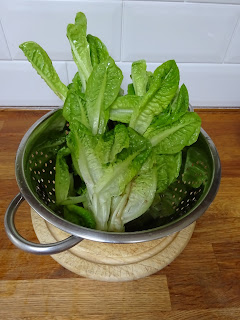 ... and two bolted lettuces just go to show that I don't always harvest on time either!!

Still I know exactly what I will be doing with the celery, carrots and the lettuces so nothing will be going to waste.  After all, wonky ugly veg and bolted lettuces are still food and homegrown food no matter what it's shape or persuasion is always tasty and nutritious.