One Saving and Three Treats 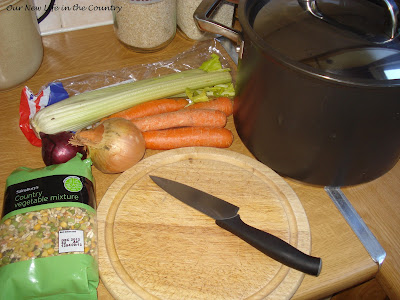 We are starting to scrape the bottom of the fresh foods 'barrel' now and I'm using up whatever I find lurking in the salad drawers of the fridge.  On Friday morning some of the tiredest carrots, the limp centre of the oldest bunch of celery along with a couple of onions and a whole bag of 'Country Vegetable Mixture' (25p from Approved Foods) along with some tomato puree, the last of the Veggie Stock Pots and a couple of pints of water all went into my large stock pot and made us a wonderful pot of Vegetable Soup.  I worked out, rounding figures up in every case, that it cost me just one pound to make.  So that's ten good portions of lovely homemade vegetable soup for just 10p each.  A bargain .... we have eaten two portions each and there are three more two portion packs in the freezer (and yes, I remembered to add it to my freezer inventory). 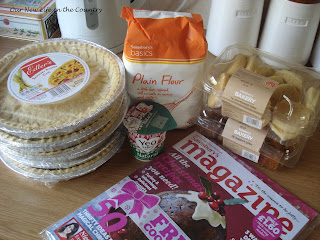 So that was a 'saving', lovely soup for pennies a portion and this photo shows my only shopping for last week including a couple of 'treats'.
I bought plain flour, because I had run out completely, a single yogurt to act as a starter for some homemade yogurt tomorrow, two packs of biscuits for just £2.50 to take with us when we went up the motorway to Manchester on Saturday, the first treat (you can pay that per biscuit at Costa Coffee).  So it works out much cheaper than buying biscuits or cakes to go with our Lattes when we stop for a break, yes, before you jump in, we do buy Lattes sometimes when we are travelling, we both absolutely love them and no matter how frugal we get in some areas, a treat of just what you fancy does you the world of good now and then.  Something we both agree on.
The second 'treat' was some ready made Quiche bases, I know I could have made them sooooo much cheaper, especially using the flour I'd bought, but we like to have a ready meal lurking in the cupboard for emergencies and if I have a little stack of these tucked in the cupboard I can take a couple of our own hens eggs and a handful of cheese or leftovers and we have a healthy meal in around 30 minutes anytime we don't feel like really cooking.  As they cost just 65p each I can make up a quiche for around a pound, which gives us three portions, one each for an evening meal and then usually one for Lovely Hubby to take to work the next day for his lunch.  So although I see it as a bit of an extravagance in reality it is still a real money saver, especially if you look at the cost of a fully made bought quiche, which would not have the same quality ingredients that one of our homemade ones has.
﻿ 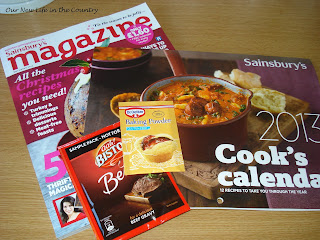 The final treat was the Christmas edition of the Sainsb**ys Magazine.  Bought because traditionally I always used to buy lots of Christmas magazines, but last year I decided to knock this little extravagance on the head and now I just buy one.  This one came with a free Calender, so already a saving as we use two calenders in the kitchen, one on the wall for reminders of general things (bins, cat and dog flea treatments, appointments etc) and one for dating our egg boxes each day which lives with the boxes and stickers ready for use.  (We will get our other calender free as well hopefully, as we usually get given one at the Farm Supply shop when we pick up chicken food in December.)

This magazine turned out to be excellent value as lurking inside were a sample pack of Bisto and also a sachet of Baking Powder.  There was also a 50p coupon off something, I forget what it was, as it was something we do like, but not something we needed, so I threw it away before temptation took over!!


Now I'm off to make up the meal plan for this week, I think I'll do it sat at the kitchen table as the kitchen is a lovely toasty, aromatic place at the moment as there is a tray of Chocolate Muffins cooking alongside the Mediterranean Veggies for tea and you can't beat a warm kitchen complete with yummy cooking smells on a cold November evening. 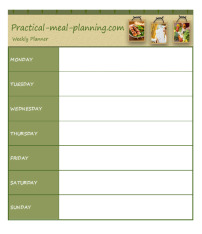 What do you see as extravagances but enjoy having anyway?