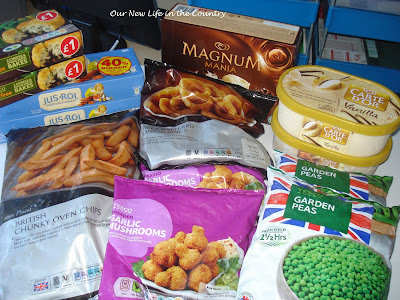 Yesterday was spent shopping without money, I decided that the time had come to make good use of my points and vouchers gathered over the last few months and give my purse (poor empty thing that it is this month) a well earned rest.
I had £15.50 of T*sco vouchers, so on arrival at the dreaded palace of consumerism I traded £10 of them in for Frozen Food Vouchers which instantly gave me double the spending power, and which left me with £5.50 for 'normal' groceries.  I did my old trick of walking round with a running calculator in my head, totalling up everything that I put in my trolley, when my boys were young Simon would follow me round with an actual calculator to keep me on track, it was good for his maths and good for him to learn the value of foods and how to save money.
Every shopping trip was a good family time and no, my children did not beg for sweets and goodies over and over again as we went round the shops.  If I had any money over after the necessary foodstuffs were added to the trolley they would be allowed to choose something and they appreciated it all the more.  No they weren't angels and sometimes they had a little whinge and a moan but the thought of going to bed without a couple of bourbon or custard cream biscuits for their supper was enough to stop any begging for the sweets which would eat up the 77p needed for a pack of each, (T*sco Value Bourbons were 44p for a family pack and Custard Creams 33p for a family pack) that if rationed out lasted us all week, my how that has stuck in my memory, a purchase I tried to make every week!! 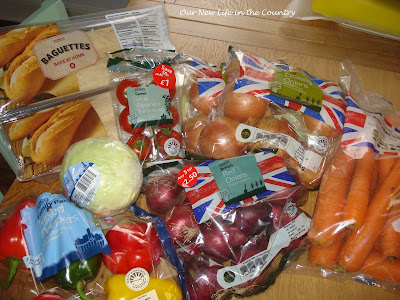 Anyway yesterday I manged to get a good mix of needed foodstuffs and some treats as well.  I spent a total of £23.98 on frozen foods and £7.96 on fresh veggies and a pack of part baked baguettes.
So cash spent at T*sco = £6.44 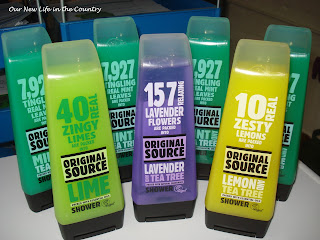 Then it was off to Boots the Chemist to trade in my remaining points on my card, I had £7.25 to spend in store and was not sure what i would be able to buy.  But look what was on special offer these brilliant Shower Gels that Lovely Hubby likes, nay loves.  They are usually £2.30 in Boots and they were on sale at just one pound each so all my points went on seven bottles of shower gel.  So something that would normally have cost me £16.10 from there cost me nothing.  (I don't buy these unless they are on a good offer and recently have only been using supermarkets own versions which are much cheaper.)
Cash spent at Boots = 0 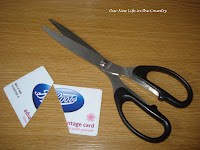 When I got home I cut my card up and chucked it in the bin.  I am working my way through everything we have and do, in a bid to really simplify our lives and this is one card that I didn't want anymore.  So one less bit of plastic in my purse. 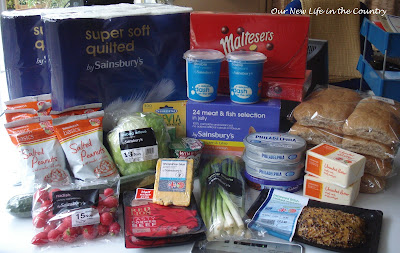 Next on the list a trip to visit Mr Sainsb*rys to use up my stash of Nectar points.  I had £40 worth of points for spending.  I bought a couple of treats, Maltesers for Christmas was one of them but mostly just things that we needed.
So actual cash spent at Sainsb*rys - £7.83
So this weeks total spend on foodstuffs and some treats for Christmas is just £14.27.
My cupboards are all looking healthy and we have lots of fresh and frozen things (including a few Christmas treats) in store.  So hopefully this weeks spending is over and done with.
I am in the process of organising next years main Challenge, which is all about us being so super careful with our pennies, so this style of shopping will happen whenever I have enough points and vouchers to allow it.
Off now to photograph this weeks goodies to go on Ebay, I have six up to now so will have to have a look for four more to keep on target with my 'selling 10 things a week mini challenge'.  Check out my Ebay page later and see what goodies I have decided on.
Sue xx