Half a Slice of Steak = 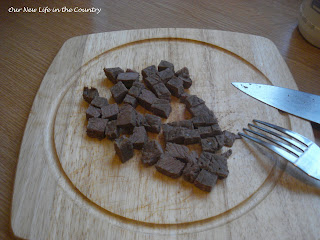 Half a slice of steak doesn't make much - does it?
Well if you think how you can pad it out it can go a long, long way.
Lovely Hubby had steak on Monday night for his tea, he does like his meat that man of mine.  When I opened the pack there were two slices of steak, a really good man sized portion, but as I had cooked lots of lovely vegetables and tasty gravy there was really no need to use all of the steak for one meal so I surreptitiously cut one of the slices in half, once cooled it was popped into the fridge ready for the next day, when I had more time to turn it into something else. 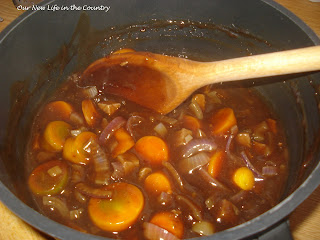 Added to an onion, a couple of sliced carrots from the freezer and a good portion of Bist* it looked a lot more like a filling meal, indeed at this stage I could have added a couple of potatoes and it would have been a lovely stew, but that would only have given me one or two meals at the most out of my half slice of steak and I wanted more, much more. 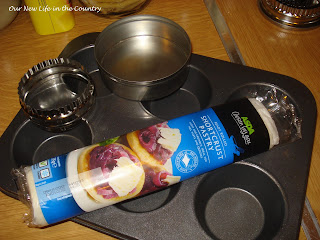 Thawing out a pack of the pastry that has lurked in the freezer for I don't know how long and I was in action, I quickly made up three Steak and Veg pies and two Cheese and Onion pies for me (I don't eat meat), and still there was more filling for both type of pies.
We had pies and veggies for tea on Tuesday night (I had one, LH was very hungry and had two) with some more Bist* poured over (Bist* gravy although tasting very 'beefy' is in fact vegetarian!).  So that left two pies to be popped into the freezer for another nights tea.
And still there was more pie filling over for both types, so I got another pack of pastry out of the freezer to thaw out overnight. 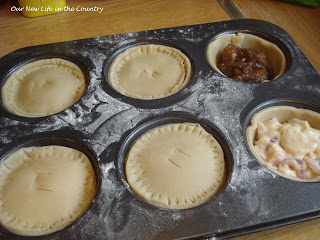 Yesterday I made up yet another batch of pies, three each of Steak and Veg and Cheese and Onion.  So that's four pies of each kind now nestling in the freezer.  As I was baking a loaf of bread these were cooked at the same time so will only require reheating when we fancy them for a meal.
So out of two slices of steak that I got on offer (yellow sticker) for £3.40 I managed to get a total of six meals, LH will only be getting one pie each time and more veggies for the next meals, he did admit to being very full after eating two!!
In the past I have also done this with sausages when there have only been two left, making a pie with chopped up sausages and beans instead of steak and veg, you could also make good use of a solitary burger or a single pork chop.  It's amazing how far you can make a small amount of food go if you wrap it in pastry. 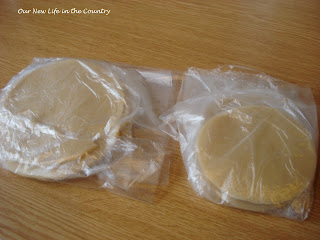 I also ended up with some pastry over so I made two more pie bottoms and tops and popped them back in the freezer, naughty I know it does tell you not to refreeze once defrosted but I have successfully done this before and it tasted just as good once cooked.
*** *** ***
Some of you asked questions about the last post (see HERE), mostly to do with how I freeze my potatoes and veggies.
Well it's quite simple I just pop them in the freezer!!  When I first started out on this self sufficient lifestyle I used to religiously blanch every vegetable for the required time, cooling them quickly and then getting them as dry as possible before open freezing them and then bagging them up.  Then I did a little experiment one day when I was feeling very busy lazy, and I simply popped them straight into tubs and into the freezer.  I did remember to give them all a little shake after an hour or so, so that they wouldn't stick together in one huge mass.  And guess what - IT WORKED.  There was very little difference in the properly prepared veggies and the simple 'bung them in the freezer' option veggies.
So now usually I go down the simple route.  If I have my own veggies or nice fresh shop bought veggies I will have one prep session, rather than starting from scratch for every meal.  So for instance a bag of potatoes will be used on the first night I have them for whatever meal I have planned  and then the rest will be divided up into groups.  Some will go in the freezer in Stew Packs like in yesterdays post, some will be cut into wedges (with the skin left on), some will be sliced thinly to use as a layer on a pie etc and a couple of the biggest ones will be put back in the cupboard to be used as jacket potatoes.  Of course if I am doing jacket potatoes (or baked potatoes as some call them) I usually do a couple extra and then these are popped into the freezer as 'filled jackets' (simply scrape out the potato with a spoon mix it with some cheese and a bit of onion and a dash of Worcestershire sauce then pile it back into the potato skin and open freeze until frozen solid then double wrap and keep them in the freezer ready for a quick supper).
You can do the same with lots of veggies, carrots, cabbage etc, why leave things lurking in the cupboard or fridge waiting to be used and leeching out their vitamins and nutrients as they age, when you can snap into action and freeze them at their freshest.  You don't have to grow your own to eat the freshest food, just buy the best you can find and use them all up straight away.  It's a good way to make use of any bargains you might get especially the 'Buy One Get One Free' that so often happens on fruits and veggies when supermarkets have vast quantities to get rid of in a rush.  Doing this can even work out cheaper than buying pre-prepared frozen veggies.
I have a big chest freezer with a fast freeze option so if you have a different style of freezer or have never done this before I would recommend just trying it with a couple of portions to see if it works for you with your freezer.  But I can honestly say I have never had a failure (yet!!).
Thank you for all the lovely meal ideas for the Stew Mixes, there are a couple that I really fancy, but I am going to let Lovely Hubby choose his favourite and as my next post will be my 1000th I will let you know which he chooses and how it tasted with the recipe I used.  The commenter that gave us the idea will be getting a little gift to say thank you. So I will be asking for the address of the sender at the end of that post.
We are now going away for a couple of days, calling in on family in Preston, Peebles and Manchester over the course of a long weekend and also having a day at the Country Living Fair in Glasgow on Saturday as our Christmas treat to ourselves, so I will be back next week with that 1000th post.  To those of you who have read from the start (or the few of you that have just read it all from the start up to the present day) WELL DONE, I do appreciate you all being there and reading the wild and wacky ramblings of this townie turned country girl.
To those burglars out there who are reading this the house will not be empty!!  We are leaving it in very capable two legged and four legged hands.....if you know what I mean....lol!!
Sue xx
Posted by Sue at 09:30