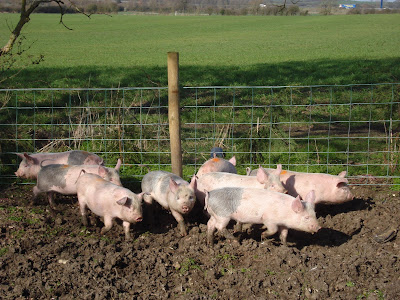 ~
Well our mission was almost accomplished yesterday. While I weeded and dug over the first of the three Kitchen Garden beds Lovely Hubby set to cleaning out ALL the arks, not easy job, we have eight!!
~ 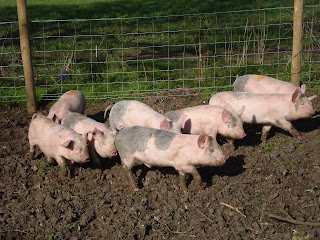 ~
Once the clean up was done it was time to start Piggy Musical Pens.......Liz gave us a merry dance as she was very slowly enticed round to the Paddock to join Lulu and Lottie, stopping many times to sample luscious mouthful of grasses and weeds en route and doubling back at every opportunity.
~
Maud and Martha happily trotted after LH from the barn to the Paddock showing all the others how it should be done.
~ 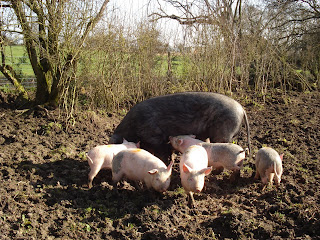 ~ The 'babies' (Maud's piglets) spotted Jack being let out of his pen and decided they wanted to play with Daddy. ~ 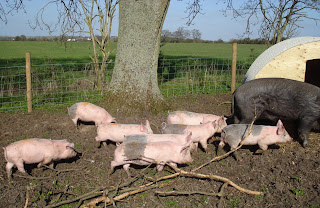 ~ So as he wandered around exploring the Orchard he had a little band of followers everywhere he went. ~ 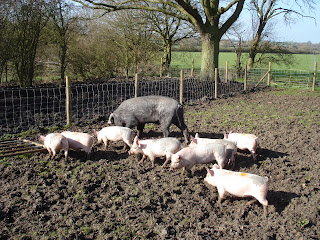 ~ He just couldn't shake them off, but he took it all very good naturedly and let them mooch about with him in the warm March sunshine for an hour or so, then spotting LH with the feed bucket he decided he would make a break for it towards his new larger pen. ~ 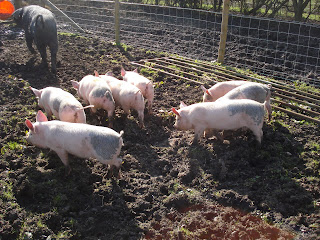 ~
Leaving a trail of little piggies who then refused point blank to go into their new pen (Daddy's old one), the reason....very muddy mud......they were not going to get their little trotters dirty for anyone. So last night they slept in the ark that is situated in the main part of the Orchard, this morning after I laid a carpet of straw to their new pen, hunger and a slightly clearer path made them decide that maybe after all the new quarters were suitable for baby piggy habitation! ~
So the only pig left to move is Lulu, who will be moving in with Jack on Thursday (hopefully). It's no bad thing though as he will have made his new pen into his very own batchelor pad by then and be ready to accept lady callers.
~ 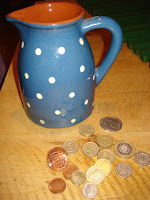 The Challenge
~
This week Spotty jug has accepted a donation of £38.74 after a very reasonable weeks shopping, with a spend of only £31.26. Only milk, fresh fruit and veg were bought along with the new water filter jug. The cupboards are at last starting to empty visibly and the stock of food in the freezer is going down nicely. There is still lots to choose from though and this Challenge looks set to go on for quite a while.
~
When we do run out of necessities we are trying some of the basic ranges and supermarkets own brands to keep costs down, up to now the only thing that has been given the thumbs down to is cheap toilet rolls, it's definitely a false economy when you have to use twice as much of something to save half the price you normally pay.... you may as well buy your favourite one and use it sensibly.
~
Sue xx
Posted by Sue at 08:47