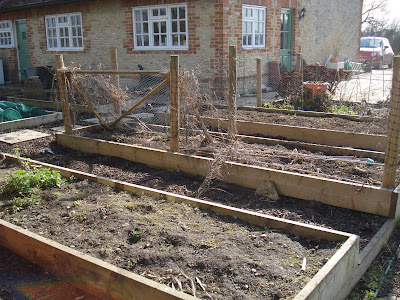 Most definitely - before. ~
White Lovely Hubby was doing the mucking out of all the pig arks on Sunday I concentrated on getting the first of the Kitchen Garden raised beds weeded and turned over.
~ 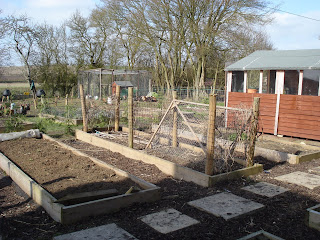 Still before - the beans that had dried on the netting provided me with lots of seeds for planting this year.
~
The chickens had spent the week rooting around eating the bugs (and I hope not too many of my worms), and clearing the surface weeds, but the deeper rooted ones needed pulling up and disposing of.
~ 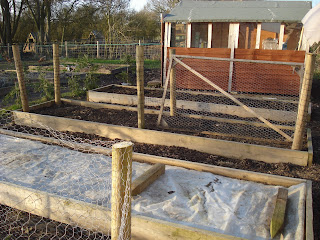 It can be a boring job, but when it's broken up by helping to relocate pigs to different pens and putting errant chickens back over their fence to keep them safe from Mr Fox, the time goes by very quickly and when you step back and see the outcome of your labours it's all worthwhile. ~ 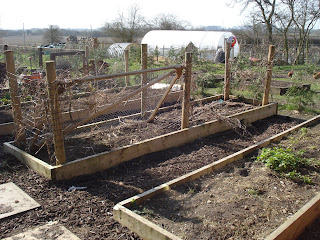 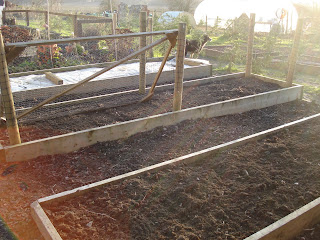 After.
~
The framework you can see in the picture is my Cucumber Slant. The plants curl their way up and this leaves the cucumbers held off the soil, which stops bugs from eating them and because they're not resting on the ground they don't rot, also the sun can get at them better. I pinched this idea from Alys Fowler last year and it worked a treat. Of course LH's version of the frame was a super duper one!! ~
Thank goodness I didn't get carried away and plant anything though as we have had two very hard frosts over the last two nights and they would have been a goner!! I've now covered both the two end beds with thick polythene to help warm up the soil. Hopefully in a couple of weeks the plants from the polytunnel can be planted outside and then we are on our way to eating our own again.
~
Ah well, that's three beds done, only another eleven to go......I'm going to be busy over the next few days!!
~
Sue xx
Posted by Sue at 07:03