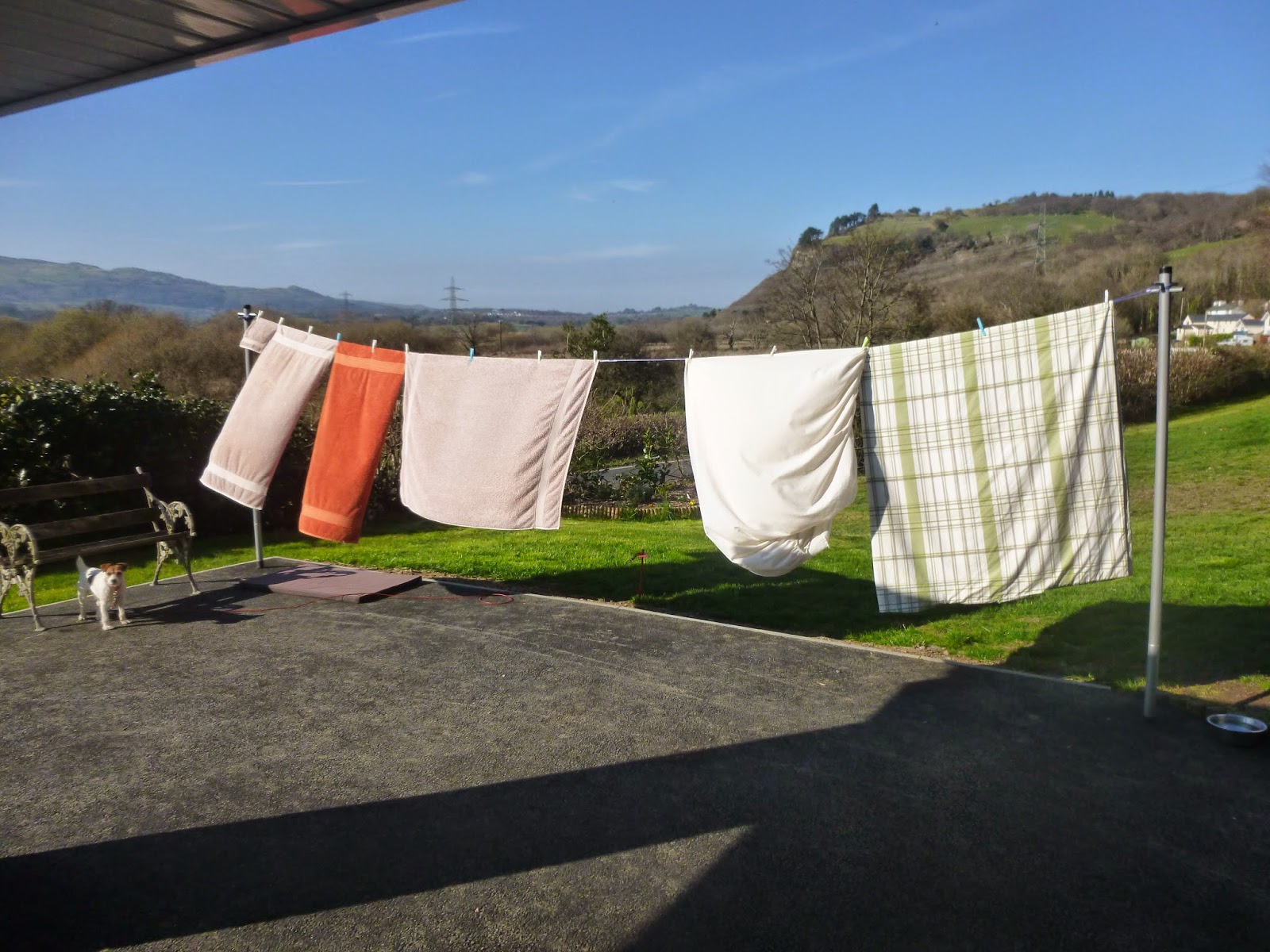 I had a couple of comments about Ginger joining in on our the twice daily doggy walks around the paddock the other day, and then an email asking if there were any more pictures of this .... so here you are, a whole post about that nights walk.  There were more pictures :-)

First I step out of the conservatory door and gather together the troops,  Mavis was sat in the sunshine on the mat, but seems to be stood waiting under the bench now ... 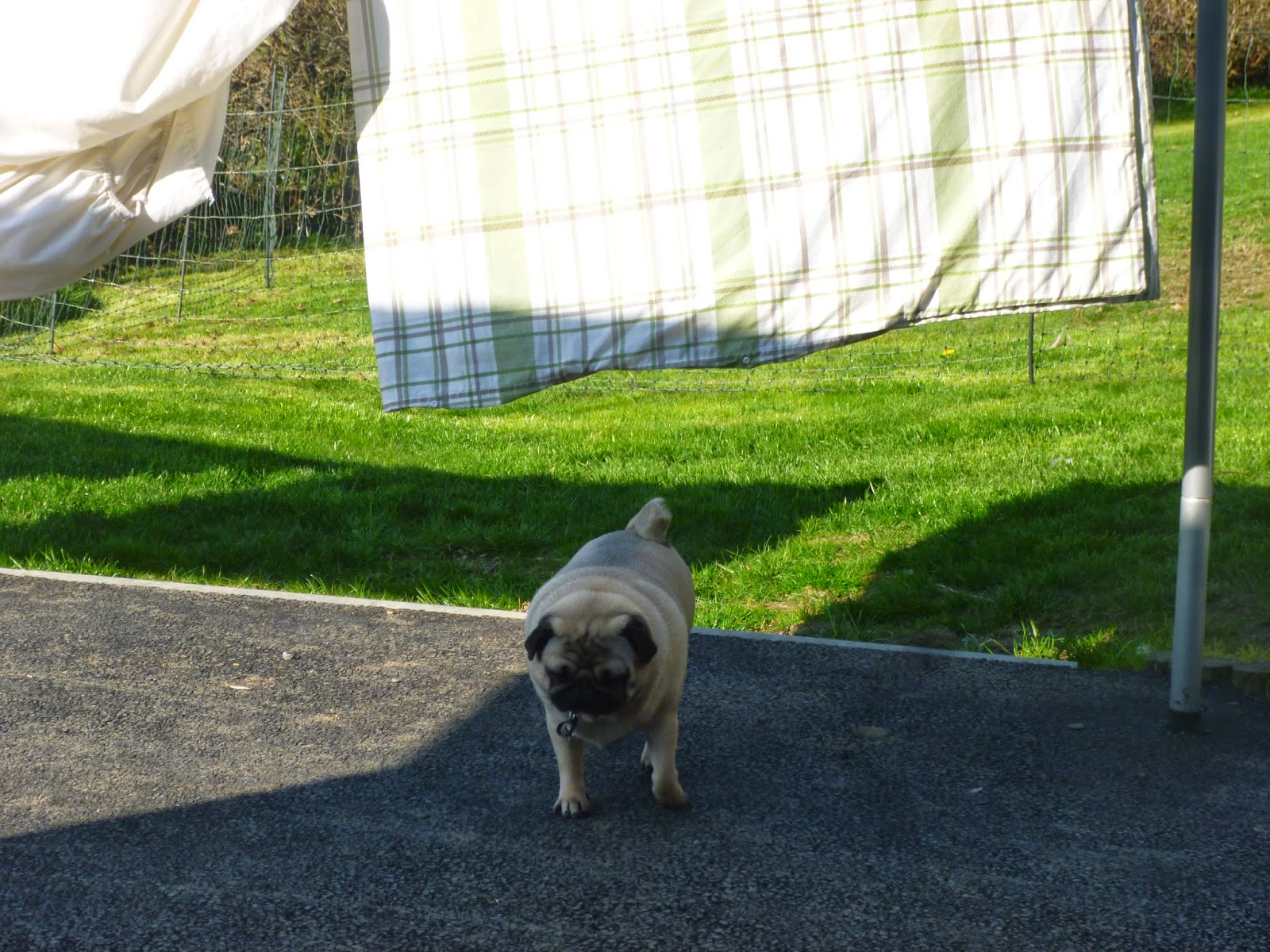 ... Suky appears from underneath the washing, we'll bring that in when we get back it's lovely and dry.


We walk past the house, across the drive,  Sulky 'walks the plank' past the polytunnel  and we pass through the still gateless posts to the paddock  and meander along past the trailers.  As usual I stop to check that no little creature has fell into the paddling pool that sits full of rainwater, there are stones and a strip of wood in place as islands and a ramp should some unfortunate critter take a tumble and fall into the water.

Suky is trotting by me,  Mavis is on her extendable lead as usual at full stretch ... wanting to be the first to discover anything out of the ordinary.  Ginger has run ahead, lolloping along the fence line like the sleek ginger streak of feline energy that he is.  I spot Rosy on the hillside and call her name, with a bark she lets us know she's coming, and she runs round the fence to join us. 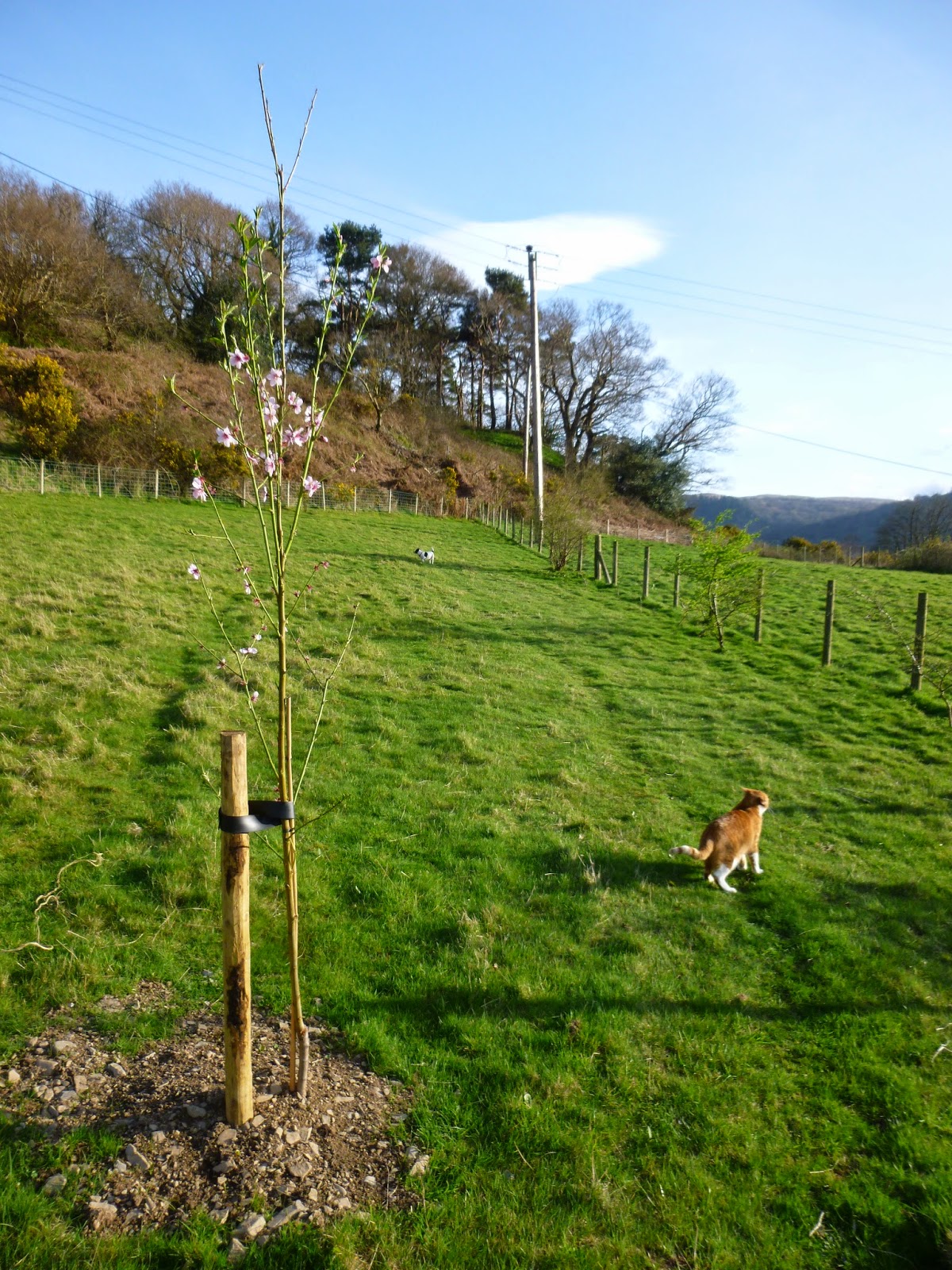 You can just about make her out in front of Ginger, already way up the hill, when she runs she's like a Jack Russell shaped whippet, the speed is amazing. 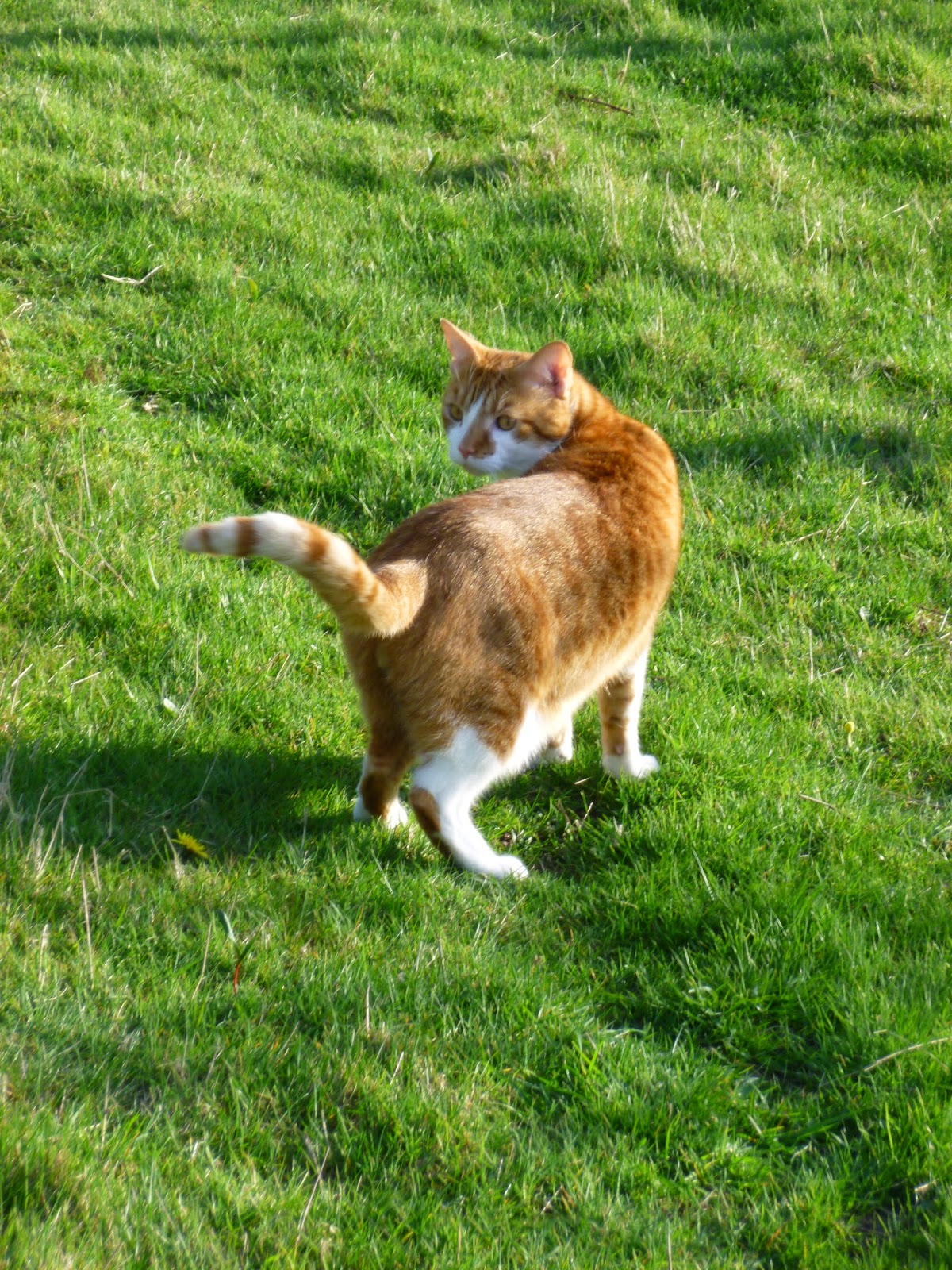 "Come on" Ginger seems to be saying to me "stop that snapping with the camera, lets walk." 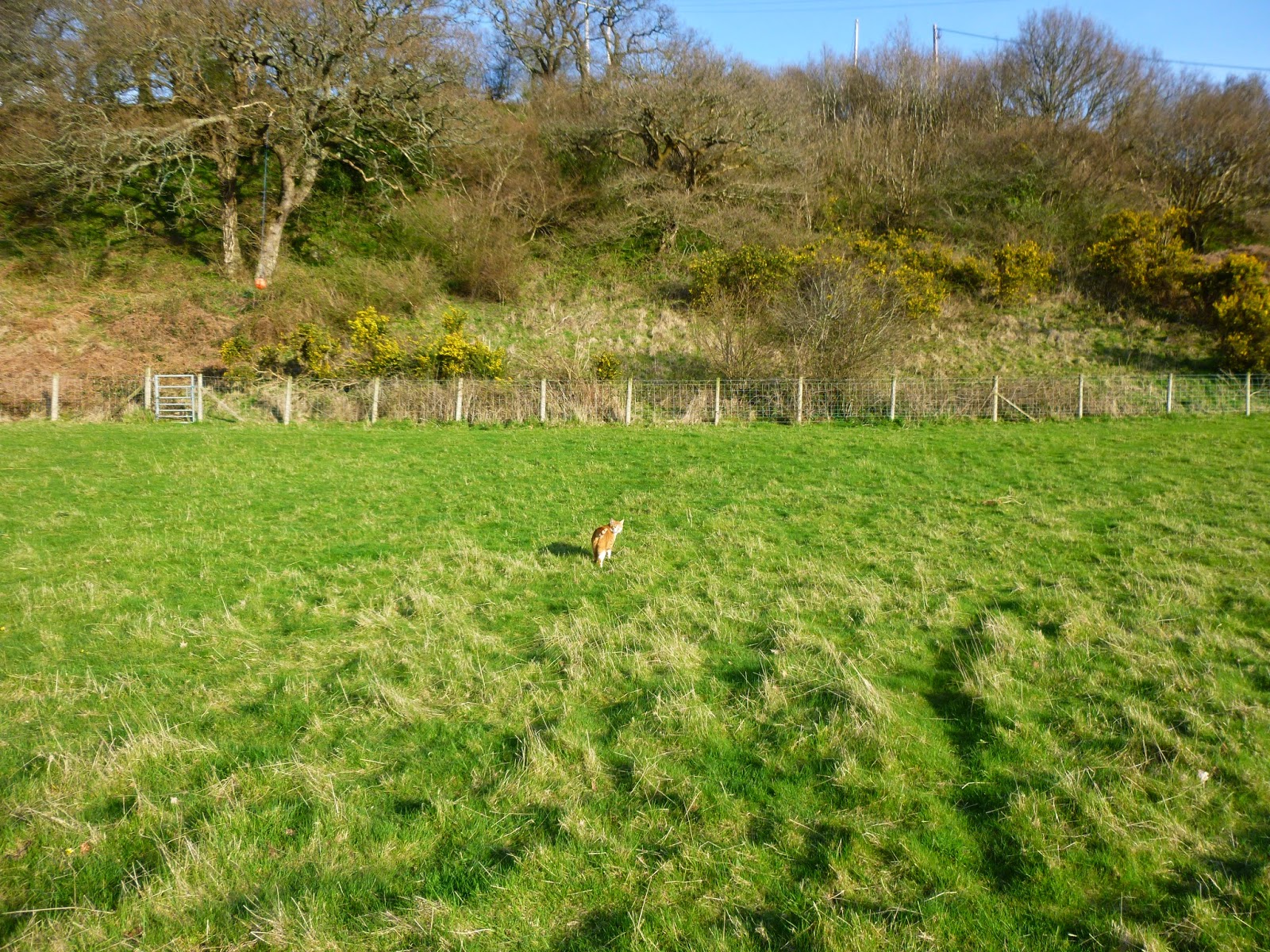 He runs ahead flitting this way and that, backwards and forwards over the paddock.  The field might only be around two acres but the dogs and Ginger cover it many times over in the course of a walk. 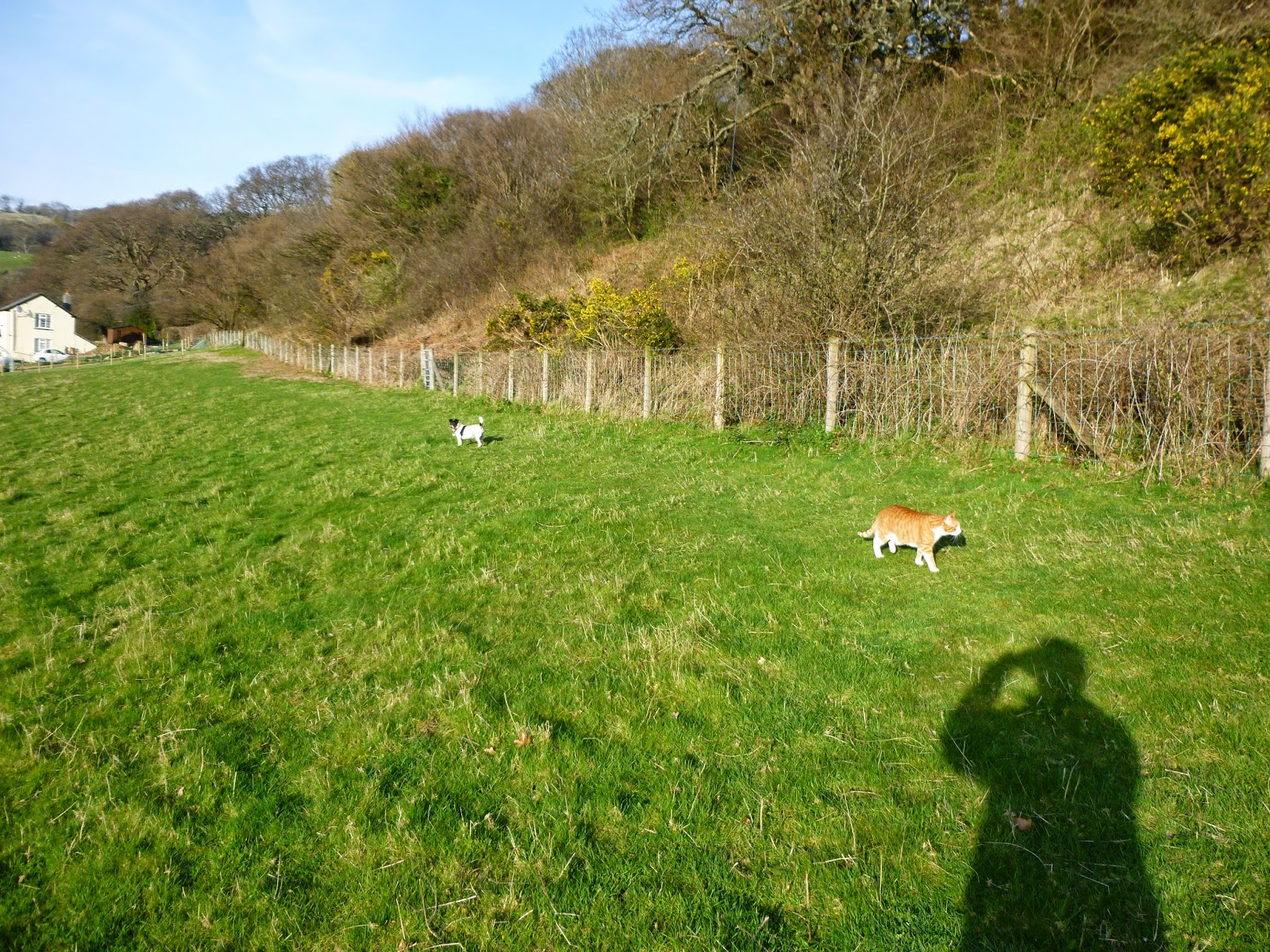 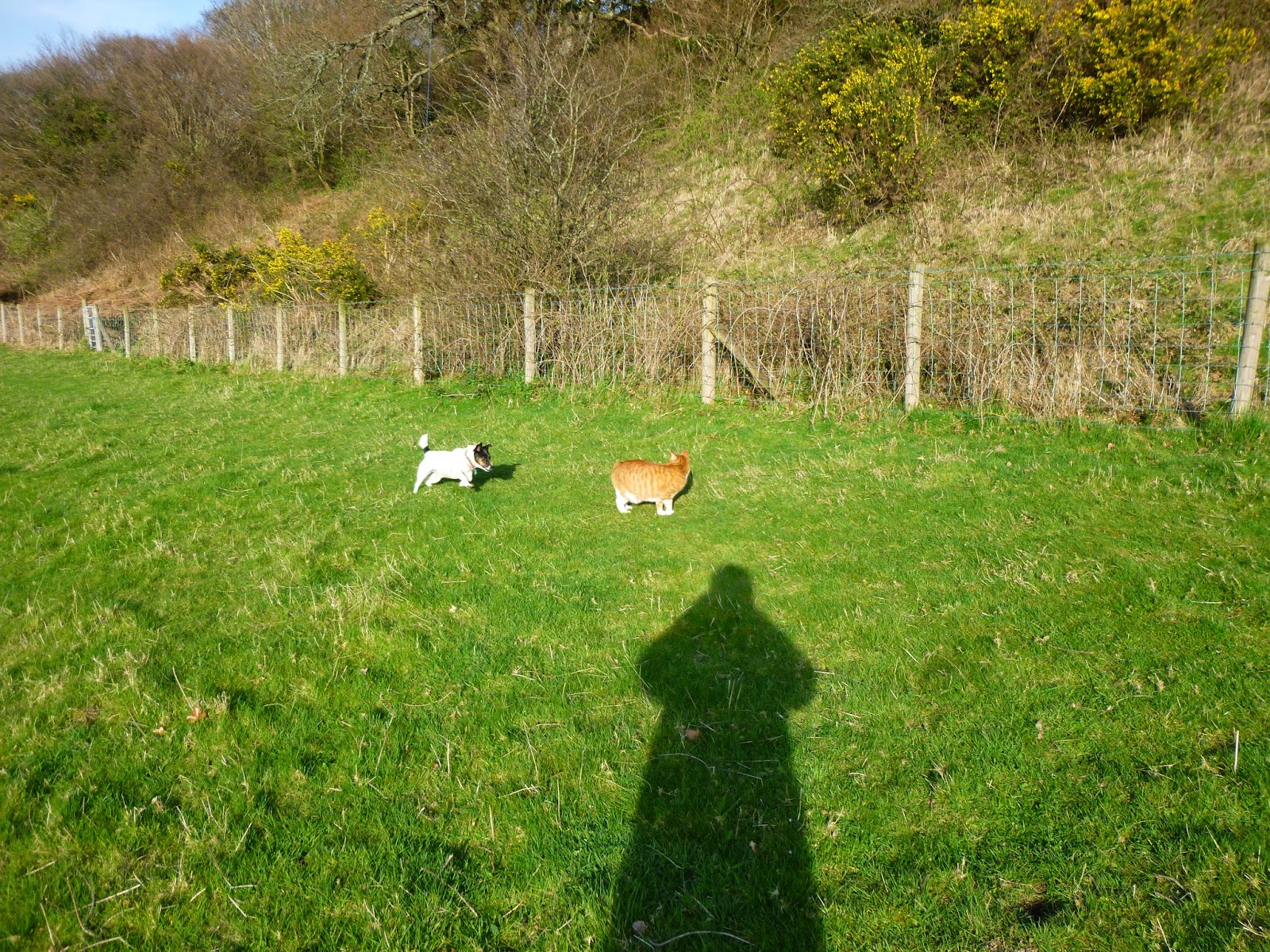 ...and they turn this way and that, not sure why the walk has slowed. 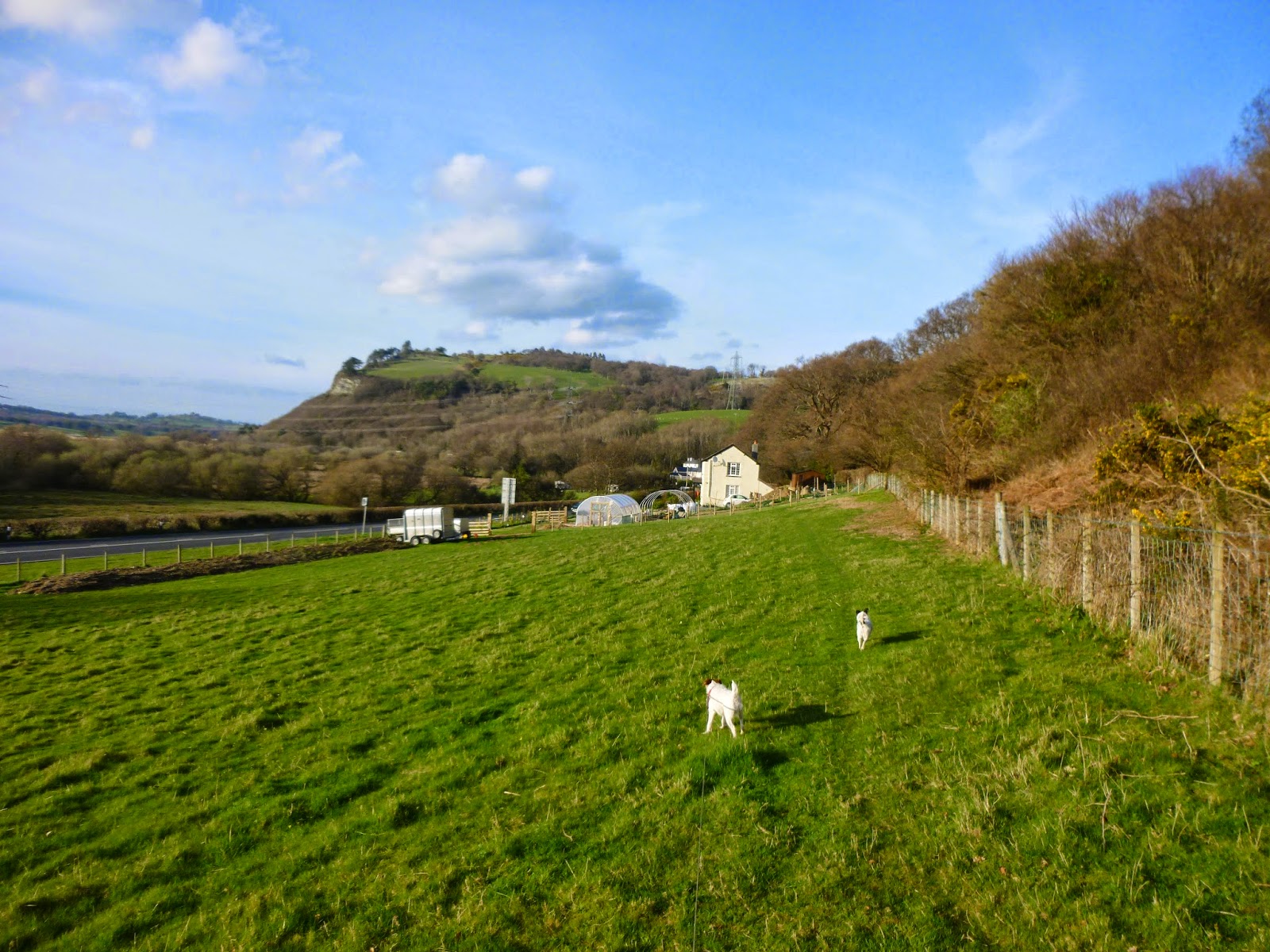 Mavis decides to catch up with Rosy and they head off together.

The sky looks magnificent, setting the house and the hillside off a treat.  Such crisp colours develop at this time of year, if you miss a day you miss a treat.  I always take the time to notice ... what is the point of living somewhere so beautiful if you don't take the time to stand and stare. 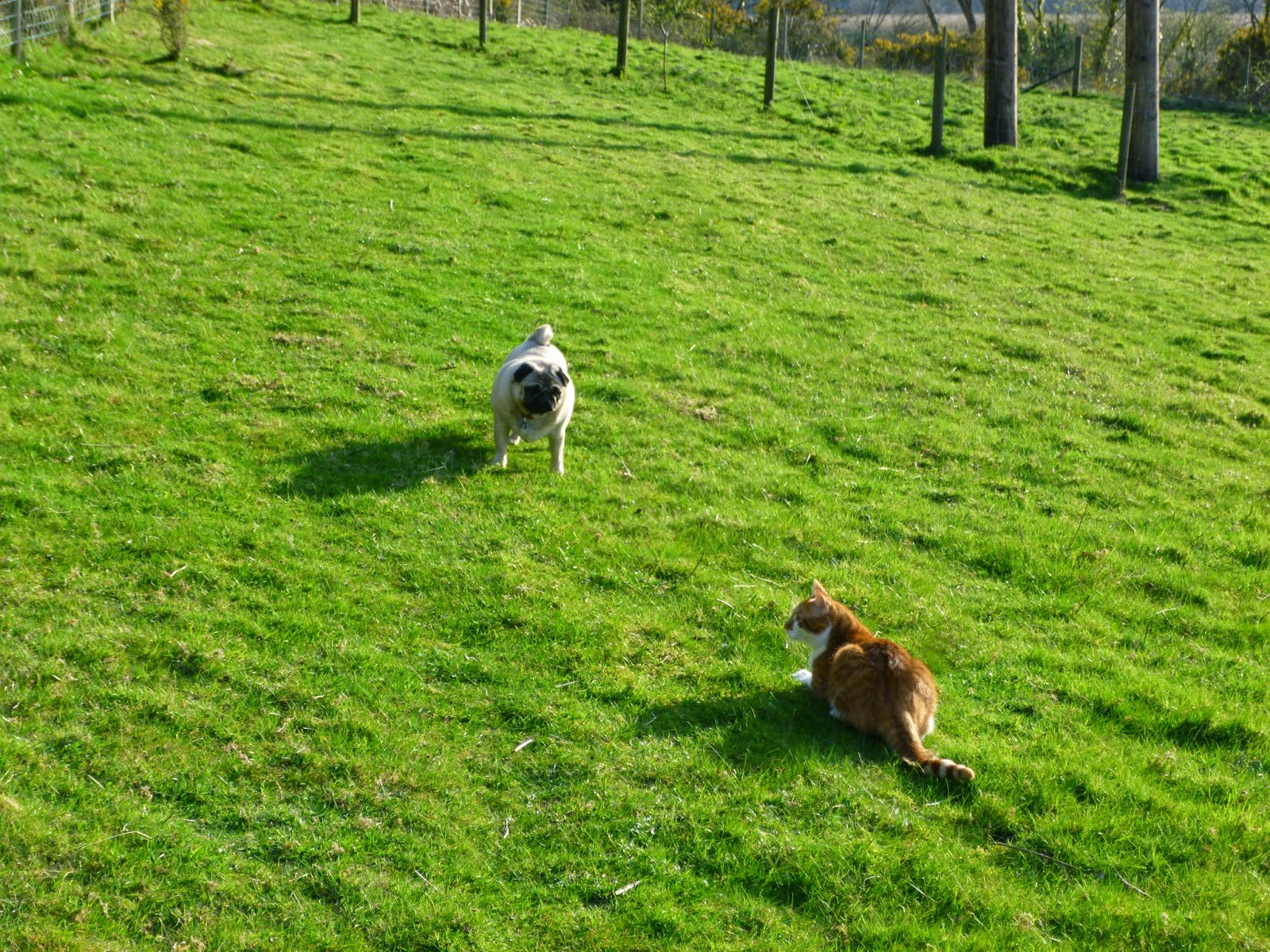 Suky and Ginger are behind us, I turn to see what they are up to, it appears Suky is daring Ginger to pounce on her .... 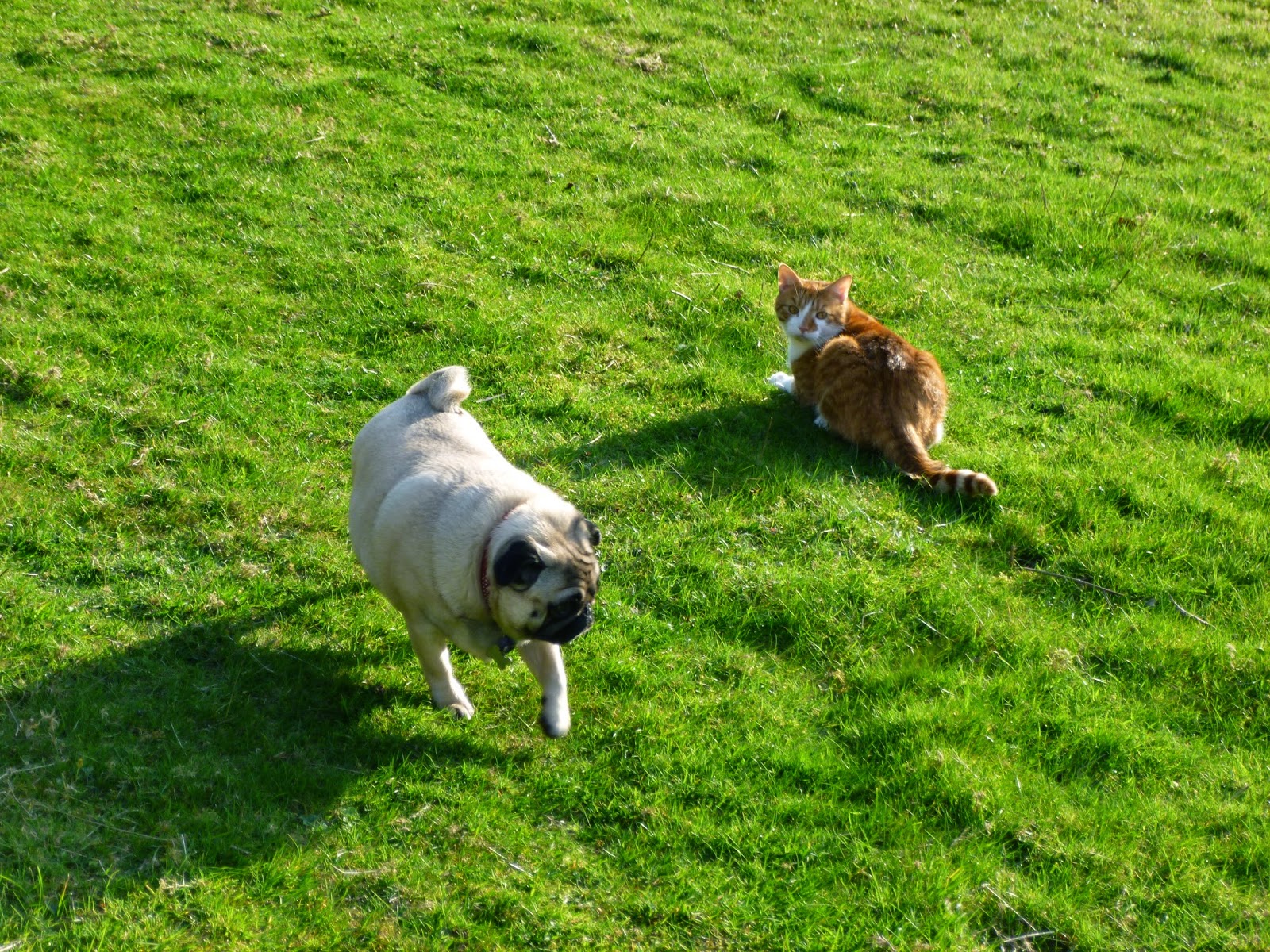 ... but his attention is elsewhere and she passes with no game. 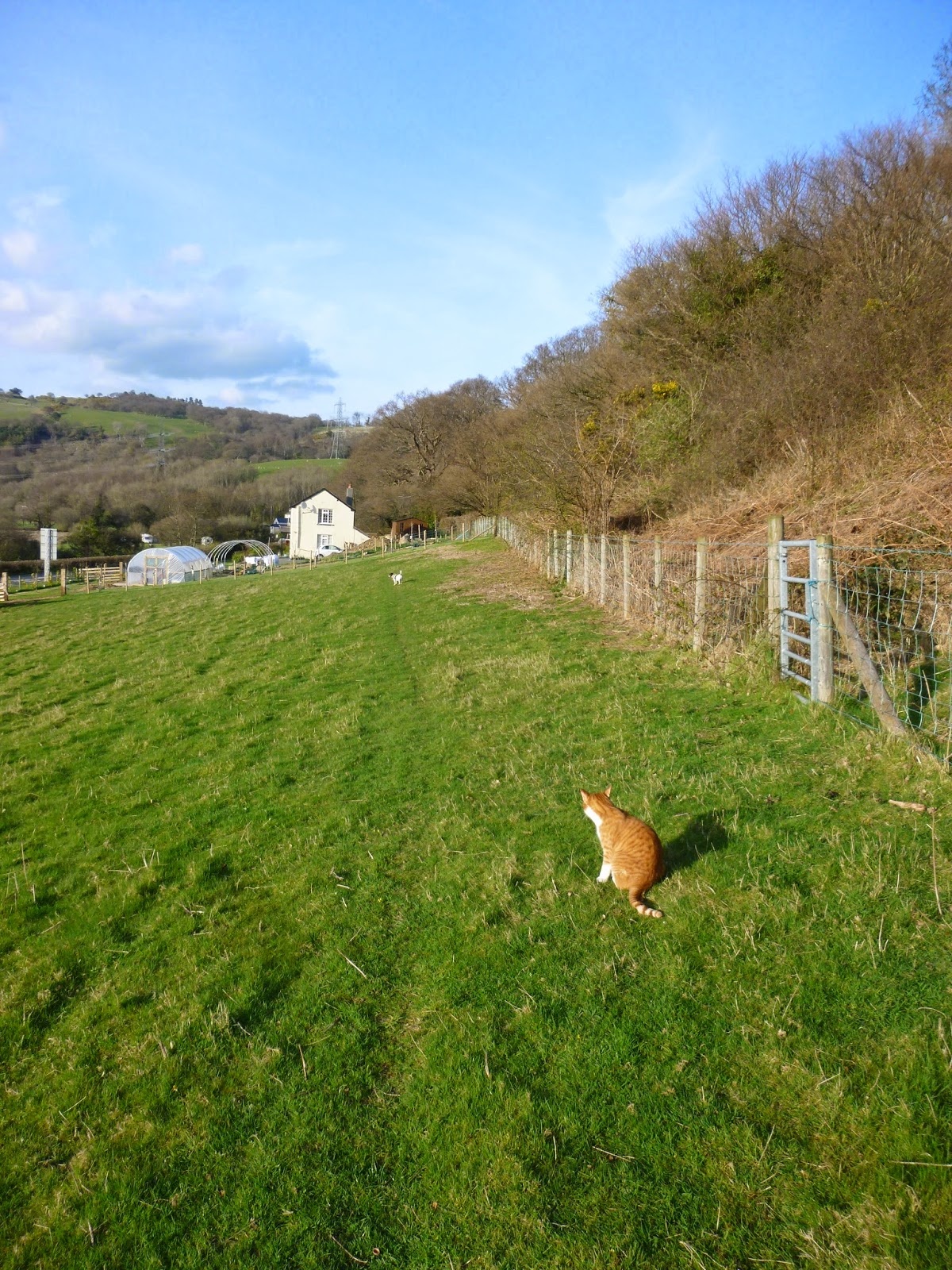 He seems to realise he has missed something and looks around. 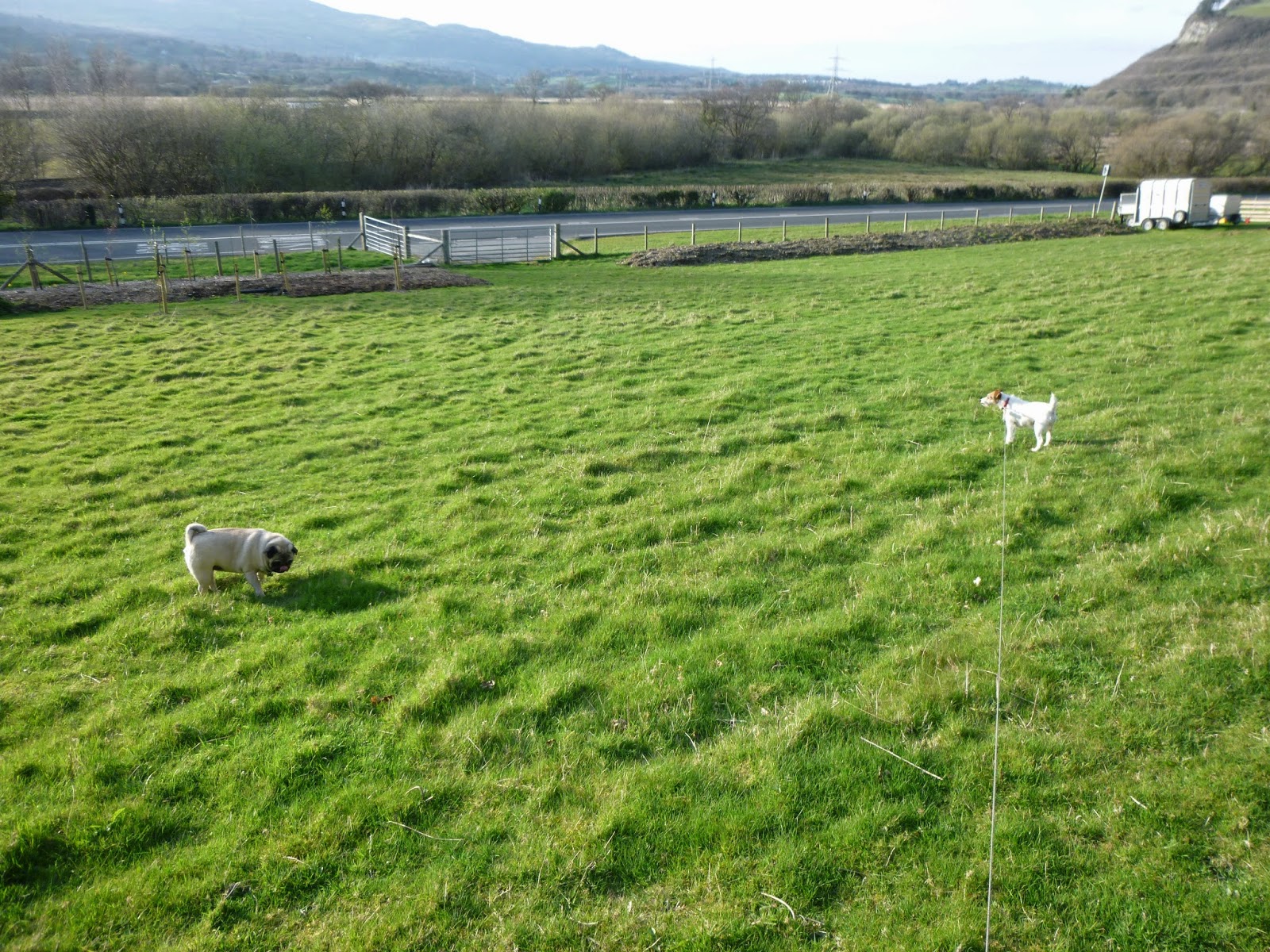 But Suky is now lower down the slope sniffing at something she has discovered, and any game is far from her mind.  There is a charp crunching noise as Mavis discovers a nut left by a squirrel and takes great pleasure in crunching through the tough shell, she rarely eats the nuts they contain but likes the challenge of the crunch.

While we are on the hill I also take the time to listen, standing on the hill you see so much then when you focus on the sounds instead you hear so much.  Red Kites circling overhead with their unmistakable cry, the rooks squawking and squabbling in the trees, the sweet sound of the birdsong, the boys are singing well this year, enticing the girls to pair up with them and build nests.  Suddenly there is the sound of ball on bat and excited children's shouts, the children on the campsite are having a game of cricket, they can now that the Easter holidaymakers have gone home as there is room between the caravans and tents for games and the younger children are making the most of it.

Nearer to us there is the sound of a ewe calling her lamb closer to her, and the answering call as it does it's mothers bidding.  At this time of night they settle down in their little family groups, and the bright grass of the field is dotted with puddles of woolly bodies cosying up to each other ready for the chilly night ahead. 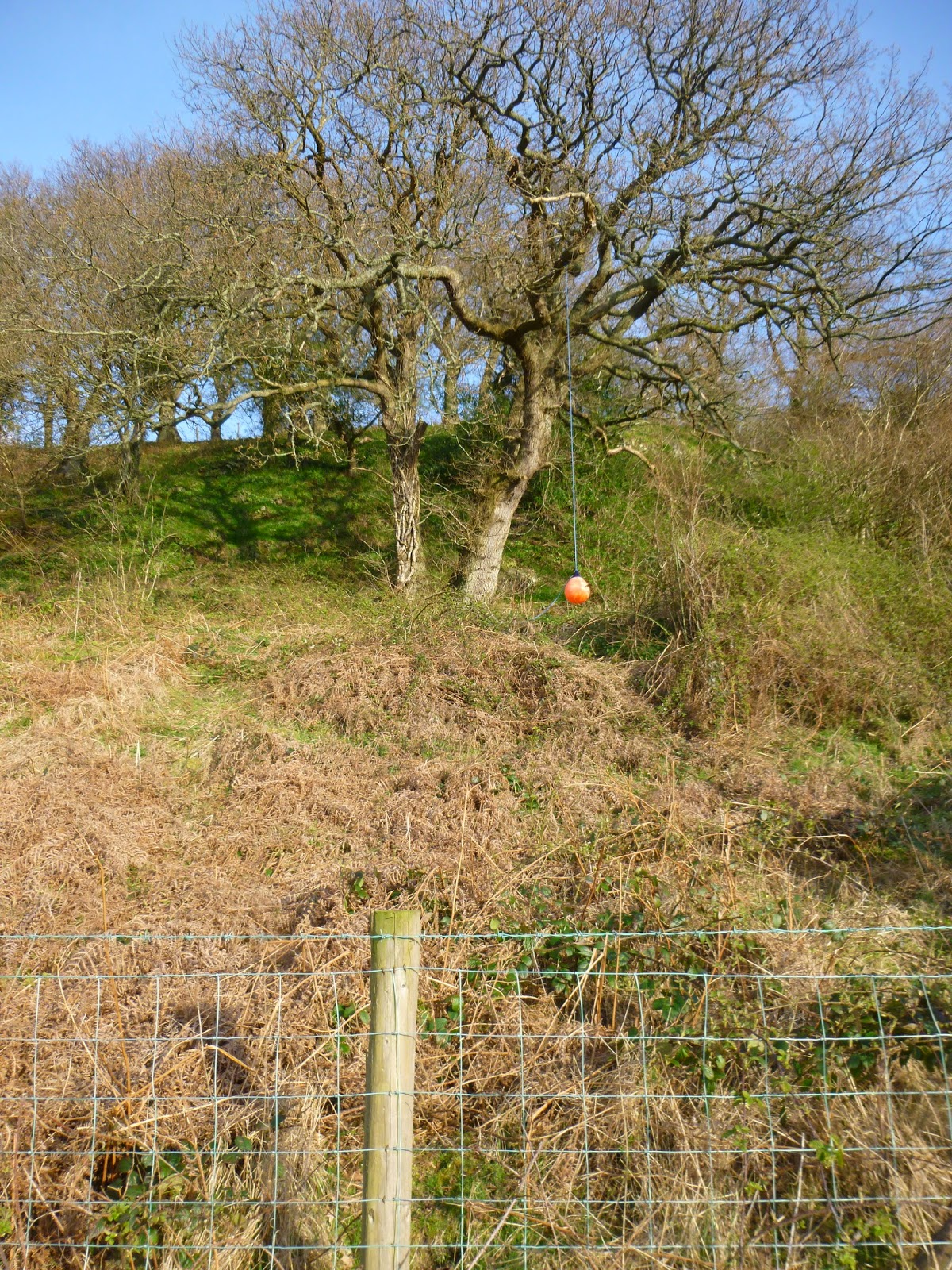 We pass 'the buoy on the hill', a landmark around these parts, we've been asked a few times if we live in the house with the buoy!   It was tied to the tree by the boys who used to live here and no doubt it will stay there for a long time as I have no intention of climbing the tree to untie it.  Maybe a shot with Lovely Hubby's air rifle will bring it down.  Unbeknown to both of us until the first time I picked up his gun I am a crack shot, you name it and I can hit it.  A pretty useless talent I thought as I could no more kill anything with it than run a marathon.  But maybe one day I will 'bring down the buoy'. 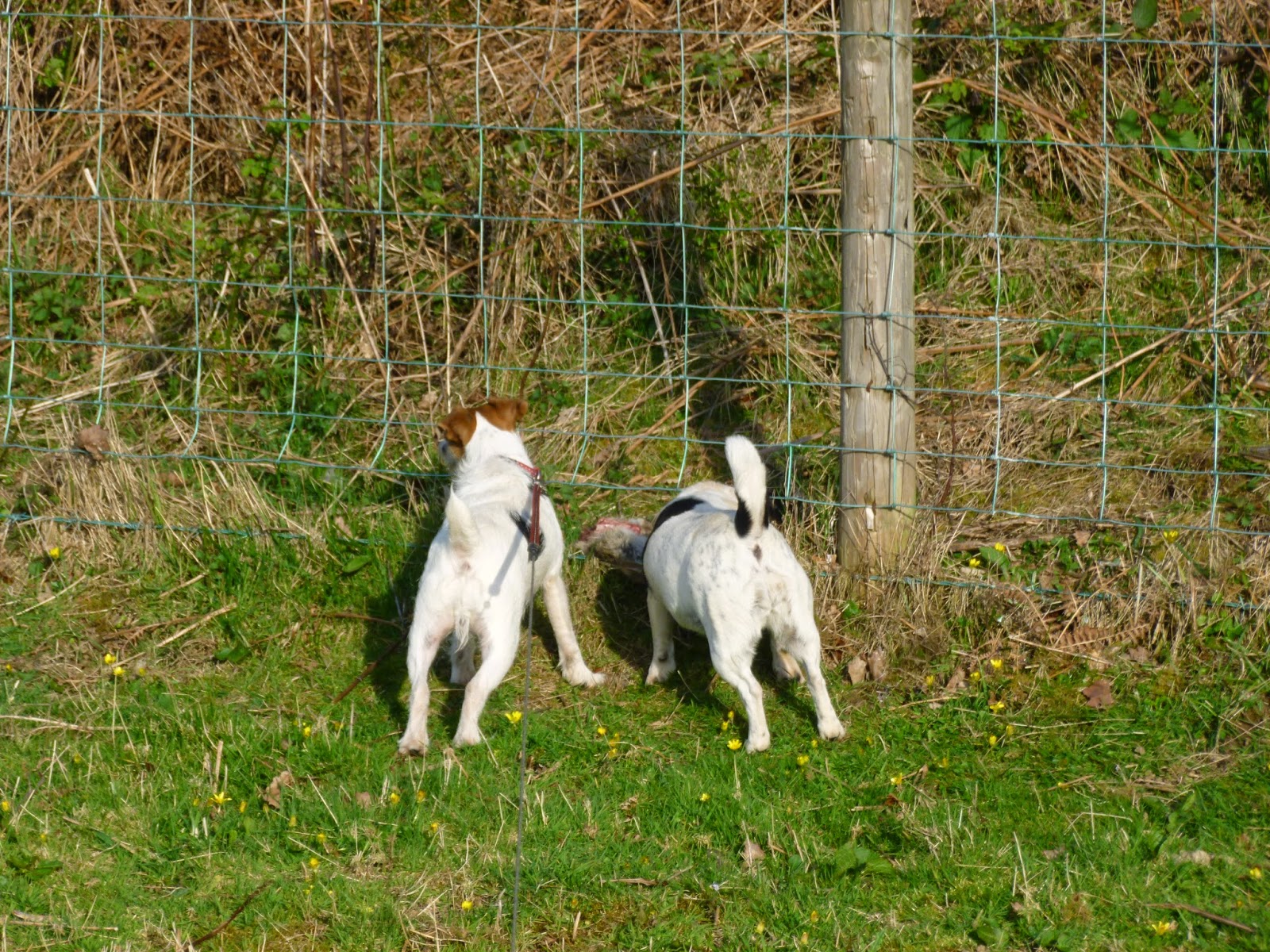 The walk is coming to an end but suddenly movement in the undergrowth catches the attention of the Jacks, they snuffle in the grass at the fence and listen, alert to the noises of what is surely a rabbit moving cautiously back to its burrow to avoid the dogs it can smell.  You might be safe for now Mr Bunny, but if you keep eating my flowers I will have to send these furry troops to sort you out.

We head back to the house, I fetch in the washing and the dogs settle down to an evenings snoozing.  Ginger usually stays out longer, loving the dusk as it falls and no doubt chasing rabbits as they make their way home.

I hope you enjoyed your walk with us, it happens at least twice a day, ...the dogs do get other walks but they love this daily patrol of their territory, knowing what is happening on 'their hill' means they sleep their doggy sleep with only happy dreams of rabbit hunts and exciting smells.