My Musings ...... and this Years Subtitle

I said at the end of the last post that I would share my 'musings' with you.  Well I've been missing an extra day purely because apart from being very busy, I've been doing lots of thinking about the coming year.

Every year I give the Blog a subtitle, the previous ones are always on the sidebar but as a refresher this is what they are -

I was racking my brain to think of this years subtitle, and if truth be known I'm still not entirely sure.  We are still at heart townies on our way to becoming country folk although we have learnt so much over the last few years.  We still have our chickens, although there won't be any pigs joining us for the next couple of years.  We are still living simply, not as simply as I would like but we are working on that and the journey is ongoing.

We do live simply and in some ways frugally but not entirely so, enough however for us. We do own less, less than we have for a long time, but this is still a work in progress, on a daily basis in fact.  Although last year was subtitled 'Back to Basics' we didn't entirely get there due to the planning permission taking so long to enable us to get the polytunnel and net tunnel erected.  They will be completed in the next few weeks thank goodness and this year we will be growing and eating our own food at last.  But I won't be repeating a sub heading.

So what to aim for this year?

My mind has been all over the place, my first idea was a year of not spending,  but Lovely Hubby pointed out we will be having the garage and workshop built and things are bound to be needed, and not spending in the house but spending on other things would make things 'bitty' and complicated.

I had other ideas, lots of them but one by one they were disregarded as too extreme, to time consuming or just two wacky.  What I have decided on after much deliberation is something that has been rolling around in my head for a long time, in fact since I put this on my sidebar!! 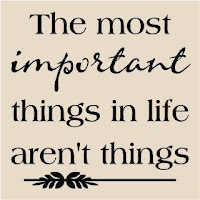 I don't need lots of things anymore, I don't need excess of anything.  I know what's important in my life and that is the people and the animals, and then much further down the list .... the things that I do truly need, the food, the clothes, the day to day household things etc.

So this year is going to be all about 'needs not wants'.

The picture at the top of the post and shown again here, taken from Google Images, sums it up simply and beautifully.  If you buy what you do not need you are stealing from yourself.

If you go out and buy that lovely handbag whether it be with cash or on a credit card because you want it and not because you need it as you have no other, you are stealing money from yourself that could most likely be better used elsewhere.  Maybe an emergency will crop up and the money would have helped, or maybe you are plunging yourself just that little bit deeper into debt .... or in our case if we buy something that we truly do not need we are delaying by the hour, day, week or month the day our mortgage will be paid off and we will own our home and little slice of Welsh hillside lock, stock and barrel.

So for this year the subtitle of the Blog will be 'Needs not Wants' a reminder to me when I come on here to post each day that if I need it I can have it, but if I want it I have to think about it just a little bit more.

And in the time honoured tradition of me, this Blog and the new year I have already started a little Challenge linked to the Sealed Pot.  I've rambled on quite enough for today so I'll be back in the morning with my plan .... although I'm sure a lot of you will guess .... and it links quite nicely with the whole 'needs not wants' ethos.