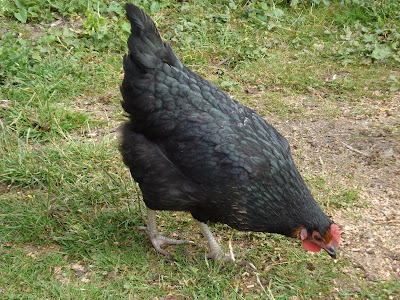 Poor little Rachel Rock Star has been living in a cardboard box for the last three days.
She started being off colour on Friday night so we brought her in for a warm, then she got VERY warm so we decided to she was simply going a bit broody and gave her four Pekin eggs to sit on. This is always a good idea if you have a hen that's off colour as it gives them a reason to live, the thought that they are going to be a Mummy.
~
She loves her little eggs and has been steadily sitting in them and living in her box until this morning, then I thought (after clearing up the biggest chicken poo ever seen, and having to open every window in the house to let out the rather pungent aroma), that it was time for her to re-locate to somewhere with a bit more fresh air, for her benefit and ours!! Maybe she just had a very bad tummy upset and now that she's expelled the poo mountain/backlog she'll feel a bit better.
~
After setting her up in the Eglu (also known as chicken hospital) she is now back on her eggs and sleeping peacefully. The house is almost back to it's usual smell of lavender and wet dogs and I have just got to get out the hoover......I'm not into a straw covered carpet in my living room!!
~
Hope your day is going well. Now to get on with the jobs I had originally planned, a final big sort out for our last big Car Boot of the season on Sunday.
~
Sue xx
Posted by Sue at 09:12