A Very Dry Bank Holiday, with No Thanks to the NFU 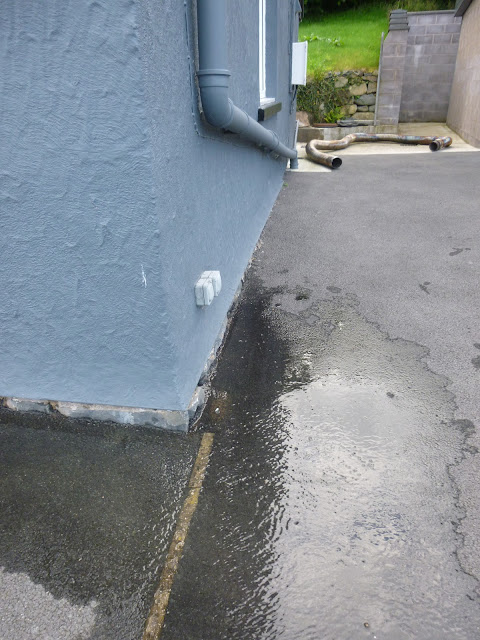 We woke up on Friday morning to a steady current of water flowing from underneath the house. 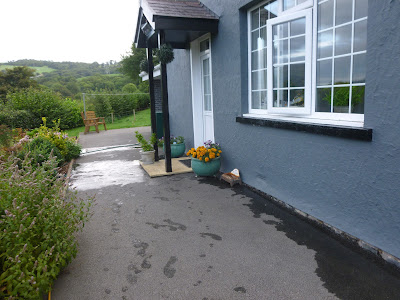 It had obviously been flowing for sometime as outside it was draining away in all directions. 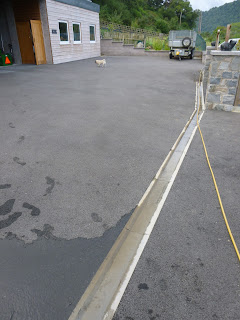 Luckily the heaviest flow was making for the drains we had installed and the soakaway system we have under the driveway. 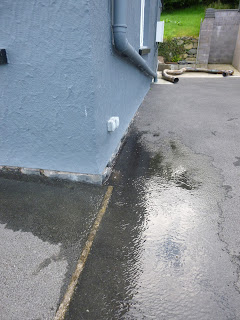 This picture just does not show the force at which it was bubbling away from under the house. 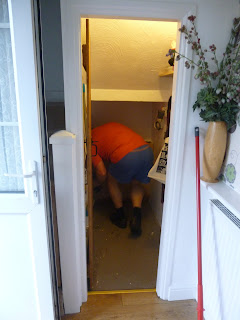 Luckily the only damage inside the house was the flooded under stairs cupboard where the stop-cock is and the water inlet to the house.  The cupboard was quickly emptied and the sodden, dripping carpet slung over the washing line to drip the day away.

We called Welsh Water who had a couple of guys with us within the hour, all they could do was to give us the number of a local contact and turn our water off at the mains.  They left us with four bottles of drinking water and drove off.  We tried ringing the contact but all we got was an answerphone over and over ... obviously with it being the Bank Holiday weekend he just didn't want any more work to do.  So we called our insurance company for advice.

Now we've been with the NFU for the last eight years, we insure our house with them, it's contents, the cars with them, the trailers and the tractor and we have never had to call them for help before.  Thinking of the adverts on a television when a nice chap comes rushing to your assistance we naively thought they would have the answers to our predicament.  Now although the folk on the other end of the line were very polite the only thing they could arrange was a plumber/water specialist to come out on Wednesday of next week.  WHAT!!  They expect us to last SIX days without a water supply or toilet facilities.  After discussing things between ourselves and trying the water boards contact number again, with no success, we rang them back and said this just wasn't good enough. So they kindly decided this wasn't a routine call out but an emergency one and upgraded the repair date to TUESDAY!!

So this weekend we have rigged up a system where we turn the water on at the mains, meaning a trip into the main road for both of us, with Alan getting on his hands and knees to turn the supply on and me standing behind to warn him of oncoming traffic, then we quickly do as much as we can before the water starts filling up the foundations of the house again.  Fill the trough and every available vessel in the polytunnel, fill the sheep's three buckets, fill the chicken drinkers, fill the kettle, water bottles, jugs and large pans in the kitchen, do one load of washing in the machine and run a bath.  Then we repeat our journey onto the now even busier main road and turn off the supply.  With lots of dashing around we've got this down to an exhausting 35 minute routine.

Coming in we each have a relaxing dunk in the bath and then leave the water in for toilet flushing during the course of the day.  One thing's for sure we'll not take our water supply for granted again, and I will be pushing for Alan to connect the pump to our underground tank for future outdoor watering use.  But in typical male fashion it seems shelves in the workshop are still of higher priority than me being able to water vegetables with free Welsh rainwater. 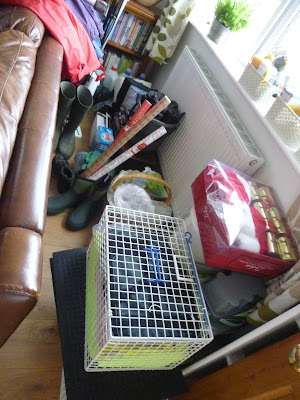 There was however, one light in this dark and waterless tunnel ... we had to empty the under stairs cupboard in a rush. I was astonished at the amount of clutter in there.  Things just get added and added to a little seen space don't they, without a realisation of how much stuff you put there. 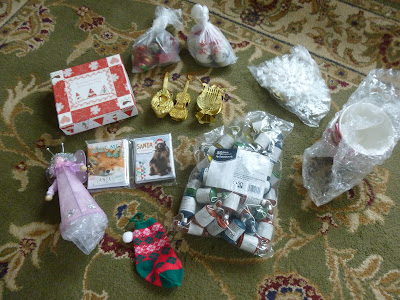 So I decided to continue with yesterdays mini Challenge and pick out things to add to the car boot box.  We had one bag and two big boxes of Christmas decorations for a start, so I decided that one box was more enough for us and whittled away at things.  Counting them into groups of ten again as it somehow focuses the mind. 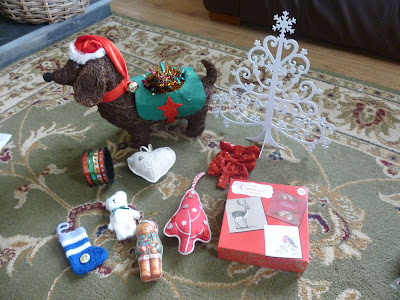 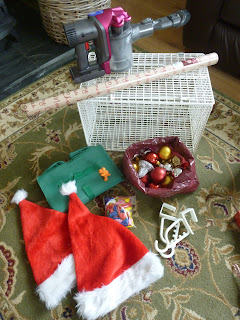 Thirty things gone in the blink of an eye. 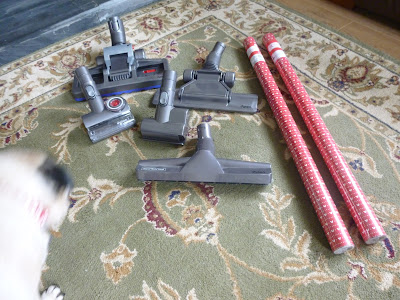 Hoover attachments that I have never even used, excess wrapping paper that never will get used, a total of 37 items found in 10 minutes. 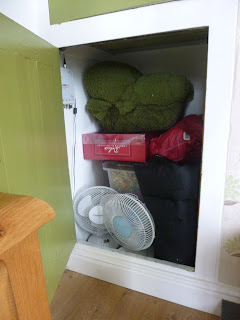 And instead of waiting to put what was left back under the stairs when everything has dried out, I put all the Christmas stuff into the lower cupboard in the living room ... because there was lots of room in there after last weeks sorting marathon. 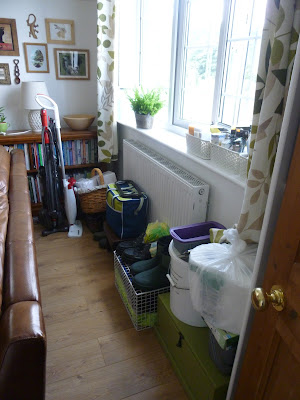 So now there is a lot less stuff stashed behind the sofa waiting to go back into the cupboard, and it's not bugging me quite so much and at least something good came out of this watery mess.

I hope your Bank Holiday weekend is going well ..... at least the weather is dry here and we had a very successful car boot sale yesterday, coming home with no less than nine empty boxes and £108 for the car boot kitty.

There is one more car boot sale in our favourite venue this year, so I will be having one last push to fill up some of those empty boxes with things we no longer need or use, just to see what I can make our total car boot sale takings up to for this year.