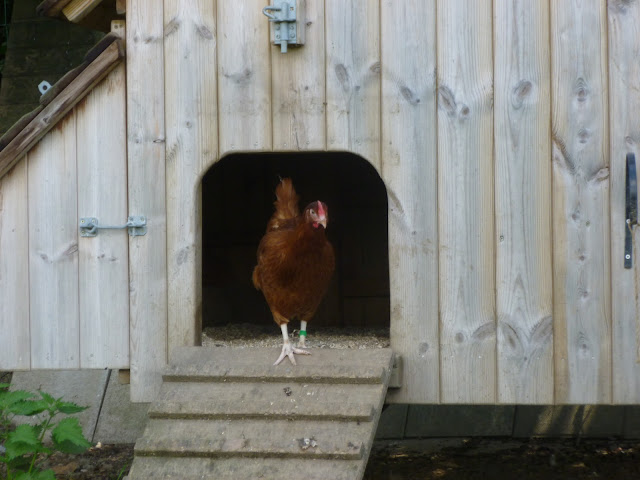 A little 'chickeny interlude' between the 'Tour of the Plot' posts to introduce you to our new girls.

Bought today from the same place we buy all our chickens here in Wales, they are four Calder Rangers.  A Calder ranger is a hybrid hen that lays well all through the year and because it has been born and raised here in North Wales won't stop laying for the colder months as our 'softer' Southern girls do. 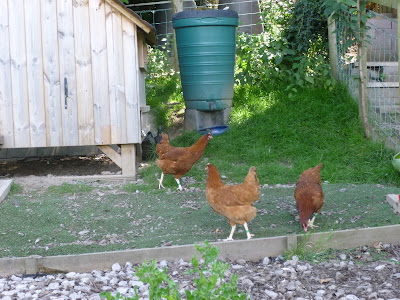 They were confined to the henhouse for half an hour after we got back home with them, to give them time to get their breath back after a bit of a slidey journey in the back of the truck.  It's all uphill and down dale from our farm to their former home and there was nothing else in the truck to keep the crate still, so the it moved around a bit with each decent   ;-) 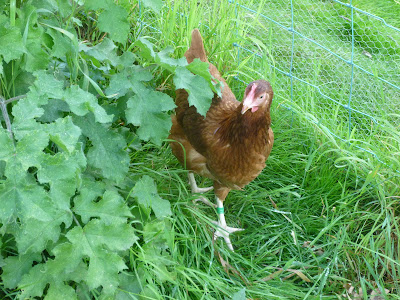 After half an hour in the henhouse I opened the front door for them, and once we had retreated to outer Chicken World, three of the girls came tentatively down the ramp and started to explore their new surroundings. 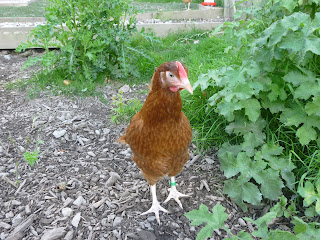 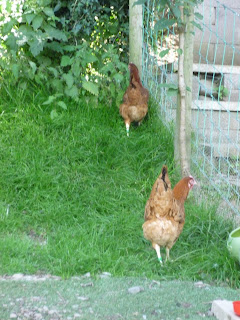 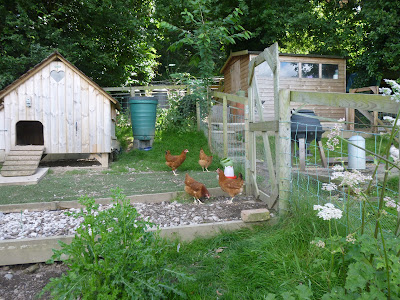 After a few minutes I went back into the inner area and encouraged the one girl left in the house to join her sisters, as I wanted them all to explore together. 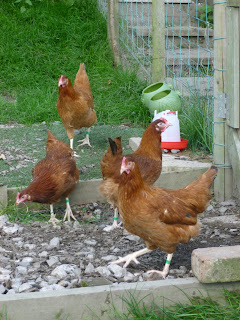 They have most likely never been on grass before as they have been raised in a large open-fronted barn (because of the recent poultry restrictions),  so it was nice watching them tugging at blades of grass and eating them, pulling bits out of each others beaks as they each thought the other had something more tasty to share. 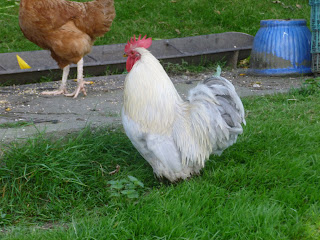 After an hour or so in inner Chicken World and lots of exploration of their new surroundings I opened the gate and they trouped out en-masse to larger Chicken World where they were immediately joined by Jack and his current band of wives.

There were a few skirmishes, as is the way when you introduce new birds to an established flock, but as ever the gentleman, Jack stepped in to calm things down and took a couple of his new ladies literally under his wing to feed them titbits from the grass and calm things down. 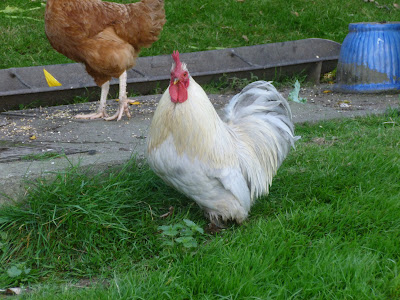 Now they are all mooching about in the lovely sunshine, enjoying fresh grass and corn and tentatively forging new friendships.  We will just have to check at dusk to make sure the new girls get into the bedtime routine of settling down in the henhouse for the night.

These girls will most likely not be individually named as they are extremely similar to look at ... unless of course one or more of them worm their way into my heart with their personality, as is so often the case ... so as I have put matching green leg rings on them will, from now on, be known as 'The Green Girls' .... now that'll confuse a few folk  ;-)