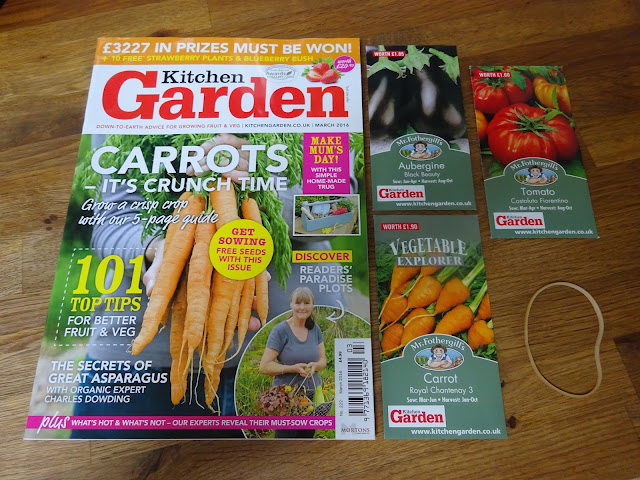 The postman delivered lots of freebies yesterday, there were the coupons talked about on my other blog HERE and my Kitchen Garden magazine for March with it's free elastic band .... which was wrapped around three packets of seeds to the value of £5.35!!

I'm keeping tabs on all the free seeds I have had over the course of this subscription and it will be interesting to see what the value adds up to at the end.  I'm not sure if this is the last copy or if there is another couple still to come, as I have not had a letter begging me to continue with the subscription I'm guessing there is at least one more still to come. 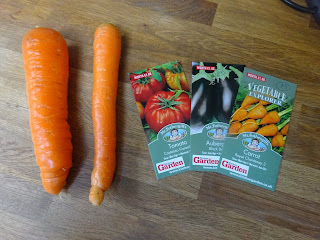 I called in the polytunnel on the way back from walking the dogs around the paddock this morning, and for a change I decided to go for a carrot based soup for this weeks lunchtime soup.  I usually make it on Monday but this week I still had a large portion left from last weeks soup pot so I decided to wait until today to make a fresh batch.  I was going to get a handful of carrots .... but after pulling the first two out and finding they were whoppers I decided that two would be enough.

If only I had had such big carrots for the two vegetable shows I entered last year.  I think I will have to grow some special 'show carrots' this year starting them off a little bit earlier and planting them in a tall container to get them nice and long and straight ... and of course they are so much easier to chop or peel if you want to when they are like this instead of having 'twisted legs' or 'Siamese twins'.  There's something very satisfying about still eating last years homegrown carrots and having free seeds arrive for some more carrots for later on this year.

And these free elastic bands really are adding up, I shouldn't have to buy any for quite a while  ;-)