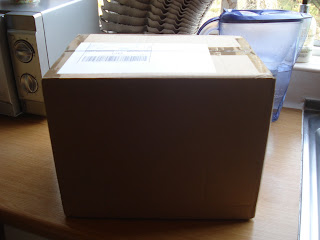 There was a knock on the door early last Friday morning.   It was gloriously sunny day and a very happy looking delivery guy beamed at me and said "Sue I have a box for you", smiling back I signed for it and took it inside, it was a parcel from a very special Blogging Buddy.  Addressed simply to 'Sue' and then the address, it meant that a friendly delivery was bound to happen, what a nice touch. 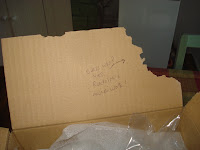 The flap of the box had been slightly nibbled by a certain Rudolph, adding to the homely and friendly treat, I smiled imagining the telling off Rudolph the rabbit would have received, although this would have been a cheaper meal than the mobile phone cable he chewed through last week!!
This all started a few weeks ago when I did this Blog post and my Blogging Buddy Charlotte from the lovely Blog Cottontails left a comment about my little bunny rabbit sat on the 'before' shot of the brown shelves.  I had been wondering what to do with Amelia my little bunny, she was too valuable to me to simply sell at a Car Boot sale, so when Charlotte said she liked her I immediately got in touch to see if she would like her.  I would rather her be really appreciated somewhere else than be sold for a couple of pounds. 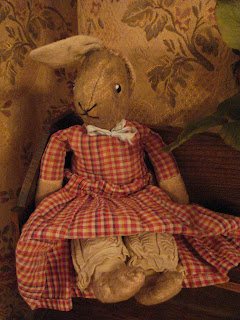 She's a real old cutie, I think from the 1940's or 50's and still wearing all her original clothes.
So Amelia was lovingly packaged up and left on her travels to her new home where she would have lots of rabbity company.  Now the lovely Charlotte would not let this gift be one sided, so emails were batted backwards and forwards and as she knew we were de-cluttering on a mammoth scale and that I was also taking part in my very own £2 House Keeping Challenge she hit upon the idea of a little thank you food parcel. 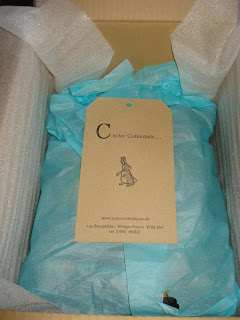 And that is what is in this lovingly wrapped parcel. 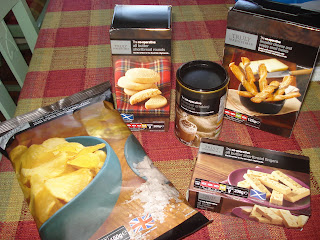 Lots of tasty treats so my housekeeping money will stretch just that little bit further.
It's always nice to have so many Blogging Buddies that are exactly on the same wavelength.
Thank you so much Charlotte.
Thank you as well to you all for the comments yesterday about Food, Food, Food, and the good suggestions about making up some of the foodstuffs to get even more money for them, although I don't know if Lovely Hubby could bring himself to sell scones to someone else, they are his greatest weakness.
At the moment I am still working my way through the cupboards deciding what to keep and what to sell.  Even if we only make a few pounds at the car boot sale it all helps in the grand scheme of things when I want the housekeeping money to last as long as possible, and it is a really good feeling to see space where once there was clutter and stuff.
I'll take some updated pictures of the cupboards once I have finished.
(By the way the lovely cheesy straws have already been eaten as have the crisps and half of one of the packets of shortbread biscuits, the other pack are being saved as I think we are off on another houseviewing road trip this weekend and they will make for a luxurious treat with a Latte at the motorway services.)
Sue xx