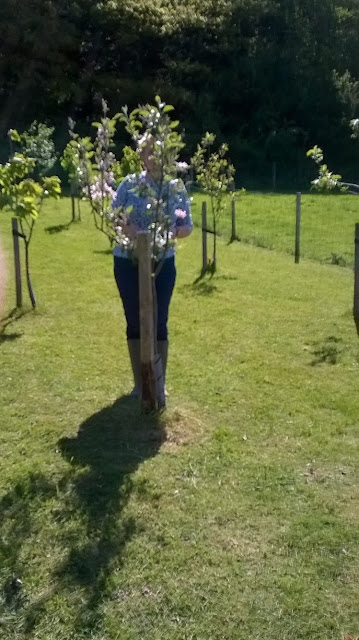 I'm pretty well known for my 'hiding behind a cabbage' profile picture .... but what do you do when there is no cabbage available and there's a man roving around armed with his phone taking pictures ..... simple you hide behind a baby fruit tree.

Thank goodness it had leafed up a bit and has some nice blossom to afford me just a little bit of cover :-) 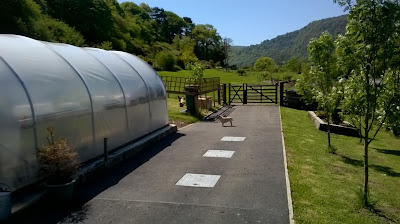 The roving photographer was snapping away just before we moved the chickens back to their original, and now much rested Chicken World.  We decided to move them on Sunday night as I really needed to get the raised beds on the hillside back into use, I have lots of plants now needing to be transplanted outside to their final positions from the poly and net tunnels. We just had to wait for dusk when the chickens were making for their night time perches in the hen house and then one by one we lift them off and put them five at a time into our large chicken crate.  It must be funny for them going to bed in one house and then waking up in another identical house ... but one that is in a totally different place.

They love being back near our house, they can see what we're up to and more importantly keep an eye out for me when I'm coming out to feed them, and I can see what they are up to most of the time.  But best of all for them they can now go through the gaps in the old stock fencing into the little wooded area that actually belongs to our neighbour, hunt for bugs and creatures to eat and keep out of the heat of the sun.

They are very happy little chickens .... 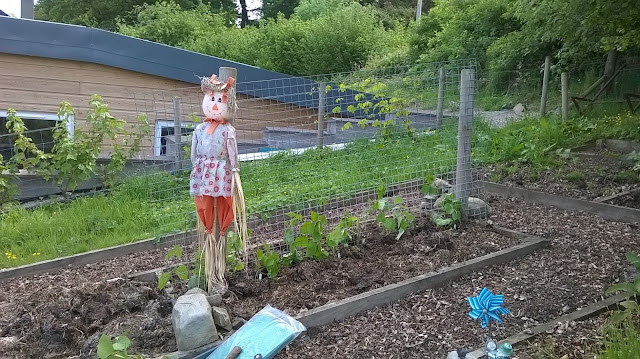 ... and I am a very happy veggie grower.

Now that they have moved back I have managed to get a large proportion of the Veggie Patch weeded this morning .... and got two beds of Runner Beans planted out.  This photo show one of them.  I'll be adding some more vegetable plants to the front of the bed over the course of the next week to make the best possible use of the space I have.

It wasn't possible to plant or even weed over there before as we had three daily escapee chickens that no amount of fencing would keep in, who came out to rummage around through the chippings on the pathways between the beds and dug into any disturbed soil that they found, looking for creepy crawlies to eat, luckily they never got into the poly or net tunnels ... I wouldn't like to imagine the devastation they could have caused in there!!

So this week in the mornings before the sun gets everything too hot, I will be found mainly weeding and planting on the Veggie Patch, and thus making lots more space in the polytunnel for the Pepper and Aubergine plants to have the space they need to be potted on.