My One Thousand Mile Weekend, for Me ..... and Mavis 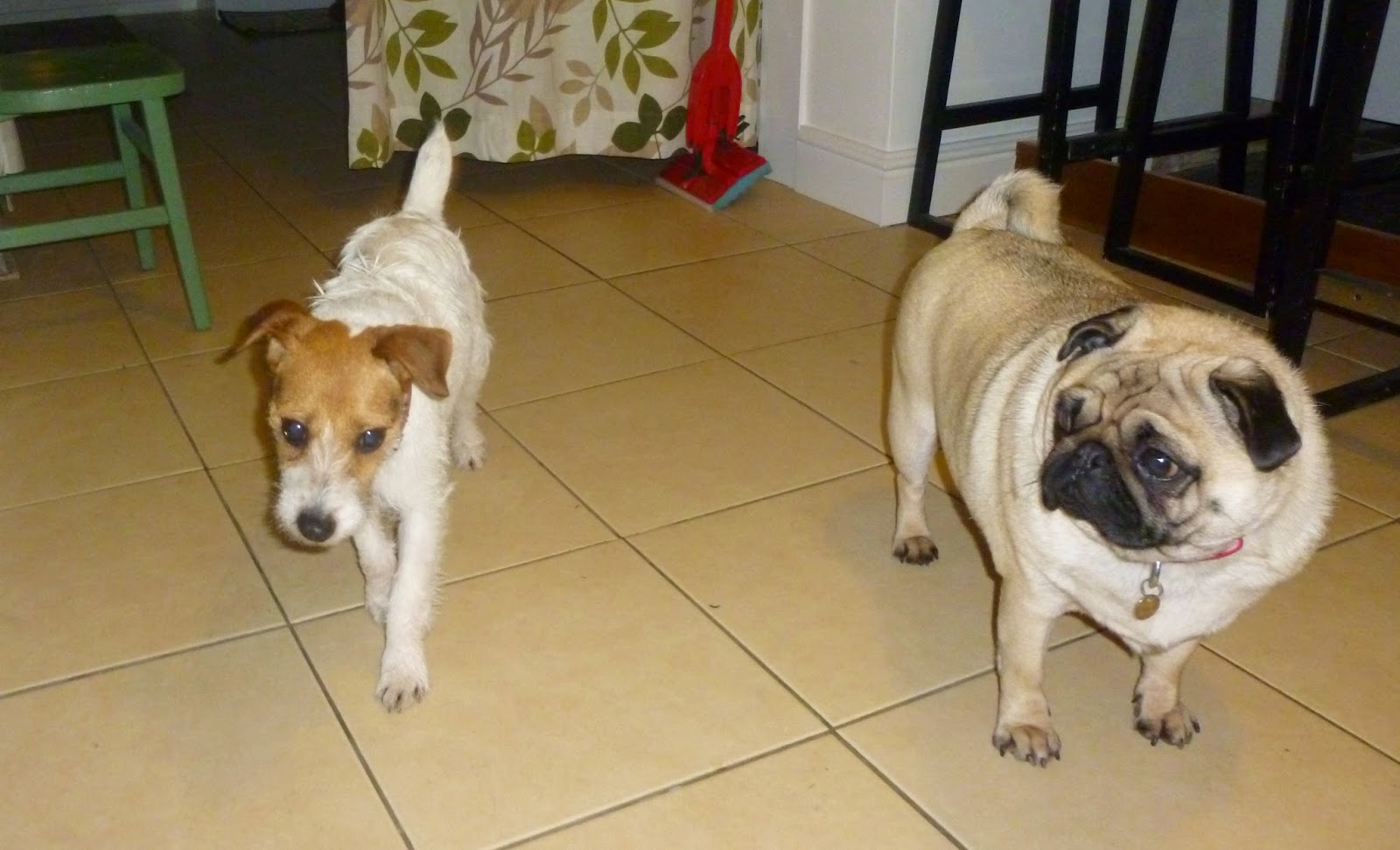 Mavis meeting Suky for the first time on 31st December.
This weekend I was away staying with Lovely Hubby at his digs in Berkshire and catching up on visiting some of our favourite haunts down there, a two hundred and fifty mile journey each way.  I got home at 11pm on Sunday night and after a quick tidy round and cuddles for Ginger and a check on the chickens threw myself into bed.  Up bright and early at 7ish the next morning, the henhouse was well and truly cleaned out, I sorted myself out, fed Ginger and sat down at the computer to do a quick Blog post to kick off my No Spend/Low Spend September before going to pick up the dogs from the kennels up the road, then the phone rang .....
﻿ 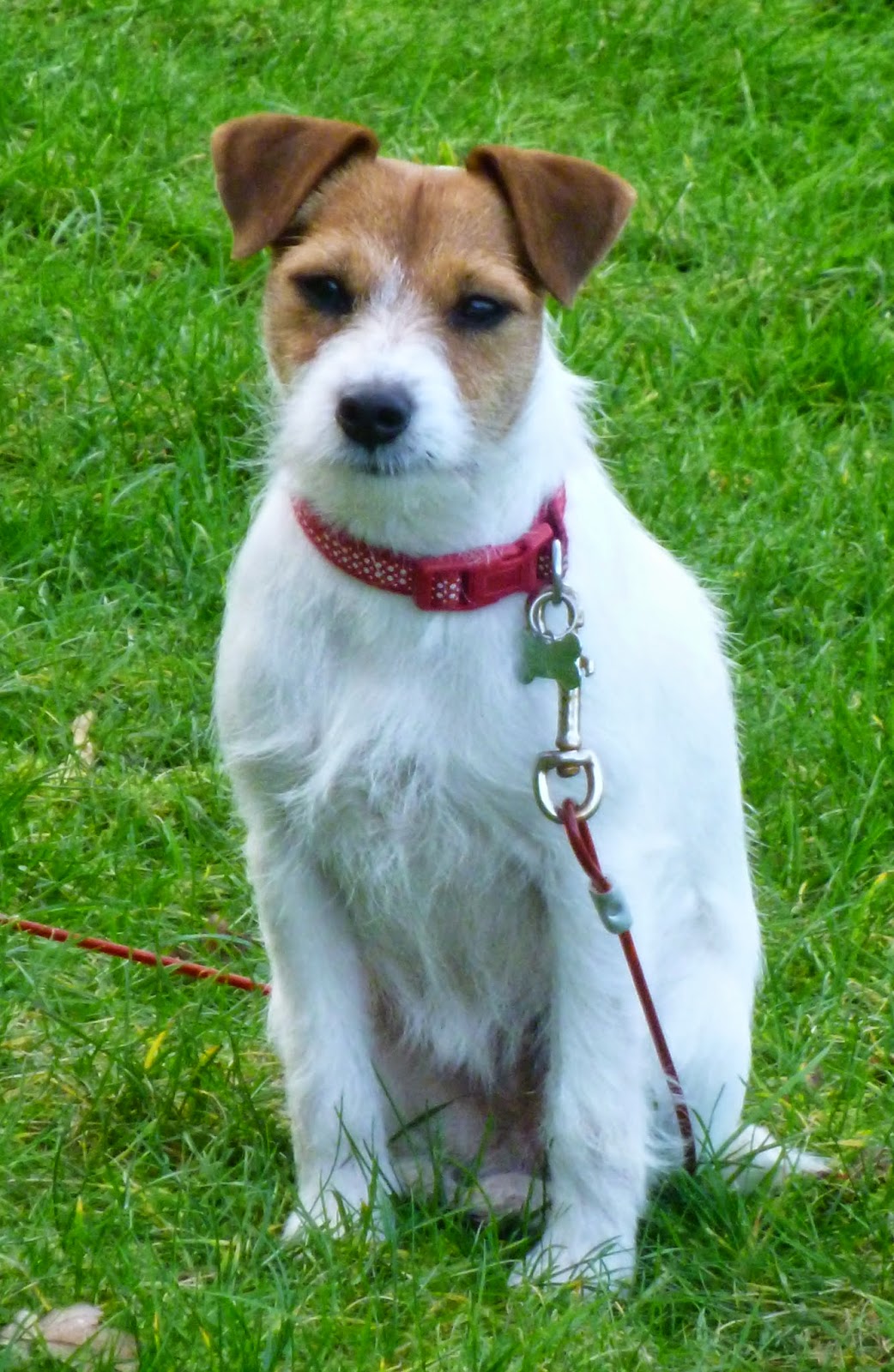 Mavis on 10th April, just before she went missing.
... it was the receptionist at a vets practice in Peterborough saying that Mavis had just been handed in to them, she was 'found wandering the streets'.  I rang around, asked the kennels if they could keep my doggies for another day, let Mum and Lovely Hubby know what I was doing and then set off at midday. 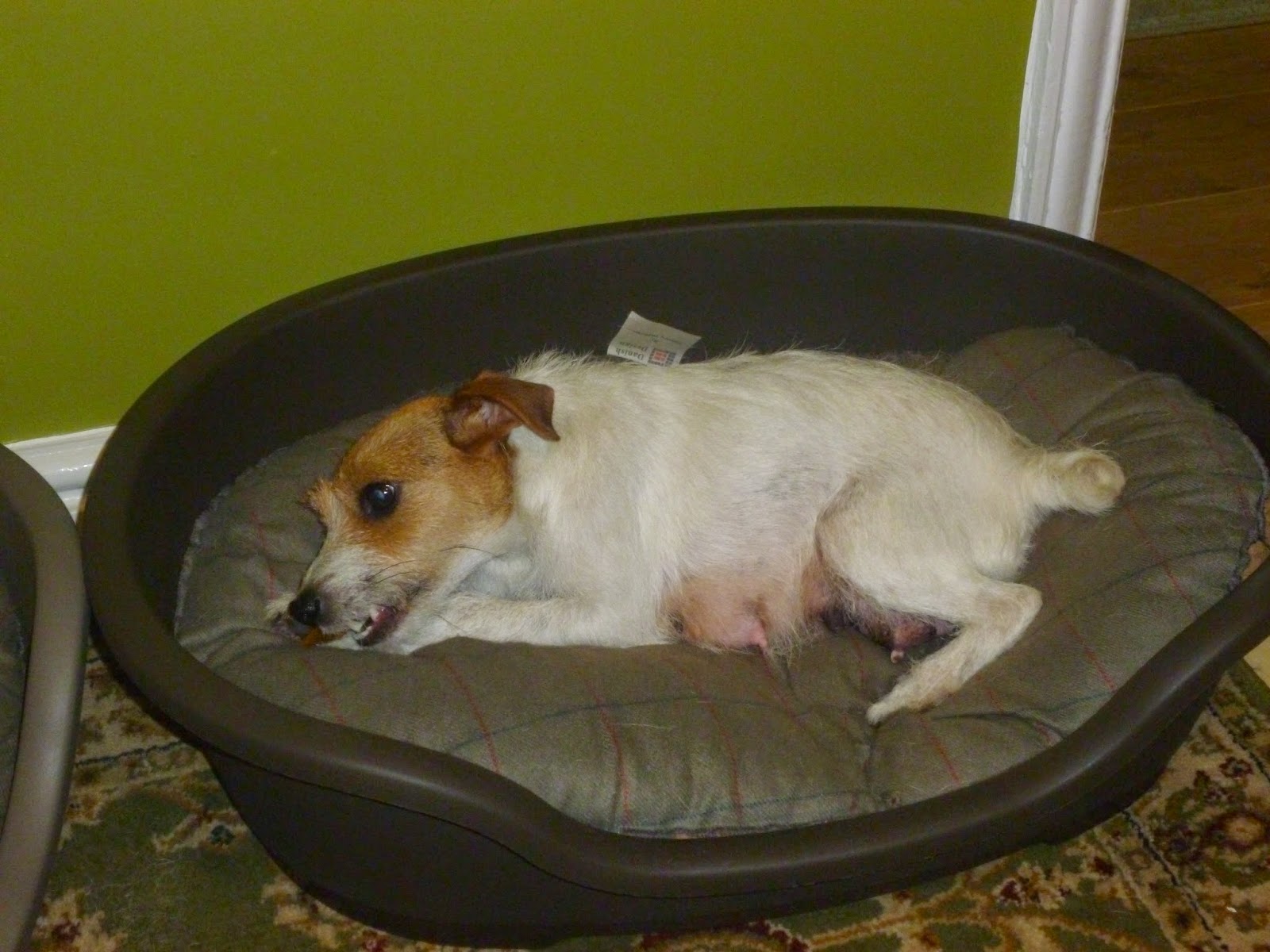 
After a five hundred mile round trip though places I have never visited before later, my gorgeous little Mavis was tucked up in her own bed for the first time in four and a half months.


When she went missing Lovely Hubby thought she had been caught by foxes or badgers and had met a grim end.  I guessed that she may have been picked up by someone returning home after a holiday and kept for themselves and I remember writing that on here that if that was the case, I hoped she had gone to a good home !!
That looks like it was the case .... but she did NOT go to a good home.
Whoever the bastards are that did this (and I DO NOT swear lightly) must have got her pregnant virtually straight away and hoped to make money from her by selling the pups.  I have just got back from our vets and the she reckons that Mavis has had puppies within the last 2 -3 weeks, and probably they have either been taken off her MUCH too early or they have all died, because at the moment she is full of milk.  When they had no further use for her she was dumped.  All I can say is thank goodness for micro-chips. 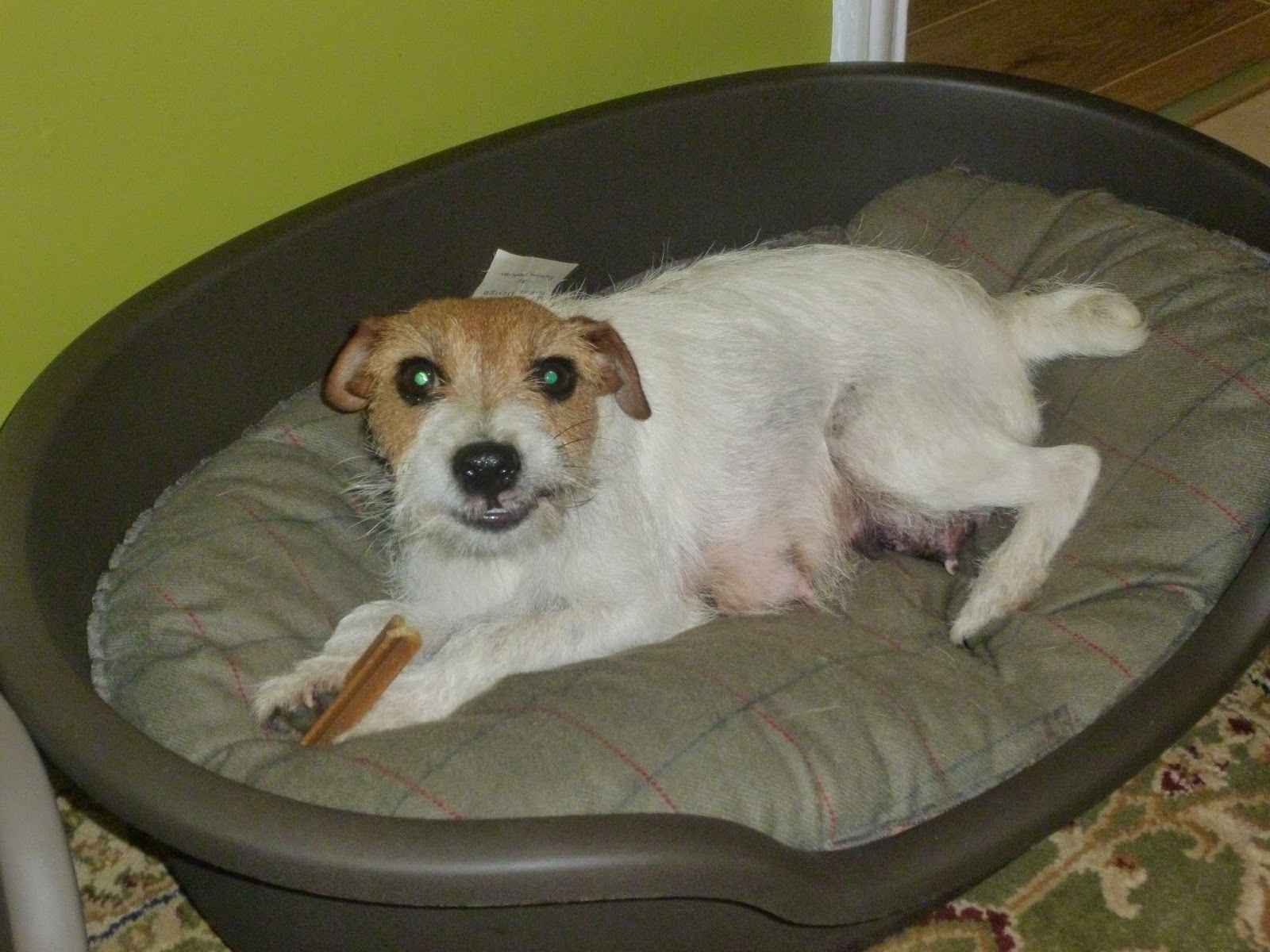 When the nurse at the vets practice in Peterborough led her out to me, Mavis recognised me more than I recognised her.  If it wasn't for those big trusting big brown eyes she could have been a complete stranger.  She was still wearing her spotty red collar although it was now thick with grime, but the tags with our name and contact details, and the one that stated that she was micro-chipped had been ripped off.
The main thing is SHE IS HOME.
She has medication to dry up her milk, some pro-biotics to help her poor gurgling tummy, I have given her a dose of Advocate to get rid of the fleas and worms that she is riddled with, and once that has taken full effect and her 'undercarriage' is less tender she will be bathed.
She is already wearing a new spotty red collar to match her sisters, one that I had bought for Rosy but I can get another.  So while she sleeps off the trauma off the long drive home last night and the early morning visit to the vets, I will be calling an amnesty on my No Spend/Low Spend September and nipping through to the shops to get her a new ID tag and some tasty chicken to get her eating again .... oh and some more Dentastix to try and help with her now chronic bad breath.
Once she has put on some weight (she is once again down to just over 4kg), and returned to full health she will be booked in for spaying and having her teeth sorted out. 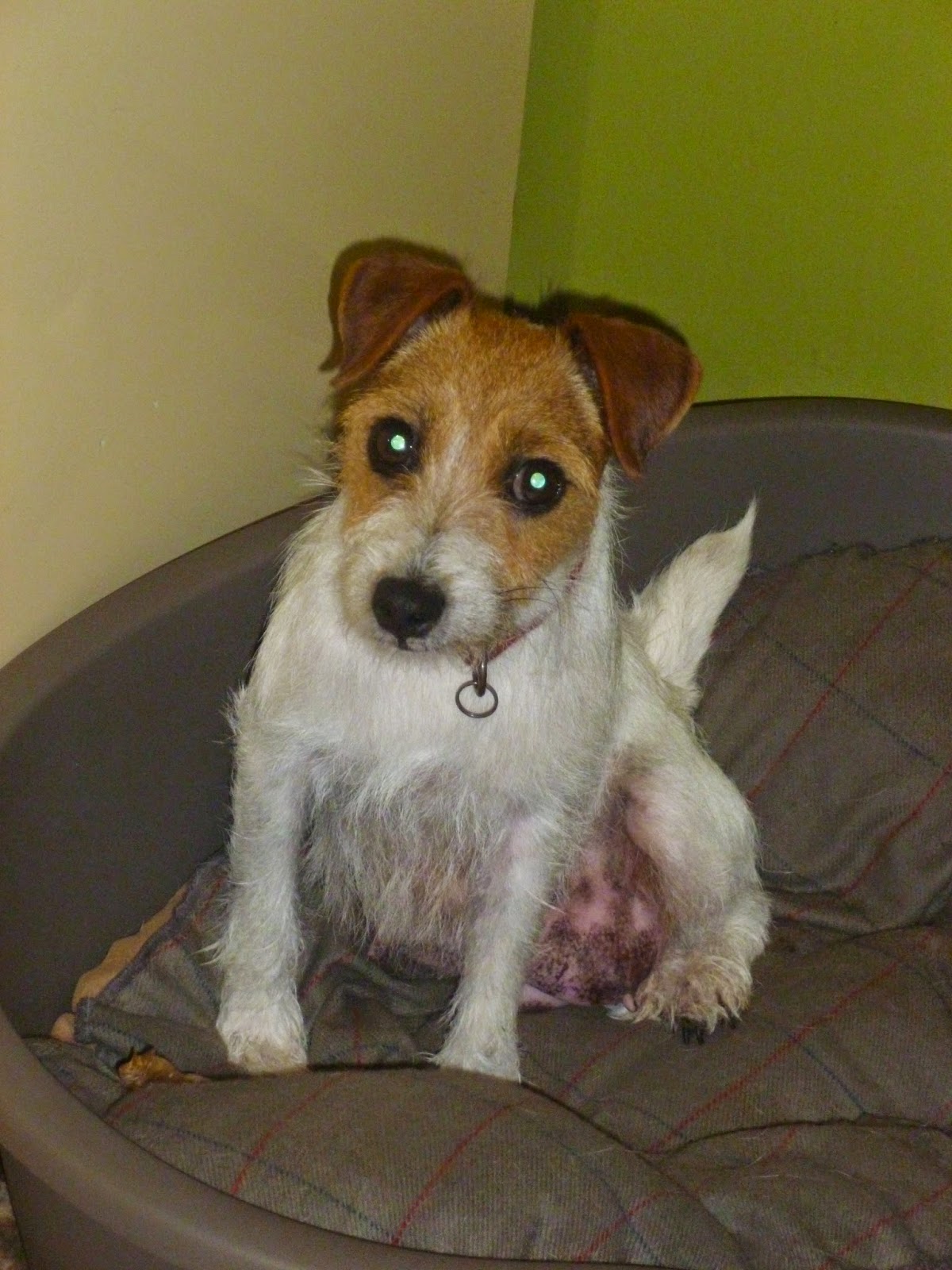 In this picture it was the first time her ears had gone back to their usual position instead of being held fearfully back against the side of her head.  Once you are back in your own bed the world starts to feel a much safer place.
Welcome home Mavis.
Soon you will look more like the Mavis we know and love, but in the meantime you will have to suffer lots of loving and lots of cuddles .... but somehow I think you'll cope.
Mavis's Story
Sue xx﻿
Posted by Sue at 11:22