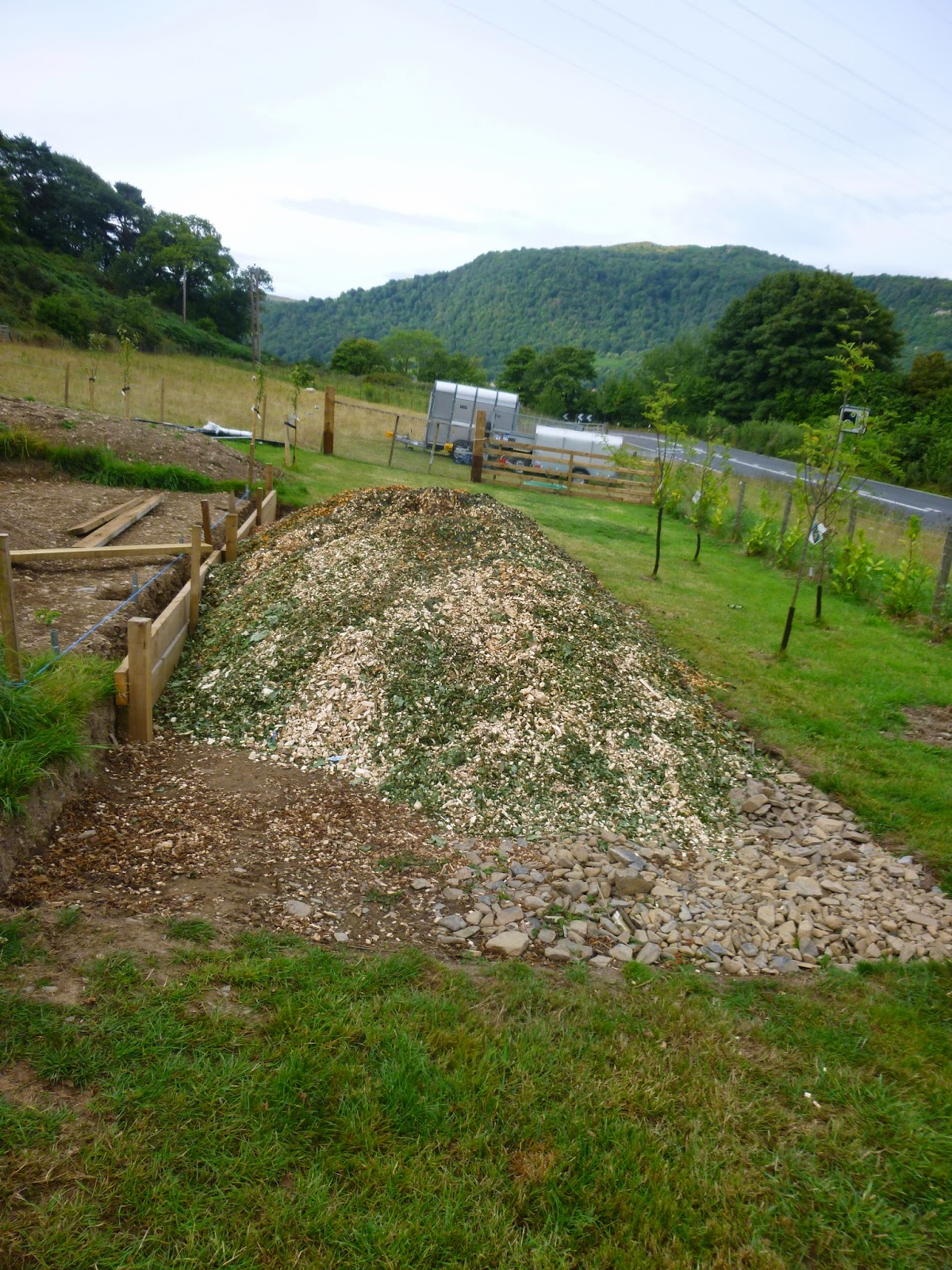 The guys trimming back trees that are encroaching on the electric lines around here, dropped us off two more full loads of chippings yesterday.  Just as Lovely Hubby had made fantastic inroads into the Everest of chippings, the mountain has suddenly grown back to epic proportions.
Still we are not going to look a gift horse in the mouth, these will most definitely be useful to us on the lower paths around the veggie beds and the polytunnels. 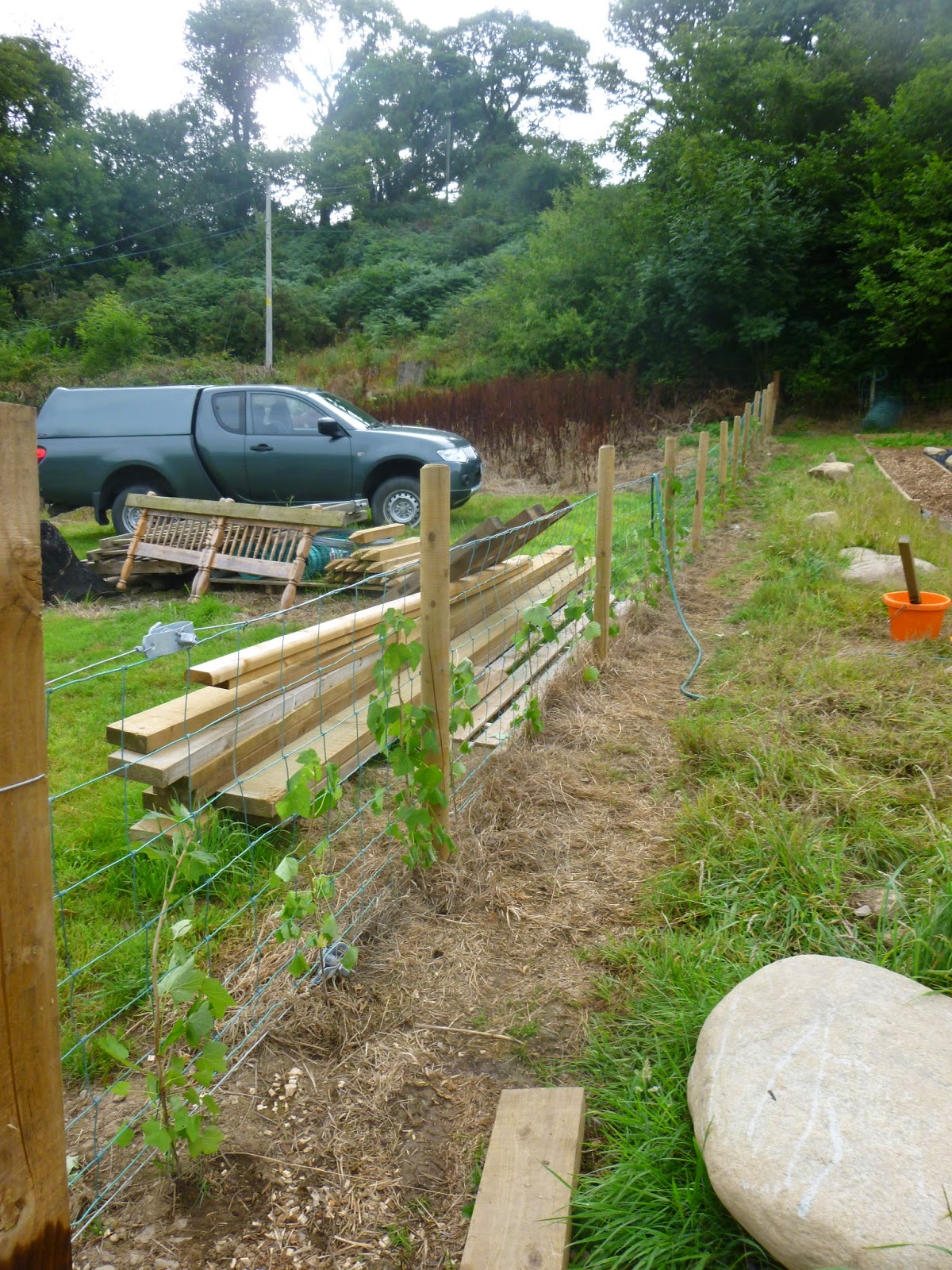 We spent half an hour round at our neighbours on Sunday morning pruning back her currant bushes and Gooseberry bushes for her, and this meant that we had 38 cuttings to plant out on our hillside.
Ten each of Red, White and Black Currants up the run of the hill alongside the fence.  We were going to put them on the other side but the sheep took one look at what we were doing and came over for a snack, so we quickly pulled out the ones we had already planted and re-located them to the house side of the field. 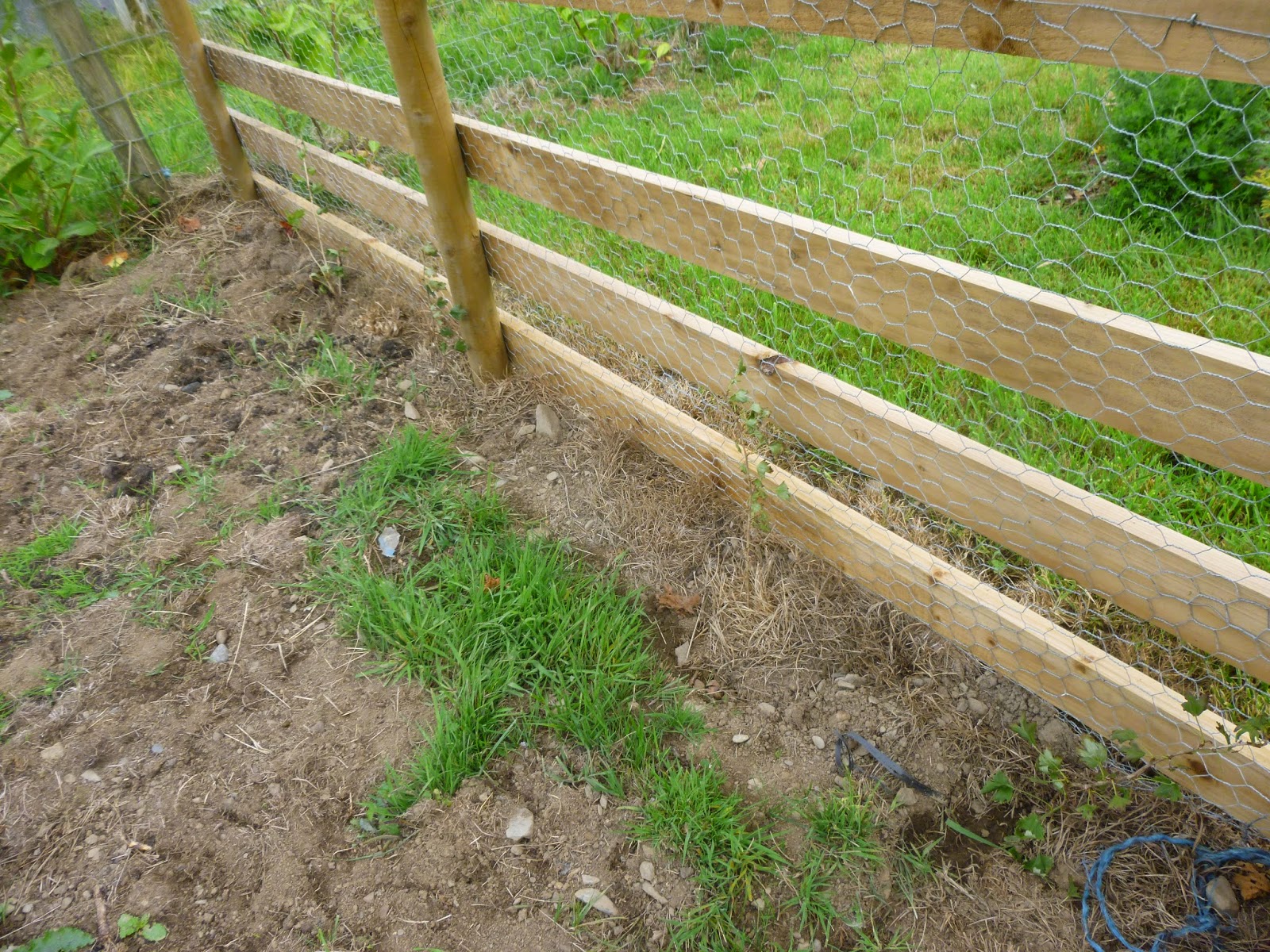 There are five Gooseberry cuttings in here .... 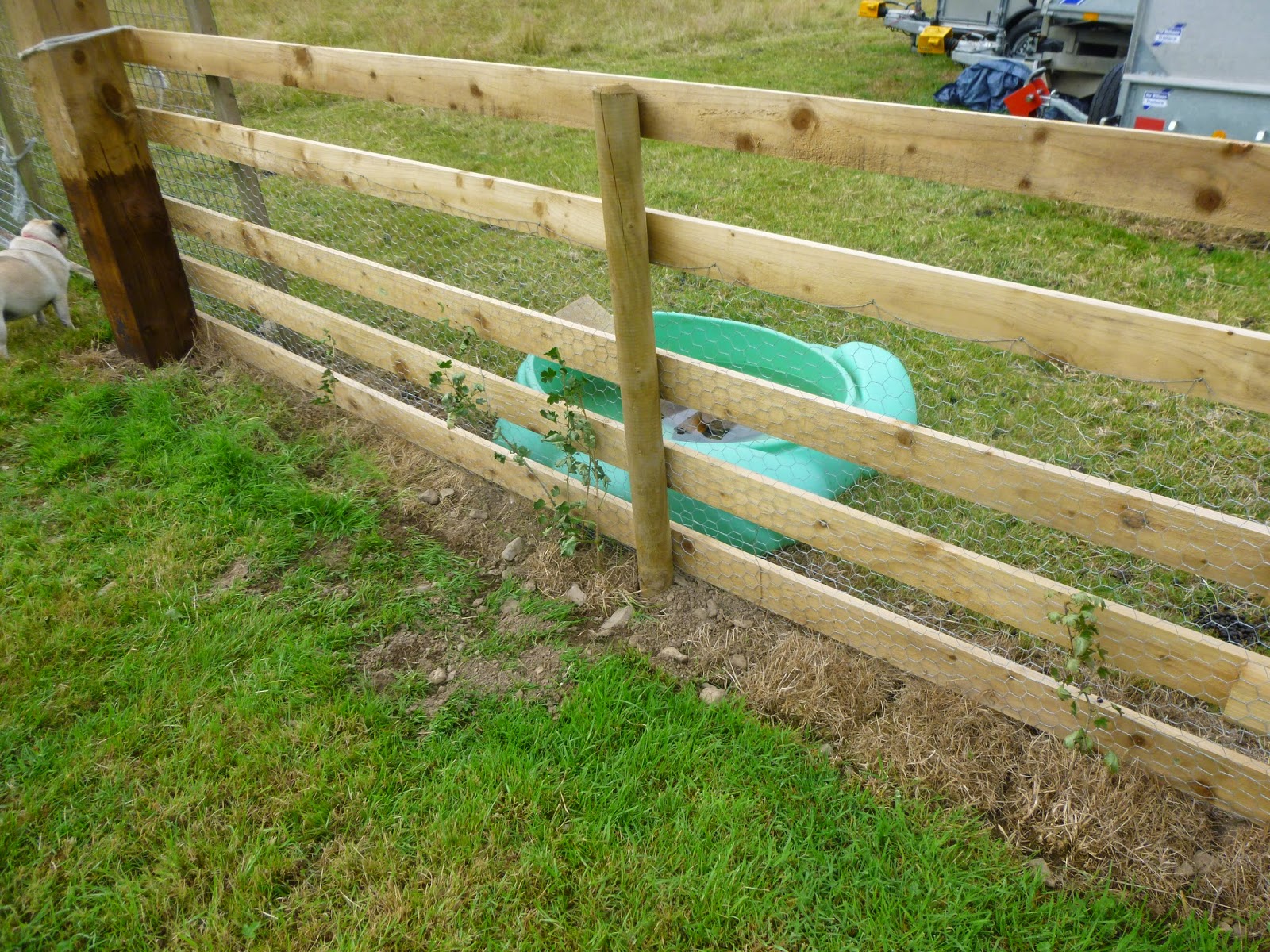 ... and three more on this side, protected from the sheep by the chicken wire skirt along the bottom of the fence.
So just under two hours work meant that we now have 38 fruit bushes planted, and hopefully they will bear fruit in the next year or so.  If we have some that don't take, and I guess that could be as many as a third of them, Mary has said we are just to go back and cut some more.  It's nice to keep what's growing locally local and she has a wonderfully prolific established few acres of land that she has given us permission to plunder. 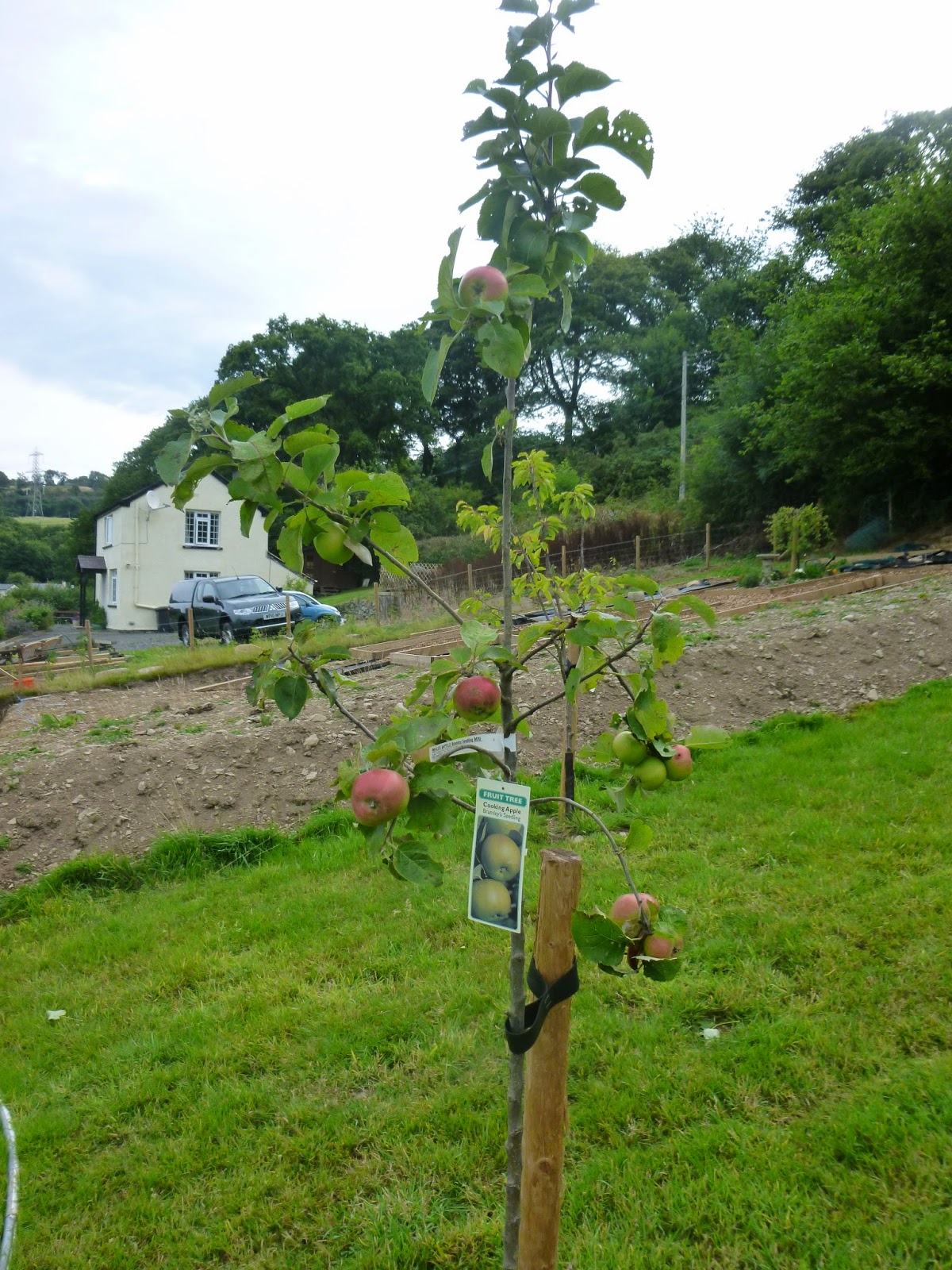 We're not doing too badly ourselves with our fruit this year, I didn't expect any of our new trees to fruit at all and yet we have this lovely little crop of cooking apples .... 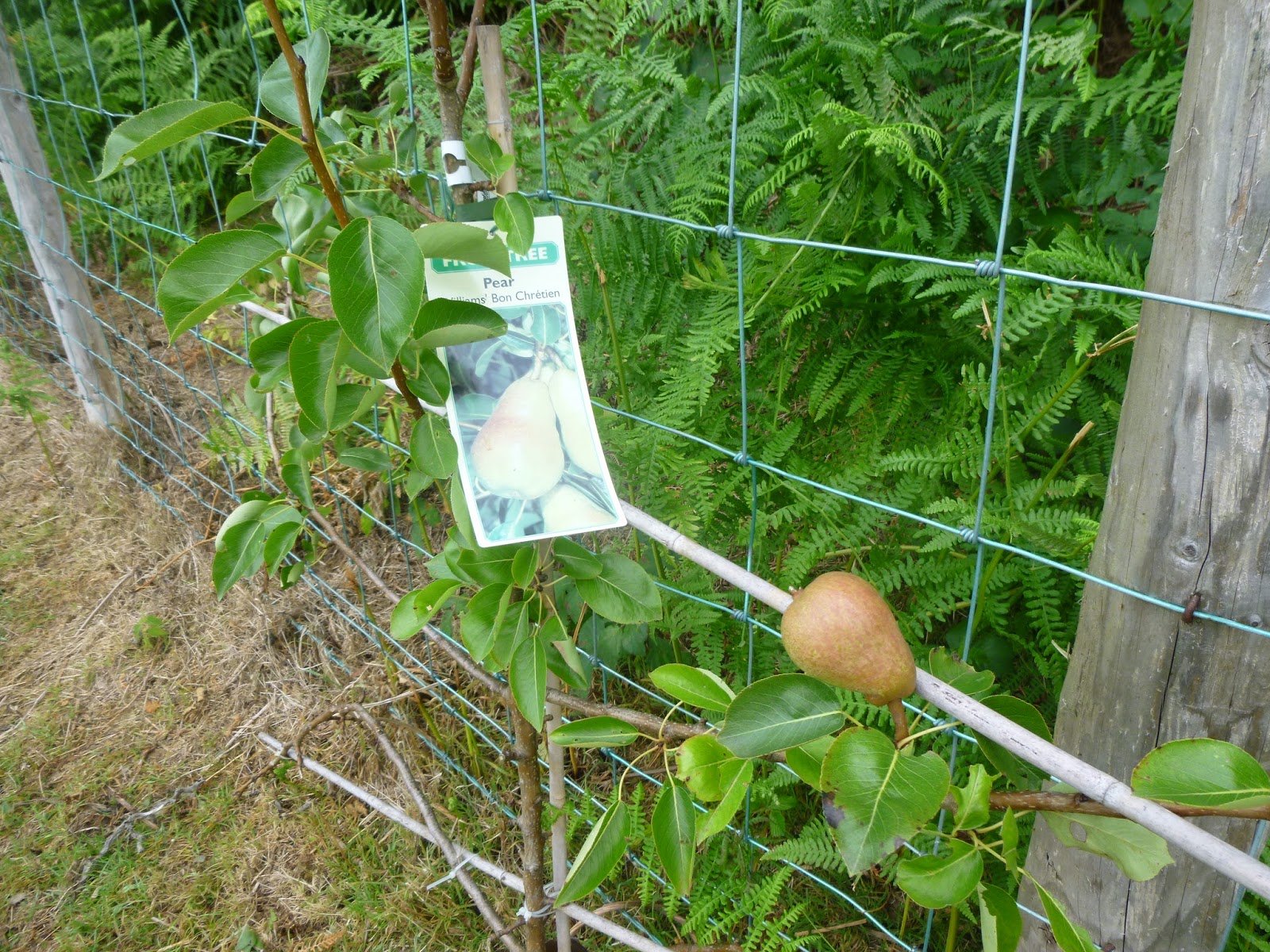 ... a rather lonely solitary pear. 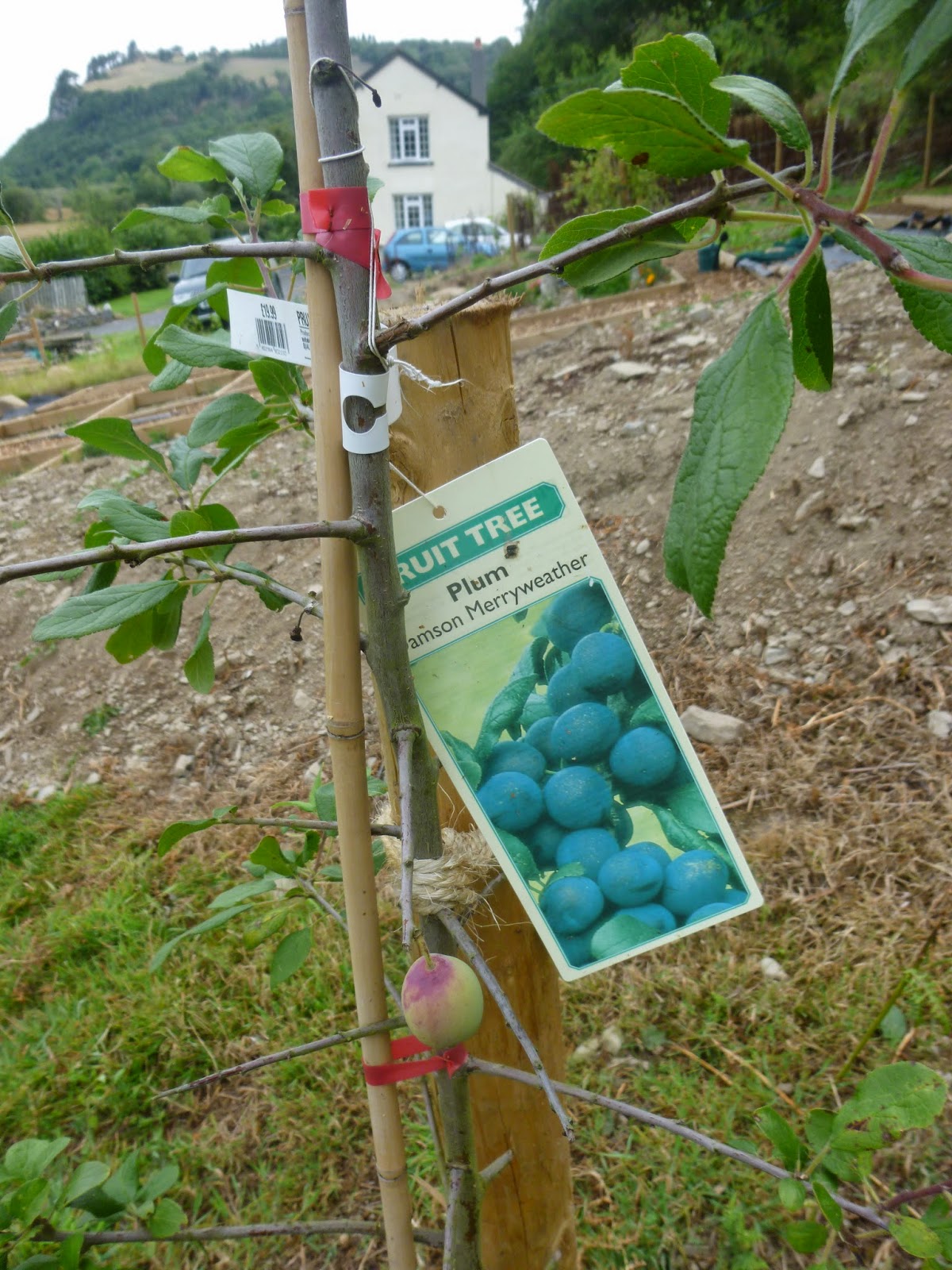 The Plum tree has sprung into action, this is not the only one .... 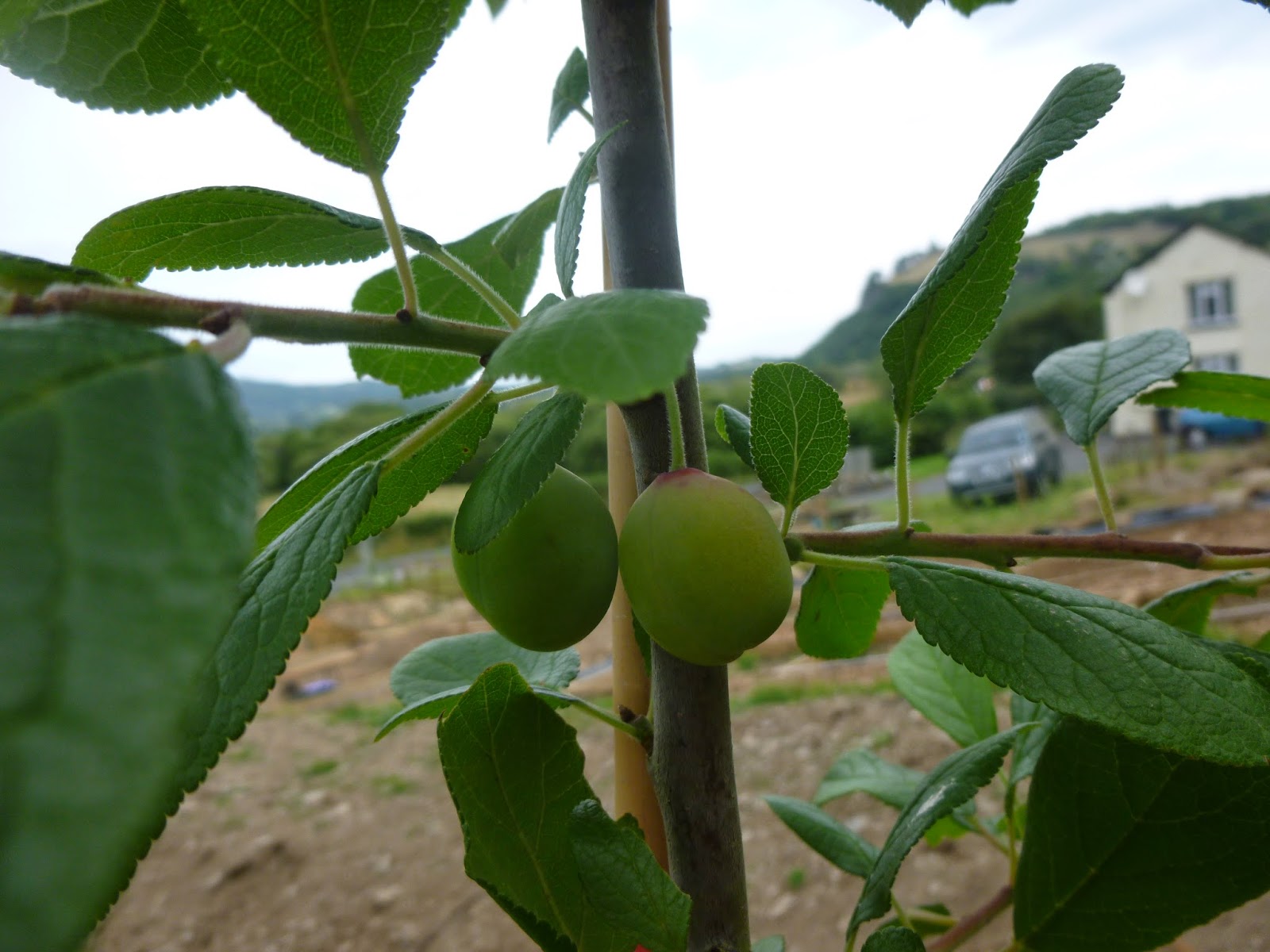 ... there are a couple more clusters further up.
AND ... we have found we have a lovely old Plum tree inside Chicken World, and they are ripening up nicely.  The chickens can have any that fall and we will pick the rest for ourselves.  The chickens are already doing really well out of the windfall apples that rain down on them most days.  We seem to have a couple of very old apple trees on the edge of the woodland that backs onto Chicken World that really need a good prune, now we know which they are we will do this in a couple of months.
So we can grow our own veggies, we have our own fruit trees and bushes, and we have just discovered that we have numerous Cob Nut trees growing amongst the hedges and in woodland behind the veggie patch, so we have some nuts of our own too.  (See more about Cob Nuts HERE,.)  Also the hedges are quickly filling with luscious looking wild Blackberries, which are very early this year, but I am going to make the most of them and pick them as they ripen and pop them straight into the freezer to join the Blueberries that are still fruiting and being gathered daily.
So our self sufficiency drive is all heading in the right direction for next years wish to be able to eat all our own foods and buy in a lot less.
I'm off to pick today's Blackberries and Blueberries now the rain has stopped.
Toodle pip  :-)
Sue xx

Labels: Fruit and Vegetables, Self Sufficiency