Scotch Eggs and Plants .... and No Underpants in Sight 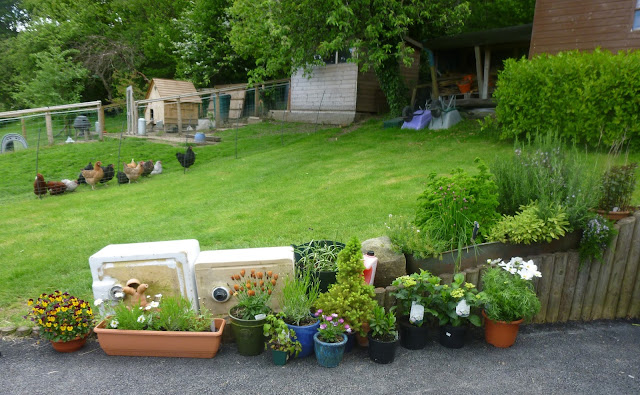 We took a ride out to Trelawnyd yesterday, dropping off emergency supplies to Blogging Buddy John Gray, nothing to do with our shared love of poultry or dogs .... 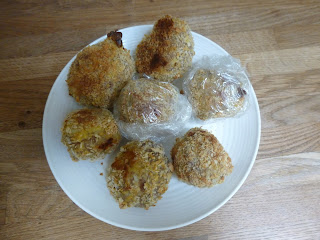 ... just some much needed nourishment in the form of Scotch Eggs.

John's are the ones wrapped in clingfilm ready to be popped into the little cool bag that I left dangling on his door knob,  (I could have made that sound soooo much ruder .... but I didn't, why compete with the master!!)   Lovely Hubby's are the other three little ones, he sampled one straight out of the oven to 'check' they were alright, mine are the big ones made with vegetarian sausages which made them much bigger, which was very handy for identification purposes. 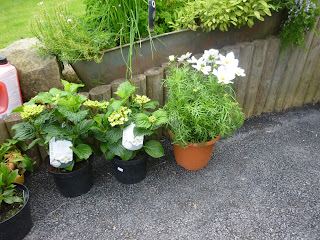 Knowing that John was on night shifts this weekend we timed the visit so as not to wake him unnecessarily, and so that if we did it would be around waking up time anyway.  It worked, as we pulled up Albert was sat on the window side of  the closed curtains upstairs watching us intently and the house was drowsily silent, the sounds of geese and chickens chunnering over the wall was the only noise to be heard.  We left the emergency supplies and quietly drove off.

We had decided to head for the garden centre that John had mentioned in an earlier post just outside the village, the plan was to have a coffee and a browse but we missed the cafe as it was obviously a bit late in the afternoon, so what was a girl to do?   Extra browsing of course, which resulted in three gorgeous plants for the new flower bed that we will have once the front wall has been completed.  We have decided on a white theme and so to start it off we purchased two Hydrangeas and the beautiful Cosmos on the right of the picture.

Oh and the recipe for Scotch Eggs which I have been inundated with requests for ... it's very simple.

Lightly hard boil your eggs.  (I used Pekin Bantam eggs, which explains the diminutive size of the finished article, and which kept the overall calories down for John).  Once cooked and cooled slightly peel the shell off.

Roll this in some beaten egg and then roll in breadcrumbs.

You can then deep fry them, or do as I did and pop them into the oven for around 30 minutes, turning over at the halfway point.

You can eat them hot straight out of the oven or allow them to cool and have them whenever you fancy a healthy and tasty snack .... or alternatively deliver them to a very appreciative, half asleep shift worker who will sit in his garden and eat them in his underpants.